Hawaii plans top tax rate in the US: 16% 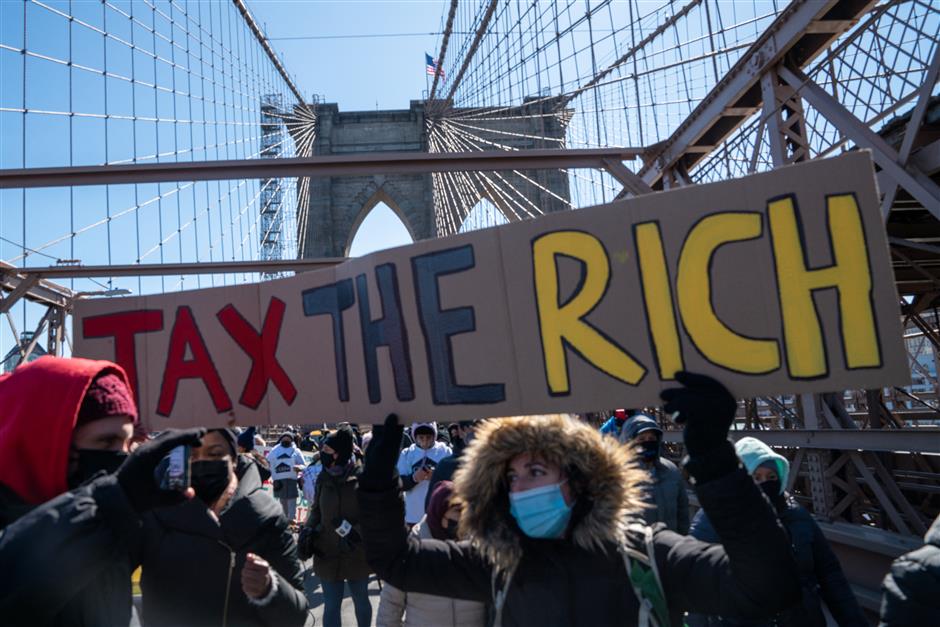 Protesters march across the Brooklyn Bridge holding a sign to “tax the rich” to demand funding for excluded workers in the New York State budget last Friday in New York City.

The US state of Hawaii may overtake California as the state with the highest income tax rate in the country, under legislation slated for a vote this week.

Its proposed new rate would also outstrip the largest combined local and state tax rate in the country, paid by the highest income earners in New York City — 12.7 percent.

The state has suffered a sharp decline in tax revenue as tourism has plummeted, prompting lawmakers to search for new sources of income.

The bill includes hikes to the capital gains tax, corporate tax and taxes on high-end real estate sales in the state.

Senator Donovan Dela Cruz, the committee’s chairperson, said Hawaii has a budget deficit and the governor has warned he may have to furlough government workers.

Dela Cruz said the state has deferred payments to funds for employee pensions and other retiree benefits to keep the government running.

“We are in a dire situation and we are depending on our highest earners and those who are purchasing luxury homes to help us with this situation so that we can ensure that critical services go uninterrupted,” said Dela Cruz, a Democrat.

The bill’s prospects in the House were uncertain. House lawmakers have passed their own legislation raising the capital gains tax. They were expected to vote yesterday on allowing counties to impose a surcharge on the state’s hotel tax.

Dale Arthur Head, a retired Pearl Harbor Naval Shipyard worker who lives on Oahu, submitted written testimony saying many people have lost their jobs during the pandemic and those who have been blessed with more can afford “this modest increase.”

Taxes on the wealthy have been declining for decades while social programs have been cut, he said. “It’s not fair to people towards the bottom.”

Beth Giesting, the director of the Hawaii Budget and Policy Center, said various deductions, exemptions and tax credits mean that Hawaii’s millionaires currently pay an effective tax rate of just 6.8 percent. The bill would increase the amount actually paid by those with high incomes, she said.