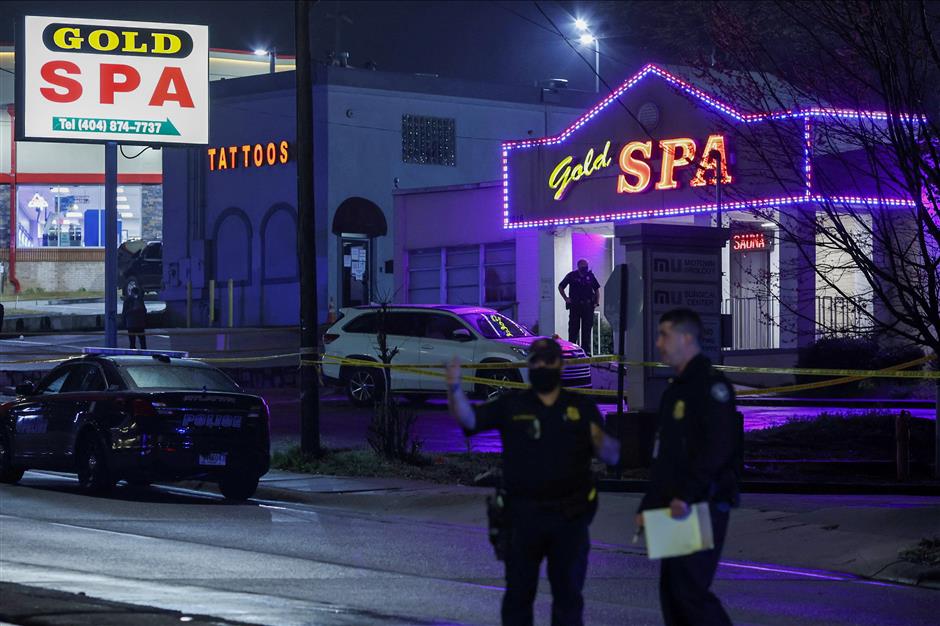 Police officers are seen outside a spa after deadly shootings at a massage parlor and two day spas in Atlanta, Georgia, US, on Tuesday.

A series of shootings over nearly an hour at three Atlanta area massage parlors left eight people dead, including six Asian women, and raised fears that the attack was yet another hate crime against people of Asian descent in the US.

Police arrested a 21-year-old Georgia man and said the motive wasn’t immediately known, but the attacks prompted the New York Police Department’s counter-terrorism unit to announce the deployment of additional patrols in Asian communities there as a precaution.

The attacks began on Tuesday evening, when five people were shot at Youngs Asian Massage Parlor in Acworth, about 50 kilometers north of Atlanta, Cherokee County Sheriff’s Office spokesman Captain Jay Baker said. Two people died at the scene, and three were taken to a hospital where two died, Baker said.

Two women of Asian descent were among the dead there, along with a white woman and a white man, Baker said, adding that the surviving victim was a Hispanic man.

About an hour later, police responding to a call about a robbery found three women dead from apparent gunshot wounds at Gold Spa in Atlanta’s Buckhead neighborhood, which is home to many tattoo parlors and strip clubs. While there, the officers learned of a call reporting shots fired at another spa across the street, Aromatherapy Spa, and found a woman who appeared to have been shot dead.

All four women killed in Atlanta were of Asian descent.

Robert Aaron Long, 21, of Woodstock in Cherokee County, was taken into custody in Crisp County, about 240km south of Atlanta. Baker said that investigators were “very confident” that the same suspect was the gunman in all three shootings.

South Korea’s foreign ministry said its consulate-general in Atlanta had confirmed that the victims included four women of Korean descent but was verifying their nationality.

US Secretary of State Antony Blinken, who is in South Korea meeting with Foreign Minister Chung Eui-yong, mentioned the killings during an opening statement. “We are horrified by this violence which has no place in America or anywhere,” he said, noting that four of the women were believed to be of Korean descent.

The shootings come as reports of attacks against Asian-Americans have spiked in recent months — fueled during the pandemic, activists believe, by talk of the “Chinese virus” by former president Donald Trump and others.