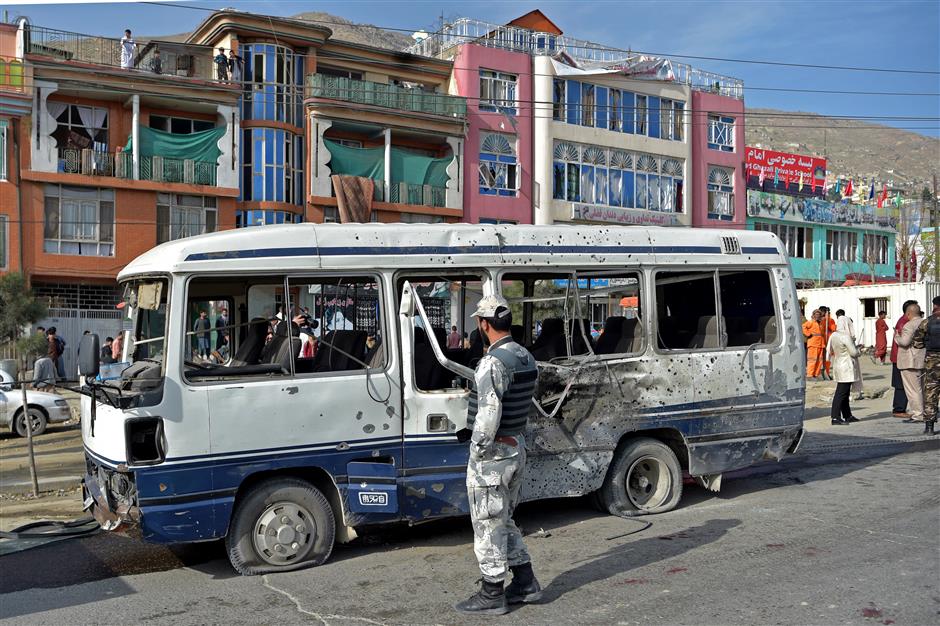 The bus in which four people died in Kabul after a roadside bomb exploded on Thursday.

US President Joe Biden has said that it would be “tough” to meet the deadline to withdraw American troops from Afghanistan by May 1, as agreed with the Taliban in a deal secured under Donald Trump.

The Taliban insurgents have largely stuck to a promise not to attack US or other foreign troops since the agreement was struck in February last year, but they say the date to end America’s longest war is inflexible.

“Could happen, but it is tough,” Biden said when asked about the May 1 deadline in a TV interview broadcast on Wednesday. “I’m in the process of making that decision now.”

The Taliban quickly reacted to Biden’s comments, with a spokesperson saying there would be “consequences” if the United States did not stick to the agreed timetable — further increasing pressure on the fragile peace process.

Biden also took a direct swipe at Trump’s Afghanistan policy, saying it “was not a very solidly negotiated deal” that the then-president oversaw.

“The failure to have an orderly transition from the Trump presidency to my presidency ... has cost me time and consequences. That’s one of the issues we’re talking about now, in terms of Afghanistan,” he added.

The US is supposed to pull out all its troops by May 1 in an agreement that saw the Taliban agree to peace talks with the Afghan administration of President Ashraf Ghani.

The insurgents also vowed not to allow territory to be used by “terrorists” — the original goal of the US invasion following the September 11, 2001 attacks.

But the supposed peace talks held in Qatar since September have made little progress.

Washington wants to jump-start the process and get the Taliban and Afghan government to agree to some form of power-sharing. Major urban centers in Afghanistan are in the grip of a worsening terror campaign in the form of deadly attacks targeting politicians, civil servants, academics, rights activists and journalists.

As the May withdrawal deadline looms, Russia was yesterday to host a conference featuring high-level delegations from the Taliban and the Afghan government.

At the talks, the insurgents will be led by the Taliban’s co-founder and deputy leader Mullah Abdul Ghani Baradar.

The Afghan government side is headed by former Chief Executive Abdullah Abdullah.

Analysts suggest a face-saving compromise on the US withdrawal could be hashed out because Washington says it has met its obligations while leaving some US experts attached to Afghan forces in advisory roles.