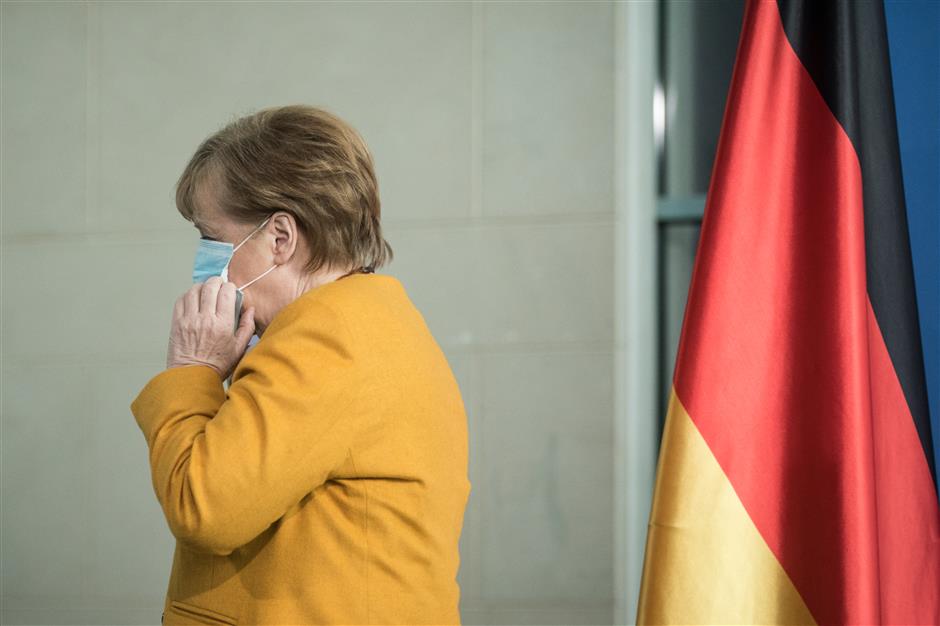 German Chancellor Angela Merkel leaves after giving a statement following talks via video conference with Germany's state premiers, at the Chancellery in Berlin on Wednesday.

German Chancellor Angela Merkel on Wednesday reversed a planned strict Easter shutdown for the country amid massive criticism of the government’s pandemic management.

Merkel and the leaders of Germany’s 16 states agreed at marathon talks on Monday that almost all shops were to be closed on April 1-5, with only grocers allowed to open on April 3.

But they have now scrapped that measure, instead appealing to the public to stay at home over the Easter weekend, CDU party chief Armin Laschet told a regional parliament meeting in the state of North Rhine-Westphalia.

The leaders had agreed the measure was “a mistake and not enforceable in this form,” he said.

Merkel had called an unexpected crisis meeting yesterday as a backlash over the pandemic measures sent her CDU party’s ratings plummeting.

Der Spiegel news magazine said the chancellor had admitted the Easter shutdown was a “mistake.”

“Merkel and the (state leaders) have lost sight of the real problem,” it said.

Der Spiegel called the measures a “scandal,” saying the government had “completely the wrong priorities” and should focus on improving its vaccination campaign.

Infections continue to rise in Germany, with 15,813 new cases reported in 24 hours yesterday by the Robert Koch Institute health agency.

“The situation is serious. Case numbers are rising exponentially and intensive care beds are filling up again,” Merkel said after Monday’s meeting.