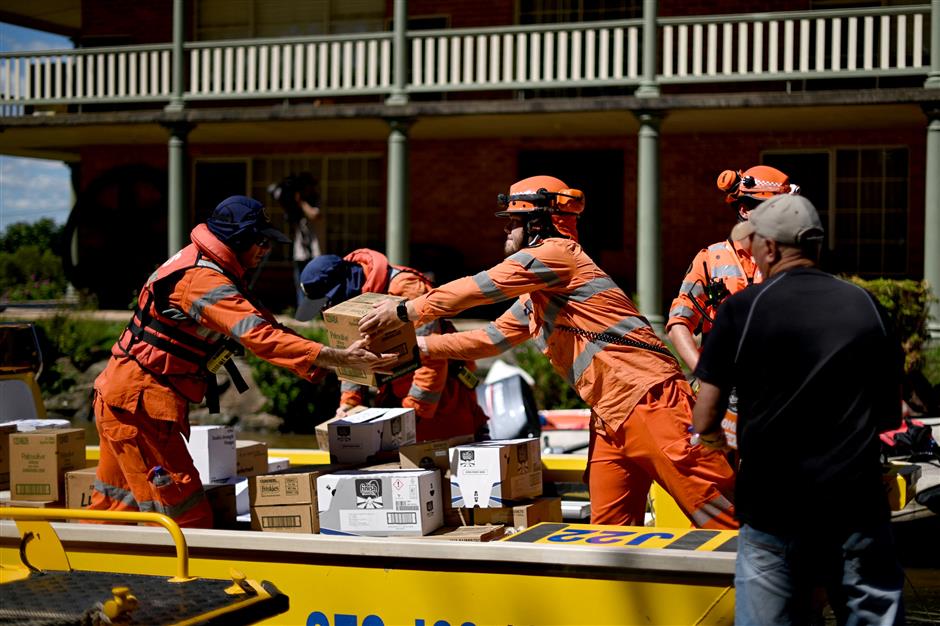 State Emergency Service crew and locals load relief goods onto boats during rescue operations at a flooded residential area in the Windsor suburb of northwestern Sydney on Wednesday.

The bodies of two men were found in Australia on Wednesday in cars trapped in floodwaters, the first deaths linked to wild weather in recent days that has submerged houses, swept away livestock and cut off entire towns.

More than 40,000 people have been forced to flee their homes as torrential rain sparked dangerous flash floods, and authorities issued new evacuation orders for residents of Sydney’s western regions.

In some other areas, a massive cleanup operation began as sunny skies returned for the first time in days, and food and other emergency supplies were flown in over swamped roads.

Authorities were trying to contact the family of a Pakistani national whose body was found by emergency services in a car under 6 meters of water in Sydney’s northwest.

Police had determined the man was driving a brand new car, on the first day of a new job and was unfamiliar with the rural area, New South Wales Police Detective Inspector Chris Laird said. The reason he could not get out of the vehicle was being investigated.

“It could very well be that the electrics totally failed and he was simply unable to escape from the car which is an absolute tragedy,” Laird said.

Gladys Berejiklian, premier of New South Wales, the worst-hit state, warned water levels would keep rising in some areas as major dams overflowed and rivers bulged, with thousands of people on evacuation watch.

“Catchments will continue to experience flows of water not seen in 50 years and in some places 100 years,” Berejiklian told reporters.

The Insurance Council of Australia, the main industry body, said about 17,000 damages claims worth about A$254.2 million (US$193.32 million) had been lodged by yesterday morning across New South Wales and Queensland.

Homes have been submerged, livestock swept away and crops inundated.

“The expanse of water that went right across that region was quite devastating to see,” Morrison said in parliament after he toured flood-affected areas by helicopter.