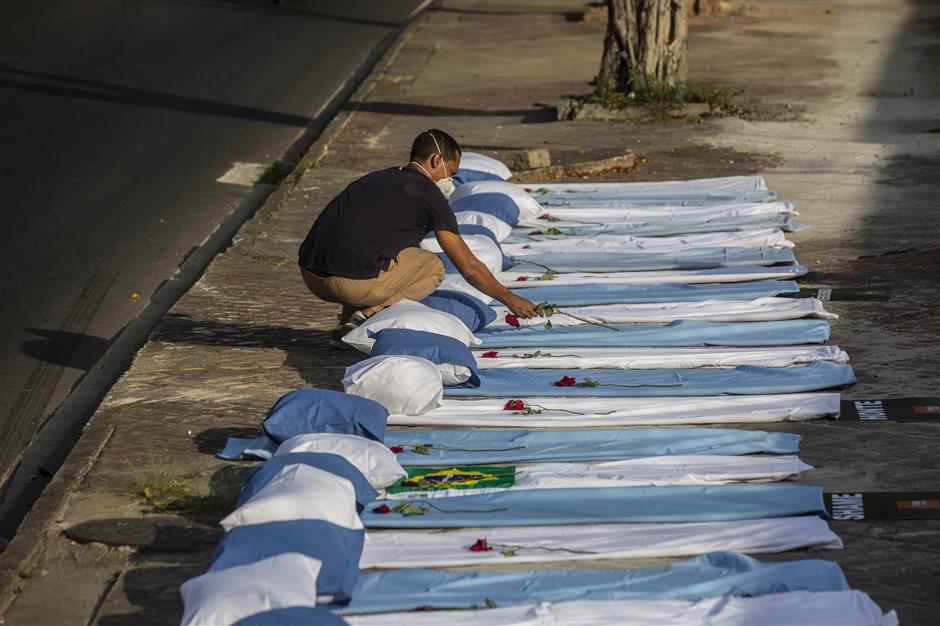 A demonstrator places a rose on a blanket arranged to resemble a gurney during a protest against the government’s pandemic response outside of the Raul Gazzola hospital in Rio de Janeiro, Brazil on Wednesday.

As the number of COVID-19 deaths in Brazil passed 300,000 on Wednesday, President Jair Bolsonaro’s fourth health minister used his first official day in the job to pledge a vaccination goal of 1 million shots a day to put the brakes on the snowballing crisis.

Latin America’s biggest country, already home to the world’s second-highest coronavirus death toll after the United States, has become the global epicenter of COVID-19 deaths, with one in four global fatalities currently a Brazilian.

The outbreak is reaching its worst stage in the country, fanned by a patchy vaccine rollout, an infectious new variant and a lack of nationwide public health restrictions.

The scale of the outbreak is placing fresh pressure on Bolsonaro, a former army captain who has won international notoriety for his efforts to block lockdown measures, sow doubts over vaccines and push unproven cures like hydroxychloroquine.

In his first news conference as health minister on Wednesday, a day after Brazil recorded a record death toll of 3,251 fatalities, Marcelo Queiroga said the government aims to speed up the inoculation drive and pledged to deliver 1 million shots a day.

He added that vaccinations, masks and social distancing are all key to slowing the virus, and that nobody wants lockdowns, especially as Brazilians are unlikely to adhere to them. Queiroga said he would focus on science and transparency.

As the pandemic has worsened in recent weeks, Bolsonaro has showed signs of taking it more seriously.

The return of his political nemesis, former President Luiz Inacio Lula da Silva also appears to have stirred him into action.

Lula’s corruption convictions have recently been annulled, allowing him to run in next year’s election.

On Tuesday, Bolsonaro gave a televised address in which he defended his handling of the pandemic, and pledged to deliver more vaccines.

But his comments were jeered by pot-banging protests across the continent-sized country.