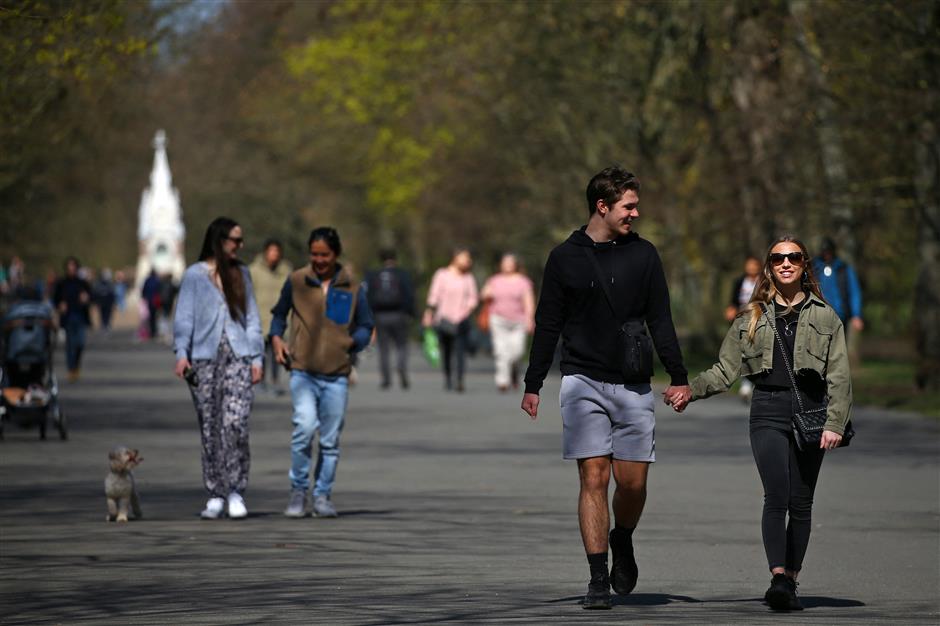 People go for a walk in the warm weather in Regent’s Park in London on Monday, as England’s third COVID-19 lockdown restrictions ease, allowing groups of up to six people to meet outside.

England entered the second phase of its lockdown easing on Monday thanks to a successful vaccination drive, but the government is urging vigilance as another wave of coronavirus sweeps Europe.

After schools reopened on March 8, England’s stay-at-home order has been relaxed to enable outdoor gatherings of up to six people, or two households, in what newspapers have dubbed “Happy Monday.”

Prime Minister Boris Johnson said he hoped that Monday “will kick-start a Great British summer of sport — with people of all ages reunited with teammates, and able to resume the activities they love.”

But in a video message posted on Twitter, he urged people to enjoy their new freedoms cautiously.

“It’s vital that we don’t overdo it and risk all the progress we’ve made,” Johnson said, in a nod to Britain’s much-reduced coronavirus infection, hospitalization and death rates compared to earlier this year. “Please follow the new rules carefully so that we can gradually get back to normal together.”

In the third phase of reopening from April 12, the government plans to allow outdoor drinking in pub gardens, while hairdressers and non-essential retail will open in England.

Limited indoor mixing in hospitality premises will be allowed from mid-May, while many other remaining restrictions will be lifted on June 21, if the outlook remains positive.

The devolved governments of the United Kingdom’s other nations — Scotland, Wales and Northern Ireland — are moving at their own pace.

With more than 126,000 deaths, Britain has one of the world’s worst mortality rates from the pandemic. But the level of new infections has been falling since early January and is now averaging around 5,000 cases a day.

Meanwhile on Sunday the country passed the milestone of inoculating more than 30 million adults with a first coronavirus vaccine dose.

Britain has so far been using two jabs, developed by Oxford University/AstraZeneca and BioNTech/Pfizer.

The first batch of 17 million doses of US company Moderna’s vaccine is set to be delivered next month, easing concerns about a shortfall in supplies.

The government has insisted it is on course to hit its target of offering a first jab to all adults by the end of July, and that follow-up second doses are also on target.

While conceding that continental Europe’s latest wave of COVID-19 could hit Britain within weeks, Johnson said at the weekend that the “key difference” was the country’s vaccination drive.

“And as things stand, I can see absolutely nothing in the data to dissuade me from continuing along our road map to freedom,” he added.