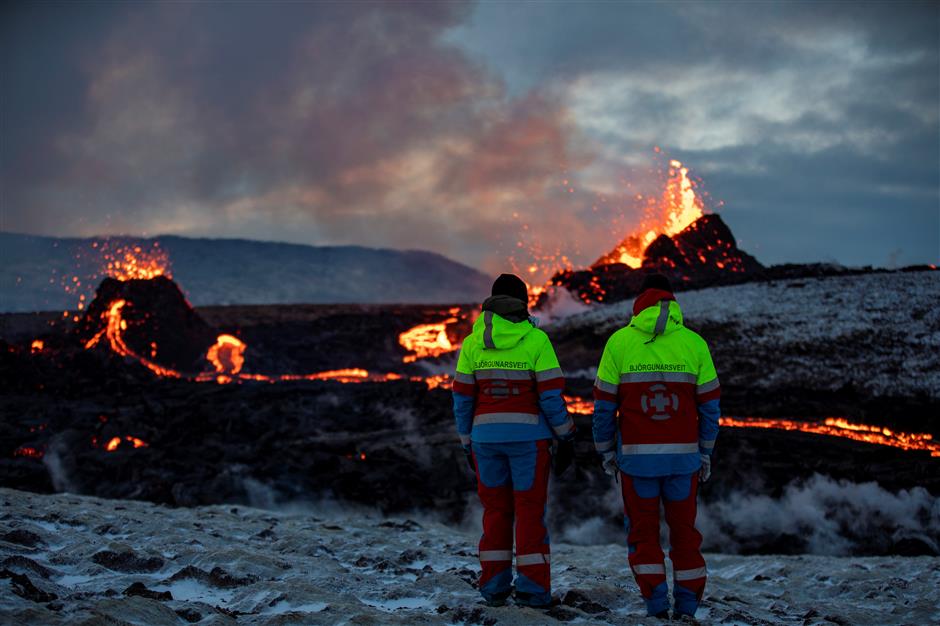 Lava is flowing from a third fissure that opened overnight in Iceland’s nearly 3-week-old volcanic eruption near the capital Reykjavik, officials said yesterday.

The spectacular eruption began on March 19 when a first fissure disgorged a steady stream of lava, flowing into the Geldingadalir valley of Mount Fagradalsfjall on Iceland’s southwestern tip.

The new split comes two days after two fissures opened around 700 meters from the initial eruption, creating a long molten rivulet flowing into a neighboring valley.

The new lava stream, about a meter deep and 150 meters long, is a new draw for tens of thousands of gawkers taking advantage of the site’s relatively easy access, just 40 kilometers from Reykjavik.

It is about half a kilometer from the craters of the initial eruption.

State broadcaster RUV showed a flash of light appearing at the site around midnight, about halfway between the two sites of the earlier eruptions, gushing lava in small spurts and belching smoke.

The new river of bright orange magma flowed down the slope to join an expanding field of lava at the base, now covering more than 33 hectares, according to the last press briefing by the Icelandic Meteorological Office late on Tuesday.

The site had been closed to the public on Monday because of the new activity, then reopened early yesterday.

Icelandic experts, who initially thought the eruption would be a short-lived affair, now think it could last several weeks or more.