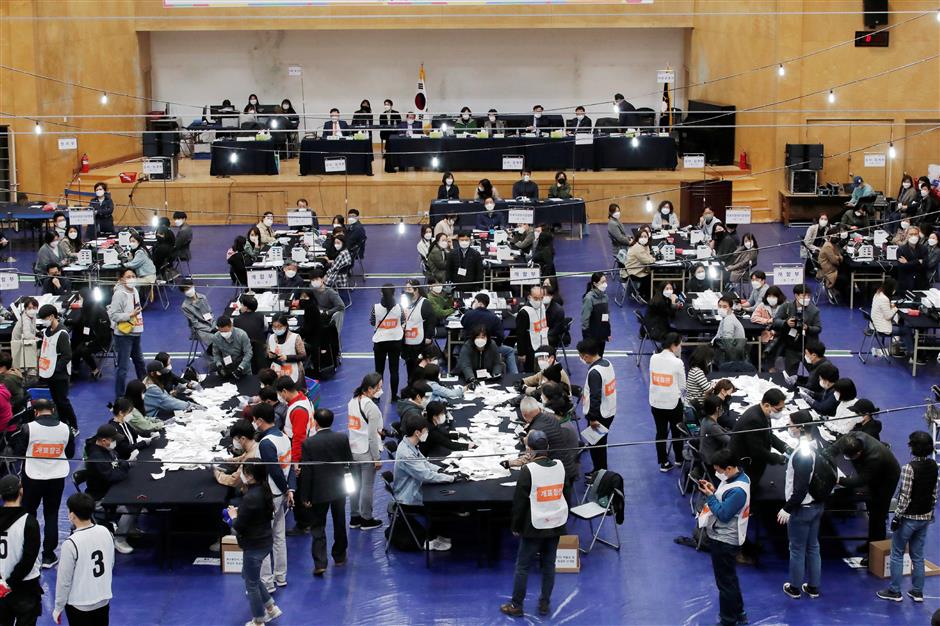 Staff of the Central Election Commission of South Korea counting votes in Seoul.

South Korea’s conservative opposition party has won sweeping victories in mayoral by-elections in the country’s two biggest cities, a blow to President Moon Jae-in ahead of next year’s presidential vote.

Oh Se-hoon of the opposition People Power Party won 57.5 percent of the votes cast in Wednesday’s election in Seoul, according to the final vote tally released by the National Election Commission. Park Young-sun of the ruling Democratic Party won 39.2 percent.

In recent months, Moon and his ruling party have been grappling with falling approval ratings due to soaring house prices, allegations of real estate speculation involving public officials and other purported policy missteps.

Moon said yesterday he would “gravely” accept the election results, calling them “the people’s reprimand” of his government.

Later in the day, top Democratic Party leaders offered to resign to take responsibility for the election defeat.

Moon, whose single five-year term ends in May 2022, is barred by law from seeking a reelection.

According to recent opinion surveys, former prosecutor general Yoon Seok-youl, who quit following disputes with Moon allies, is the early favorite in next year’s election. Yoon hasn’t formally announced his bid and it’s unclear on which party ticket he would run.

Lee Jae-myung, the governor of Gyeonggi province surrounding Seoul, and former Prime Minister Lee Nak-yon, have been ranked the second and third in the surveys. Both are Democratic Party members.

Moon, who champions rapprochement with the Democratic People’s Republic of Korea, had an approval rating of more than 80 percent after his first summit with DPRK leader Kim Jong Un in 2018.

He was a driving force behind now-stalled US-DPRK nuclear diplomacy. But ties between the two Koreas are strained after the DPRK urged his government not to meddle in its dealings with Washington.