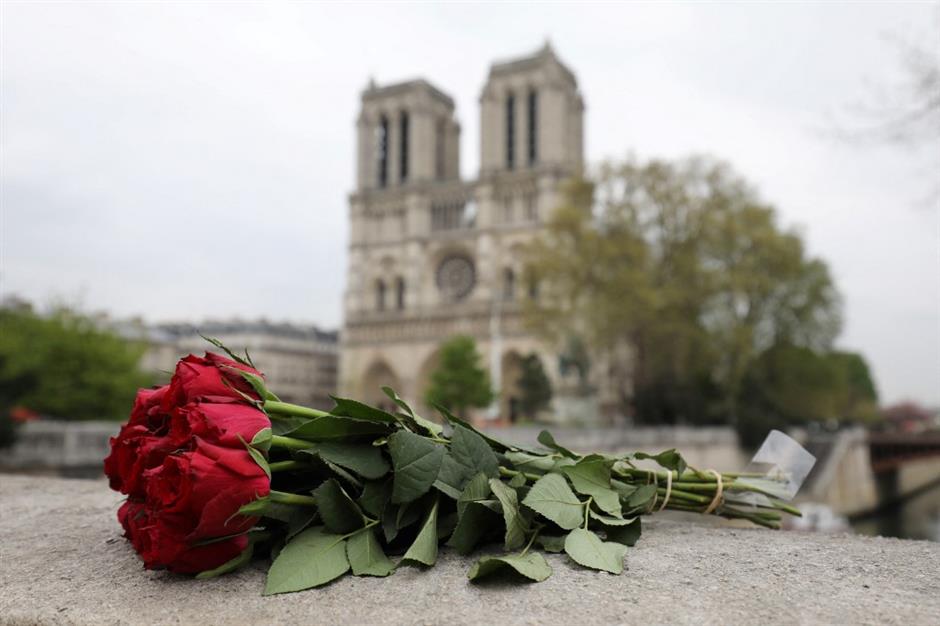 In this file photo taken on April 16, 2019 Roses have been laid near Notre-Dame-de Paris Cathedral a day after a fire devastated the cathedral in central Paris. April 15, 2021 marks the two years anniversary of the fire that devastated Notre-Dame-de-Paris Cathedral, in the centre of the French capital.

On the evening of April 15 2019, France and the world watched transfixed in horror as flames ravaged Notre-Dame cathedral in Paris, fearful that the heritage landmark could be lost to humanity forever.

While the spire collapsed and much of the roof was destroyed, the efforts of firefighters ensured the great mediaeval edifice survived the night. Yet the road to restoration has been long and arduous and it is only expected to return to its former glory in April 2024, five years after the fire.

The cause of the blaze remains a subject of uncertainty, although investigators are so far rejecting any idea of foul play and focusing on a short-circuit or even a dropped cigarette as possible explanations.

With at least two TV dramas and one feature film in the pipeline about April 15, the drama of that night and the race to save the 850-year-old building looks set to be further graven in the public memory.

It was President Emmanuel Macron who set the five-year restoration target in the immediate aftermath of the fire, which would mean the cathedral could be visited again when Paris hosts the 2024 summer Olympics.

"We are on course to return the cathedral for worship in 2024. But there is still a lot of work," Jean-Louis Georgelin, the straight-talking former general handpicked by Macron to lead the restoration efforts, said last month.

The actual restoration work has yet to begin. Time up until now has been spent on securing the building, including the painstaking task of removing 40,000 pieces of scaffolding calcified in the fire.

This should be finished in the summer, allowing the full restoration works to begin early next year.

The aim is to celebrate the first full service in the restored cathedral on April 15, 2024, despite delays caused by the pandemic and the lead that filtered out during the blaze.

The drive is helped by some 833 million euros ($991 million) collected in a national and international donation campaign launched immediately after the fire, although this alone may not be enough to push the restoration over the finishing line.

Of that 70 million euros ($83 million) came from abroad, half of that sum from the United States.

Already, some 1,000 specially-selected oak trees are drying out to reconstruct the spire — which Macron had been tempted to replace with a modern touch but will now be rebuilt as it was — and the crossing of the transept.

The interior of the cathedral is today marked by a web of scaffolding, surrounded by nets and tarpaulins, where carpenters, rope workers, scaffolders and crane operators hurry around.

Along with hundreds of experts seeking to secure and restore the cathedral, investigators have also been at work in the probe to work out what caused the fire, sometimes using ropes to take samples high up in the building.

This phase has now been completed and a months-long process of analysis of all the evidence collected from the site will now begin, a source close to the investigation told AFP.

Several shortcomings in the security of the cathedral were identified — in particular in the alarm system which meant that the alert to firefighters was late — and in the electrical system of one of the elevators.

Some one hundred witnesses were interviewed in the space of a two month period alone.

But while an accident, possibly caused by a short circuit or discarded cigarette butt, remains the likely explanation, the sheer extent of the damage complicates drawing any conclusions.

"The way things stand now, it is not possible to say with certainty that we will one day be able to say what could have caused the fire," warned the source, who asked not to be named.

But even as investigators try and piece together exactly what happened that fateful night, filmmakers are at work on dramatic reconstructions of the events.

Streaming giant Netflix is preparing a six-episode miniseries produced in cooperation with the Paris fire brigade which will look at the impact of the fire on different people across France.

A rival English-language series is also expected based on a major investigation into the fire carried out by the New York Times.

And French director Jean-Jacques Annaud, who made "The Name of the Rose", has also started work on a feature film about the disaster which is expected in 2022 and will intersperse archive footage with drama.

"The main character, the star, is Notre-Dame," he told AFP.

"It's as if I am telling the story of a victim who is dying and the doctors don't come... Thank goodness there is a happy end."