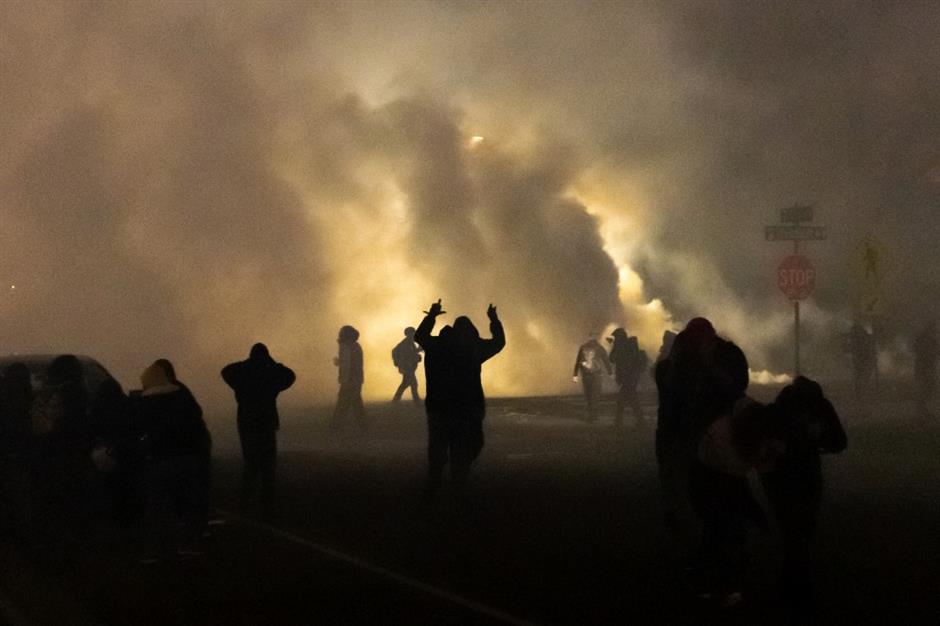 People take cover as police fires tear gas in front of the Brooklyn Center Police Station during a protest after a police officer shot and killed a black man in Brooklyn Center, Minneapolis, Minnesota on April 11, 2021.

Protests broke out Sunday night after US police fatally shot a young Black man in a suburb of Minneapolis — where a former police officer is currently on trial for the murder of George Floyd.

Hundreds of people gathered outside the police station in Brooklyn Center, northwest of Minneapolis. Police fired teargas and flash bangs at the demonstrators, according to an AFP videojournalist at the scene.

The mother of Daunte Wright, a 20-year-old Black man, told a crowd earlier Sunday evening that he called her to say he had been pulled over by police, local media reported.

Katie Wright said she heard officers tell her son to put his phone down, and then one of the officers ended the call. Soon after, her son's girlfriend told her he had been shot.

The Minnesota Bureau of Criminal Apprehension confirmed to AFP it is "investigating an officer-involved shooting incident" in Brooklyn Center but declined to identify the victim.

According to a statement from the Brooklyn Center Police Department, officers pulled over a driver for a traffic violation. When they discovered he had an outstanding warrant, they tried to take him into custody.

He got back into his car, and one of the officers fired their weapon, striking the driver, who died at the scene.

A female passenger in the car suffered "non-life threatening injuries" and was transported to a local hospital, said the statement, which did not identify the woman.

A couple hundred people gathered in Brooklyn Center on Sunday evening, where they were met with police in riot gear.

Photos from the scene showed men stomping on the windshield of a police cruiser. Police fired nonlethal rounds to try to disperse the protesters, according to the Star Tribune.

After about an hour, the police presence eased, and the crowd lit candles and wrote messages such as "Justice for Daunte Wright" in chalk on the street.

"We are asking the protesters to continue to be peaceful and that peaceful protesters are not dealt with force," he wrote on Twitter.

But clashes broke out again soon after as another group of several hundred protesters gathered outside the Brooklyn Center Police Headquarters and were met with teargas and flash bangs.

The shooting comes during the ongoing trial of former police officer Derek Chauvin, who is facing charges of manslaughter and murder over the death of George Floyd in Minneapolis last May.

Floyd's killing sparked months of protests in the United States against racism and police brutality and attracted international outrage.