Japanese Prime Minister Yoshihide Suga said on Tuesday that his government has decided to discharge contaminated radioactive wastewater in Fukushima Prefecture into the sea amid domestic and international opposition.

Suga made the announcement after convening a meeting of relevant ministers to formalize plans to release the radioactive water accumulated at the plant into the Pacific Ocean. 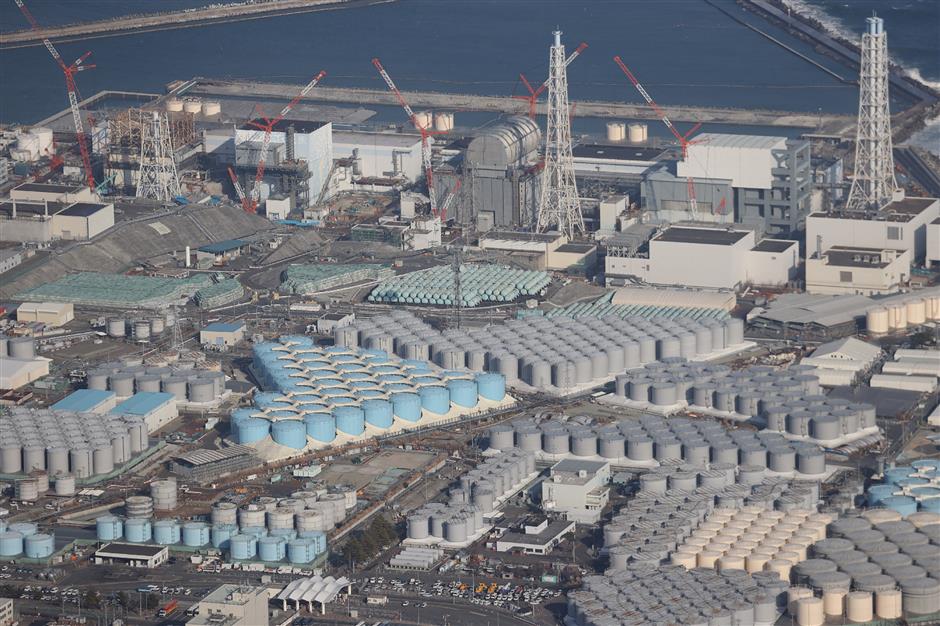 Struck by a magnitude-9.0 earthquake and ensuing tsunami that hit Japan's northeast on March 11, 2011, the No. 1-3 reactors at the Fukushima Daiichi nuclear plant suffered core meltdowns.

The plant has been generating massive amount of radiation-tainted water since the accident happened as it needs water to cool the reactors. The plant's operator Tokyo Electric Power Company Holdings Inc. said it will take around two years for the release to start.

The water has been treated using an advanced liquid processing system to remove most contaminants. However, things like tritium — a radioactive byproduct of nuclear reactors — are hard to filter out.

According to some marine experts, traces of ruthenium, cobalt, strontium, and plutonium isotopes in the wastewater also raise concerns.

The operator claimed that the whole decommissioning process will be hampered if it needs to keep building storage tanks within the plant's premises.

Environmental groups, including Greenpeace, said the government should build more tanks to hold the water outside the plant instead of choosing the cheaper option of ocean release.

Japan had considered evaporating or storing underground the tritium-laced water from the plant as an alternative. However, the Japanese government decided to dilute the contaminated water and discharge it into the sea because it was more technically feasible and would save on costs.

Tritium is light and could reach as far afield as the US west coast within two years, according to Ken Buesseler at Woods Hole Oceanographic Institution in Falmouth, Massachusetts.

A more serious matter lies in potentially more dangerous radionuclide in the water, including strontium-90 and iodine-129. While filtering has reduced their concentrations, around 70 percent of the water has yet to go through a secondary filtering process. "There are major questions as to whether it will work as planned," said Shaun Burnie at Greenpeace.

"Japan already contaminated and did damage to the ocean with the Fukushima power plant accident," Ahn Jae-hun, energy and climate change director at the Korea Federation for Environmental Movements, a green advocacy group in Seoul, told Xinhua over phone.

Citing government data from Japan, Ahn said a far higher level of radioactive isotope has been detected at the fishery products coming from Fukushima Prefecture than other areas in Japan.

"The situation will continue to deteriorate further" as the nuclear wastewater, dumped from Fukushima prefecture, will circle around the entire Pacific Ocean in the long run, the environmentalist noted.

Ahn urged Japan to disclose relevant information to neighboring countries, including China and South Korea, given that Tokyo's opacity fueled uncertainty and anxiety over the contamination.

Calling the irradiated sewage discharge "irresponsible," he warned that once the contaminated water flows into the ocean and the marine ecosystem is destroyed, it can never be restored. 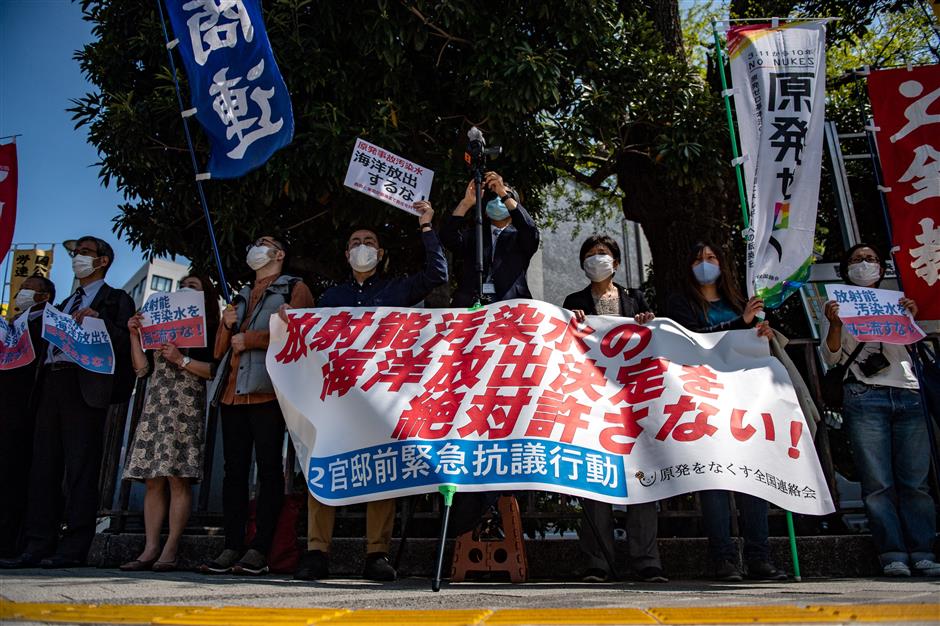 People protest against the Japan government’s plan to release treated water from the stricken Fukushima nuclear plant into the sea outside the prime minister’s office in Tokyo on April 12, 2021.

For a decade, the specter of nuclear contamination has emerged as an invisible obstacle to economic reconstruction in the disaster-stricken areas.

At first, people feared that agricultural products, aquatic products including vegetables and seafood, and even industrial products from the disaster areas were contaminated, which kept consumers away, leading to a further blow to the local economy.

Because of the cleanup efforts of residents in the disaster areas, the indicators of the vast majority of products have been restored to the normal range, yet there are still many people in Japan who are suspicious and distrust the products.

According to a survey conducted by the Department of Fisheries of the Ministry of Agriculture, Forestry and Fisheries at the beginning of the year, only 49 percent of aquatic products processing enterprises in Fukushima and its surrounding five prefectures saw their sales recover to more than 80 percent. Fukushima prefecture remains the slowest among the six affected prefectures to recover, with only 21 percent of sales and 41 percent of production capacity back to their original levels.

At a previous government hearing on the release of nuclear contaminated water into the sea, some representatives said the government's move could undermine efforts to revive the disaster areas.

The release of radioactive water into the sea will not only impact fishermen production and the price of aquatic products, it may also hit the tourism industry of the surrounding areas, the representatives said, adding that the government should introduce specific and clear compensation measures.

Hiroshi Kishi, head of the National Federation of Fisheries Cooperatives, said he once again expressed his "absolute opposition to the discharge of nuclear sewage into the sea" in a recent meeting with Suga and asked the government to take clear measures to solve any subsequent "reputation damage." 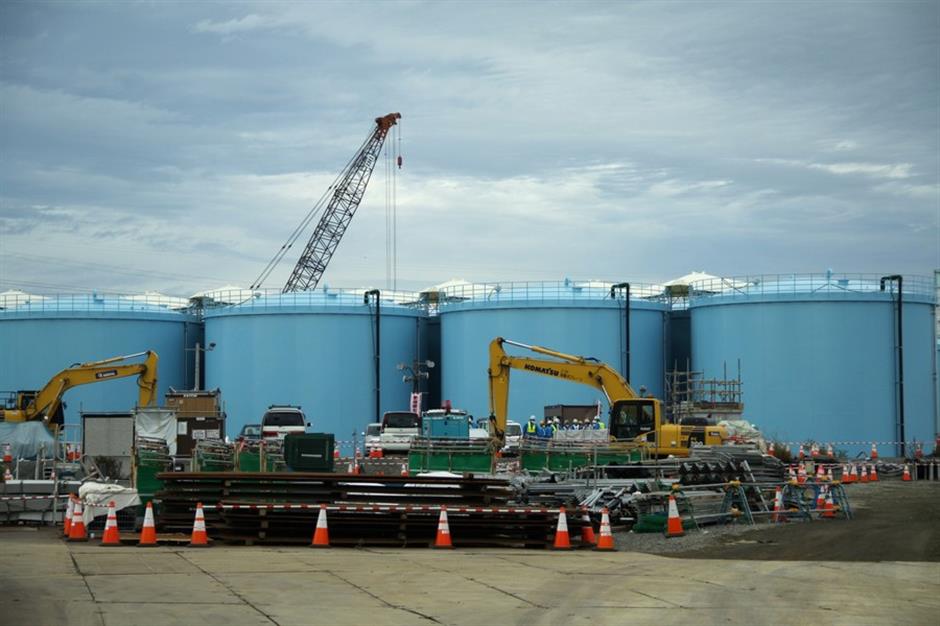 The decision has faced strong opposition from the Japanese fish industry and the public, with fishery industry representatives saying it would undo years of work to restore their reputation.

"We are dead against a release of contaminated water to the ocean as it could have a catastrophic impact on the future of Japan's fishing industry," Kishi told a meeting with government officials last October.

According to Kishi, the release of radioactive water could trigger other countries to tighten restrictions on imports of Japanese fishery products, reversing a recent trend toward policy loosening.

Currently, a number of countries and regions continue to impose restrictions on Japanese agricultural and fishery products as a result of the Fukushima crisis amid continued concerns about produce safety.

Japanese Economy, Trade and Industry Minister Hiroshi Kajiyama said that while addressing the concerns of the fisheries industry, the government hopes to work with the International Atomic Energy Agency and other global organizations while maintaining transparency over the matter.

A poll conducted by Asahi Shimbun newspaper in January showed that 55 percent of respondents are against the government's plan to discharge contaminated radioactive wastewater from Fukushima into the sea, while 32 percent said they support it.

Yukio Edano, the leader of the country's main opposition party, the Constitutional Democratic Party of Japan, strongly condemned the plan on Saturday, saying the government's decision is unacceptable and a complete disregard for the voices of the people of Fukushima.

Some environmental groups including Friends of the Earth Japan and The Citizens' Commission on Nuclear Energy said on Monday they have collected more than 64,000 signatures from 88 countries and regions in a petition to the government.

The environmental groups called the government's decision a "crude way of deciding" without adequate discussion and called for it to be withdrawn.

The plan also raised concerns from neighboring countries about a possible impact on human health and fishery businesses.

China has expressed serious concerns about Japan's decision to discharge contaminated water from the Fukushima nuclear station, with Foreign Ministry spokesperson Zhao Lijian saying that China urged the Japanese side to take a responsible attitude and treat the issue of nuclear waste disposal with caution.

Zhao stressed that proper disposal of nuclear waste is related to international public interests and the vital interests of neighboring countries. It should be handled carefully and properly to avoid further damaging the marine environment, food safety and human health.

Meanwhile, South Korea has also voiced its "grave concerns," with Foreign Ministry spokesman Choi Young-sam saying "it will be difficult to accept if the Japanese side decides to release the contaminated water from the Fukushima nuclear power plant without sufficient consultations."

"Our government expresses grave concerns as the decision can have a direct and indirect impact on the safety of our people and the surrounding environment," he added.