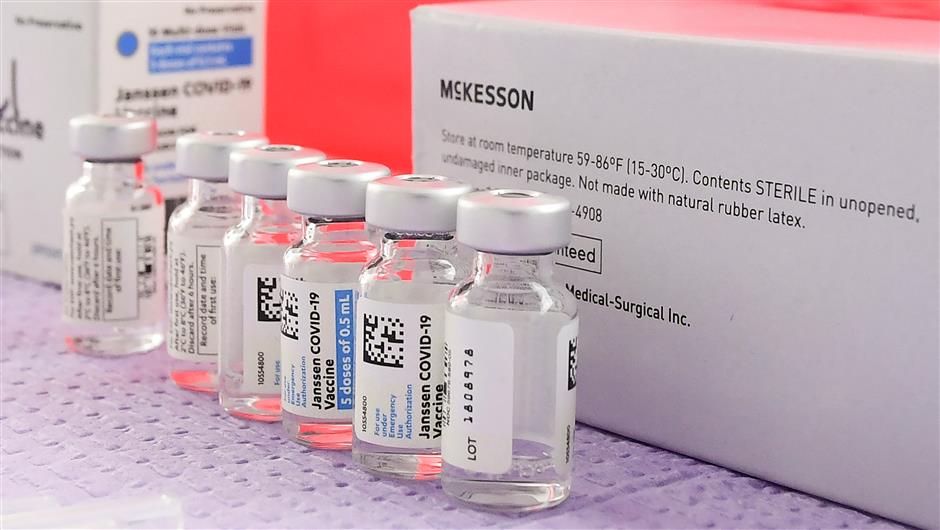 Bottles of the single-dose Johnson & Johnson COVID-19 vaccine await transfer into syringes for administering at a vaccine rollout in Los Angeles, California.

A pause on all US vaccinations with the Johnson & Johnson COVID-19 shot will continue for at least another week after members of a government-convened expert panel said on Wednesday they needed more time to assess its possible links to a clotting disorder.

The Centers for Disease Control and Prevention convened a meeting a day after authorities reported six cases of women developing brain clots along with low blood platelet counts, including one death, within two weeks of people getting the one-dose COVID-19 vaccine.

The shot has been given to some 7.2 million Americans, and participants at the meeting were told on Wednesday a seventh case involving a 28-year-old woman has been identified.

Wednesday's meeting could have decided whether to limit the vaccine to some subsets of the population, but most members said they were not yet comfortable in making that call without more data to study.

"I don't want to send the message that there is something fundamentally wrong with this vaccine," said Beth Bell, chair of the working group.

"But I want to be able to understand and defend the decision that I've made based on a reasonable amount of data," she added.

The next meeting has not yet been set but is expected in another week to 10 days.

Some experts were against continuing the pause, fearing it might disproportionately impact vulnerable groups that are easier to reach through a single-dose vaccine that can be stored in fridges.

But most felt that given the highly serious nature of the clots, which can have devastating neurological consequences even when they do not kill, and given the abundance in the United States of other vaccines that do not have the same safety concern, further study was necessary.

The presentations revealed that of the first six cases identified, all were white females, none had previously known clotting disorders, and one was using estrogen/progesterone, taken to mean oral contraceptive.

The woman who died was 45, and three of the women also had clots outside the brain.

Though the link to the vaccine has yet to be conclusively determined, scientists are now treating the shot as the "probable cause" of the disorder, which has been dubbed "vaccine induced immune thrombocytopenia" or "VIIT."

Ahead of the meeting, CDC director Rochelle Walensky said the symptoms are consistent with rare side effects from the AstraZeneca vaccine seen in Europe.

Both the J&J and AstraZeneca vaccines are based on adenovirus vector technology, which is now under scrutiny.

People who received the J&J vaccine are being urged to report if they experience symptoms including severe headache, abdominal pain, leg pain or shortness of breath.

Doctors meanwhile have been told not to treat such clots with the common thinner heparin.

Four of the initial six cases were treated using heparin, and this might have made their condition worse, according to the leading biological hypothesis for what is driving the effect.

Cases involving clots together with low platelets have not been linked to the Pfizer or Moderna vaccines, which are based on messenger RNA technology.

When the Advisery Committee on Immunization Practices reconvenes, it could potentially vote to recommend that only people beyond a certain age receive the J&J vaccine.

The reasoning is that the older people get, the more they risk developing a serious form of COVID-19, and the more it is in their interest to be vaccinated despite potential side effects.

But US officials have also emphasized that they have more than enough supply lined up of the Moderna and Pfizer vaccines to cover the adult population by the end of July, which could make giving the J&J shot the green light again unnecessary.