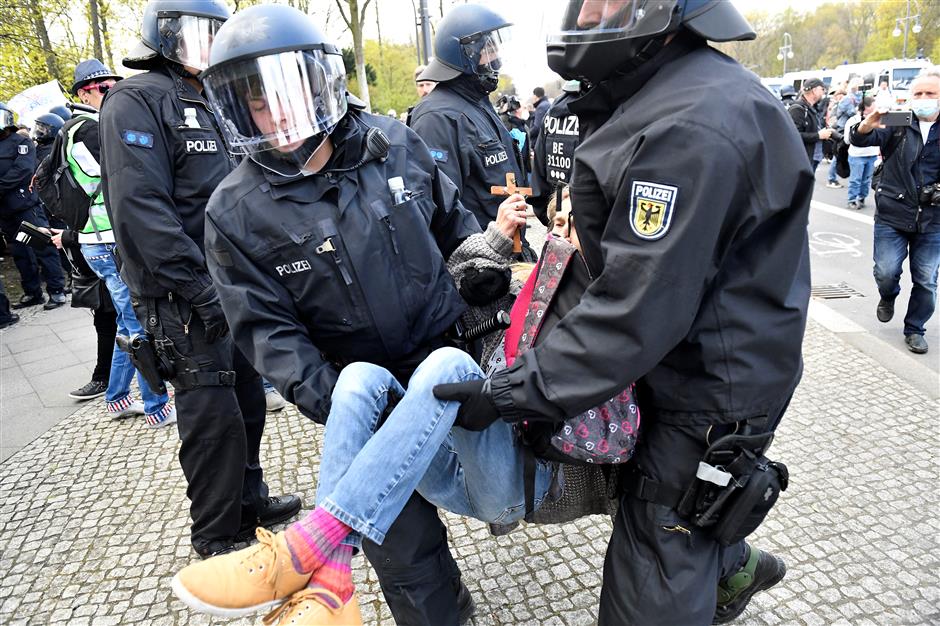 A protester holding a crucifix is carried away by policemen during a demonstration in Berlin on Wednesday against restrictions by the German government to limit the spread of COVID-19.

Police clashed with protesters in Berlin on Wednesday as they tried to disperse a rally against the coronavirus lockdown, while parliament debated a law to give the national government more powers to fight a third wave of the pandemic.

Chancellor Angela Merkel drew up the law after some of Germany’s 16 federal states refused to impose tough measures despite a surge in cases.

Her government has come under fire for what critics say is its chaotic handling of lockdowns, and a slow vaccination campaign.

Police said on Twitter they would break up the protest because many in the crowds of demonstrators were not wearing face masks or keeping a distance from one another.

Up to 2,200 officers were on duty in Berlin to manage the protests.

Seven people were detained after they attacked officers, while police had to use pepper spray against other demonstrators who threw bottles and tried to climb over barriers.

“Peace, freedom, no dictatorship!” some protesters chanted, many waving German flags and banners which said the lockdown undermines values enshrined in the constitution.

Germans are sensitive to any measures which threaten their freedom due to the country’s Nazi past, and demonstrations against the legislation have been staged in the last few weeks in towns across the country.

The new law enables the national government to impose curfews, as well as limits on private gatherings, sport and shop openings. Schools will close and return to online lessons if infections exceed 165 cases per 100,000 residents.

Alexander Gauland, parliamentary head of the far-right Alternative for Germany party, said the government was fighting the pandemic with the wrong measures.

“They are stuck in their trenches,” he told the Bundestag.

Ralph Brinkhaus, parliamentary leader of Merkel’s Christian Democrats, said politicians had to balance civil liberties with saving lives. “We are in a situation where too many people are dying,” he said.

Germany reported a 24,884 new infections yesterday bringing the total to nearly 3.19 million. About 80,634 people have died.