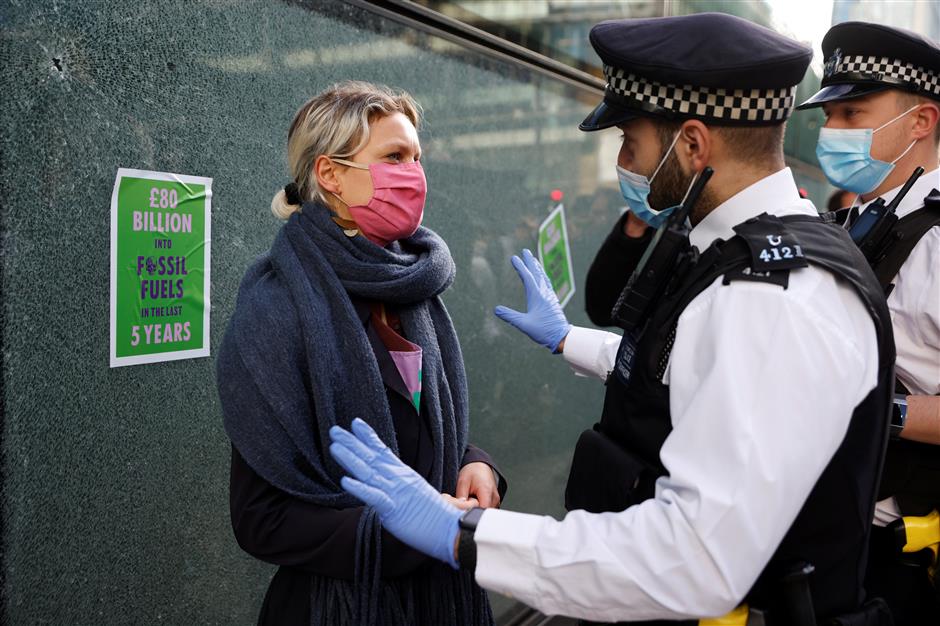 Police detain an activist from Extinction Rebellion, a global environmental movement, during a protest outside HSBC headquarters in Canary Wharf in London on Thursday.

Climate activists shattered 19 windows at HSBC’s headquarters in London’s Canary Wharf on Thursday as part of a protest against the financing of what the group says is devastating climate change that threatens the planet.

The female activists from the Extinction Rebellion group used hammers to break the windows and pasted stickers on them before sitting down to wait for the police to arrest them.

“Despite HSBC’s pledge to shrink its carbon footprint to net zero by 2050, its current climate plan still allows the bank to finance coal power, and provides no basis to turn away clients or cancel contracts based on links to the fossil fuel industry,” Extinction Rebellion said in a statement.

A spokesperson for HSBC said the bank welcomed meaningful dialog on its climate strategy but that it could not “condone vandalism or actions that put people and property at risk.”

The bank said it aimed to achieve net zero carbon emissions by 2030 and to phase out the financing of coal-fired power and thermal coal mining by 2040 globally.

“We have an ambition to be net zero by 2030 and to bring our financed emissions to net zero by 2050,” the HSBC spokesperson said.

Extinction Rebellion wants to prompt a wider revolt against the political, economic and social structures of the modern world to avert the worst scenarios of devastation outlined by climate change scientists.

The group, which brought parts of London to a standstill in 2019, broke windows at the headquarters of Barclays two weeks ago as it focuses on the finance sector.