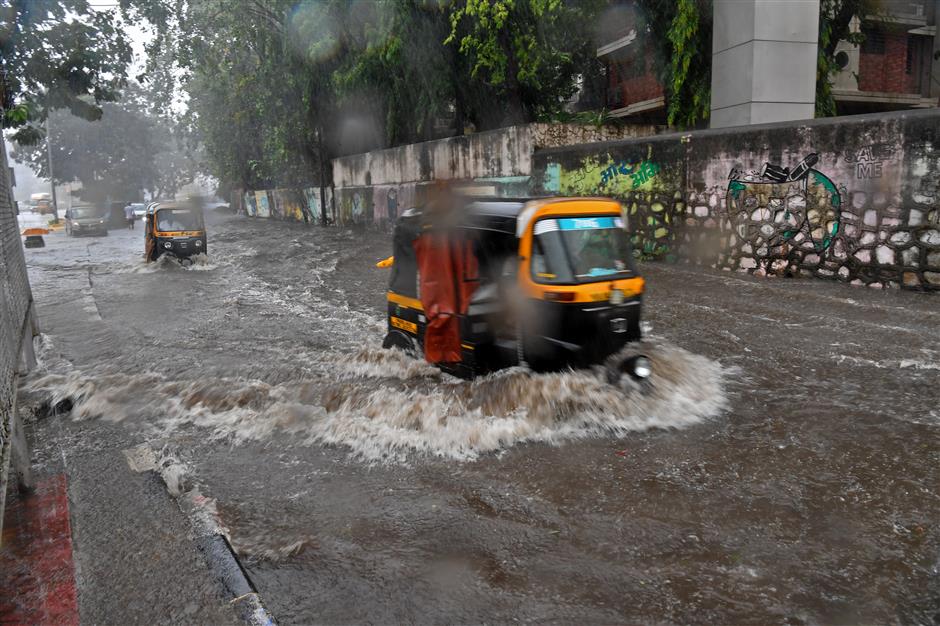 Auto rickshaws wade through a flooded street amid heavy rains caused by Cyclone Tauktae in Mumbai, India, on Monday. The cyclone was to make landfall in western Gujarat state.

A major cyclone packing ferocious winds and threatening a destructive storm surge bore down on India on Monday, disrupting the country’s response to its devastating COVID-19 outbreak.

At least six people died over the weekend in torrential rains and winds as Cyclone Tauktae, according to press reports the biggest to hit western India in 30 years, swept over the Arabian Sea with Gujarat state in its sights.

The “Extremely Severe Cyclonic Storm” was due to make landfall yesterday between 8pm and 11pm with winds of 155-165 kilometers per hour gusting up to 185 kph, the Indian Meteorological Department said.

It warned of storm surges of up to 3 meters high in some of Gujarat’s coastal districts.

The colossal swirling system visible from space exacerbated India’s dire problems dealing with a huge coronavirus surge that is killing at least 4,000 people every day and pushing hospitals to breaking point.

In waterlogged and windswept Mumbai, where authorities yesterday closed the airport for several hours and urged people to stay indoors, authorities on Sunday shifted 580 COVID-19 patients “to safer locations” from three field hospitals.

In Gujarat, where on Sunday and overnight more than 100,000 people from 17 districts were evacuated, all COVID-19 patients in hospitals within 5km of the coast were also moved.

Authorities there were scrambling to ensure there would be no power cuts in the nearly 400 designated COVID-19 hospitals and 41 oxygen plants in 12 coastal districts where the cyclone was set to hit hardest.

“To ensure that COVID-19 hospitals are not faced with power outages, 1,383 power back-ups have been installed,” senior local official Pankaj Kumar said.

“Thirty-five ‘green corridors’ have also been made for supply of oxygen to these hospitals.”

Virus safety protocols such as wearing masks, social distancing and the use of sanitizers would be observed in the shelters for evacuees, officials added.

The state also suspended vaccinations for two days. Mumbai did the same for one day.

Thousands of disaster response personnel had been deployed, while units from the coast guard, navy, army and air force had been placed on standby.