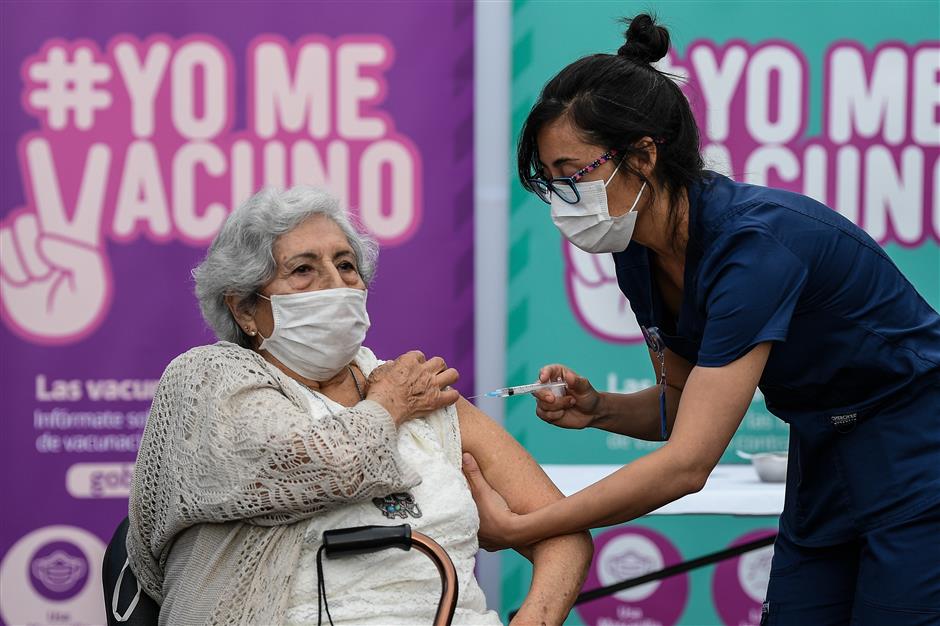 A health care worker administers a dose of the Sinovac's CoronaVac vaccine to a woman at a vaccination center in Santiagon Santiago, Chile, on February 4, 2021.

"With at least four months of follow-up, we have super reliable and positive numbers," said Dr. Rafael Araos, an adviser to the Undersecretariat of Public Health, adding that data obtained over the period are "consistent."

Despite the COVID-19 variants in circulation, "the vaccine is performing adequately," he told reporters at a press conference.

The latest information updates the results of a previous study, titled "Effectiveness of the inactivated CoronaVac vaccine against SARS-CoV-2 in Chile," which Araos presented on April 16, and follows the monitoring of another 10.2 million people up to May 1.

The vaccine's efficacy in preventing hospitalization rose to 87 percent; in preventing admission to an intensive care unit, to 90.3 percent; and in preventing deaths caused by COVID-19, to 86 percent, according to Araos.

Also present was Chilean Deputy Minister of Public Health, Paula Daza, who stressed "the importance of all of us getting vaccinated. The vaccines that we have in the country are effective and we have seen it with the results in how symptomatic cases, hospitalizations, admissions to intensive care units and deaths decline."

Daza urged those under 50 years of age to get vaccinated when their turns come, noting that the rate of immunization is lower among younger people.

"We must reach 80 percent of the target population in each age group," she said, referring to the government's goal of immunizing 15 million people, about 80 percent of Chile's population, to achieve so-called herd immunity.