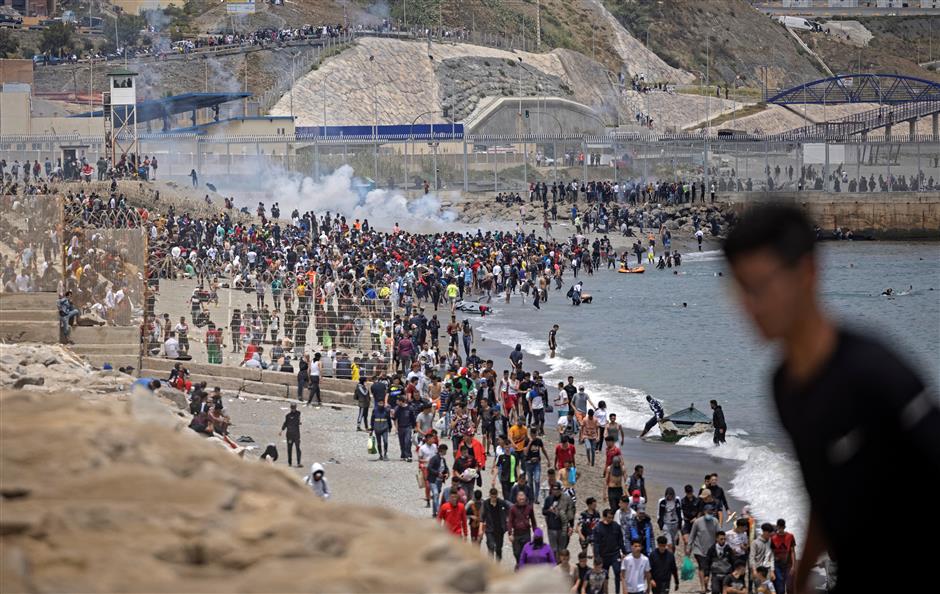 Spanish police try to disperse migrants at the border between Morocco and the Spanish enclave of Ceuta on Tuesday.

A steady stream of migrants tried to swim to the Spanish enclave of Ceuta on Wednesday, after a record influx of arrivals sent diplomatic tensions soaring between Madrid and Rabat.

A European commissioner vowed that the continent would not be “intimidated” after about 8,000 migrants rushed into Ceuta since Monday.

Spanish Prime Minister Pedro Sanchez pledged to “restore order” after the unprecedented surge, and said yesterday that some 4,800 migrants had been sent back.

The influx comes against the backdrop of soaring tensions with Morocco over Madrid’s decision to provide medical treatment for the leader of the Western Sahara independence movement, Polisario Front, who has been seriously ill with COVID-19.

It has revived the thorny issue of migration into the European Union, with the Vice President of the European Commission, Margaritis Schinas, saying yesterday the continent “won’t be intimidated by anyone.”

Speaking on Spanish radio, he said there have been “a few attempts by third countries ... over the past 15 months” to leverage the migrant issue. In a veiled reference to Rabat, he said Europe would “not be a victim of these tactics.”

“Ceuta is Europe, this border is a European border and what happens there is not a problem for Madrid, but a problem for all” Europeans, he said. “No one can intimidate or blackmail the European Union. We cannot tolerate this.”

On the ground, people continued to gather on the border yesterday.

As the sun rose, a handful of people were swimming to reach the Spanish side, their slow progress carefully watched by dozens of soldiers deployed along the beach with riot shields and batons.

It was not clear how many managed to cross, but those who made it to shore were immediately picked up by soldiers and escorted to where medics were offering help, although few appeared to need it.

No one appeared to be hurt, but some seemed exhausted by the effort. They were then frogmarched back to the border fence where they were sent home.

Although the distance between African territory and Europe technically involves a swim of barely 200 meters, many tried to push beyond the nearest beach to avoid the waiting troops.

“Viva Espana” yelled one repeatedly, before starting to call for help in increasingly panicked tones to a nearby rescue boat.

Analysts said it was clear Morocco had turned a blind eye to the human tide surging into Ceuta to put diplomatic pressure on Spain to recognize its sovereignty over Western Sahara.

Most of the migrants had crossed into Ceuta largely unimpeded by Moroccan security forces on Monday, but by Tuesday morning, Rabat had deployed reinforcements at the Fnideq border crossing who fired tear gas to disperse those trying to slip across.

The crisis comes after Madrid allowed Polisario Front leader Brahim Ghali to fly to northern Spain in mid-April to be treated for COVID-19, angering Rabat.

The Polisario Front has fought for the independence of Western Sahara, a former Spanish colony mainly under Moroccan control.

The Moroccan authorities have long wanted Spain to acknowledge their authority over Western Sahara.