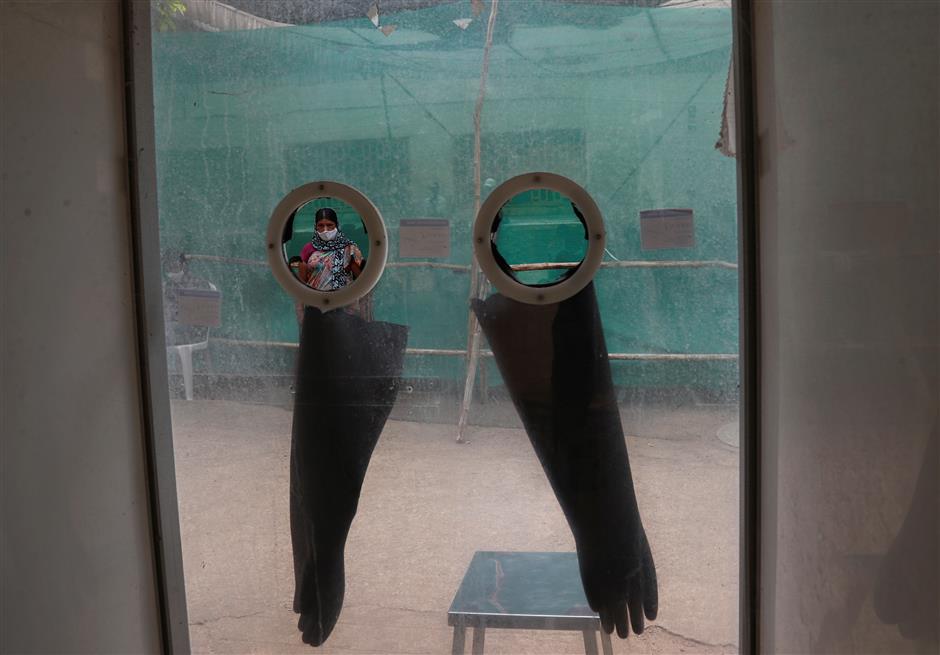 An Indian woman waits for the result of her COVID-19 test at a hospital in Hyderabad, India, on April 12, 2021.

Nearly two-thirds of people tested in India have shown exposure to the coronavirus, a chain of private laboratories said on Wednesday, indicating a runaway spread of the virus as the daily death toll rose to a record 4,529.

For months, nowhere in the world has been hit harder than India by the pandemic, as a new variant discovered there fueled a surge of up to more than 400,000 new infections a day.

Only the United States has had more cases, or a worse single day death toll, when 5,444 people died on February 12.

But even with a downturn in the number of new cases in India over the past few days, if not in deaths, experts said there was no certainty that infections had peaked.

It is widely accepted that the official figures grossly underestimate the real impact, with some experts saying infections and deaths could be five to 10 times higher.

There are fears the new, highly infectious variant is out of control and many cases are going unreported because of lack of testing, particularly in the vast countryside.

Data from Thyrocare, a chain of private laboratories, appeared to back up those fears, showing that 63.5 percent of people tested positive for COVID-19 antibodies on average over the past seven days, up from 45 percent a month ago.

The data from 25 states included individuals who were infected in the past, vaccinated, uninfected and those who had not been vaccinated, the company’s Chief Executive Arokiaswamy Velumani said on Twitter.

But that still falls short of India’s claimed daily testing capacity of 3.3 million, said Rijo M. John, a professor at the Rajagiri College of Social Sciences in the southern city of Kochi.

India performed 224 tests for every 1,000 of its population in a single day this month, according to estimates by research firm GlobalData compared with 1,307 tests per 1,000 of population in the US on the same day.

“Many of these tests are being deployed in urban centers, where cases may have peaked and so it doesn’t serve much purpose,” added John.

“It’s time they were diverted to more rural areas, but I doubt that is being done.”

Prime Minister Narendra Modi’s popularity has fallen to 63 percent, its lowest since US data intelligence firm Morning Consult began tracking it in 2019, amid criticism of his government’s handling of the pandemic.

Hospitals have had to turn patients away while mortuaries and crematoriums have been unable to cope with bodies piling up.

Photographs and television images of funeral pyres burning in parking lots and corpses washing up on the banks of the Ganges River have fueled impatience with the government’s handling of the crisis.

But criticism has also mounted over a slow vaccination campaign, plagued by a lack of supplies.