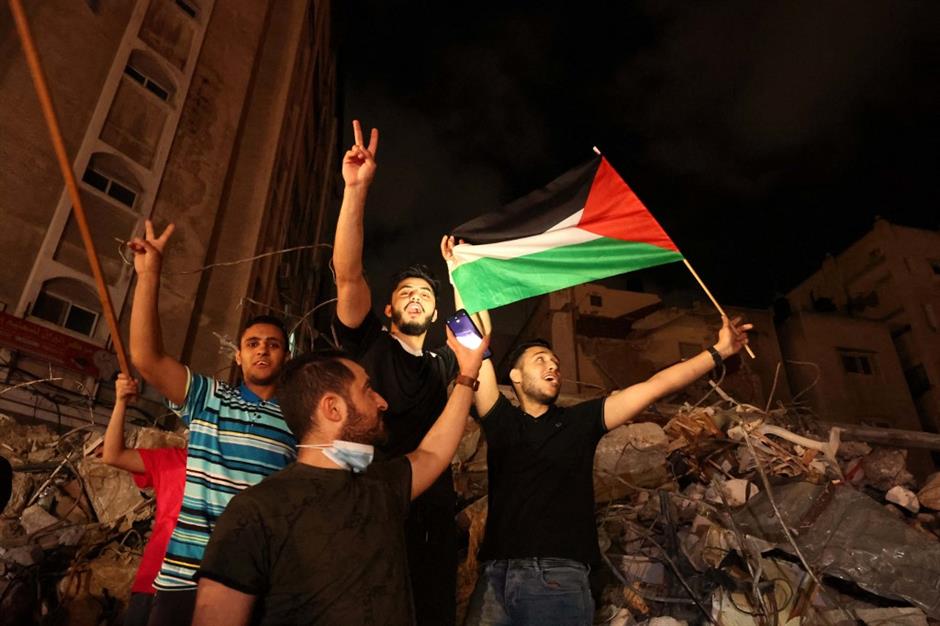 Men wave the Palestinian flag as they celebrate the ceasefire brokered by Egypt between Israel and the two main Palestinian armed groups in Gaza on May 20, 2021.

Both Israel and Hamas, which rules the Gaza Strip, have accepted an Egyptian-brokered deal to cease fighting at 2am on Friday local time (11pm GMT) to end the 11-day bloodshed.

The decision came after a 2.5-hour discussion and was "unanimously" approved by the ministers, according to the office's statement.

"The political echelon emphasizes that the reality on the ground will determine the continuation of the military campaign," the statement noted.

Hamas politburo chief Ismail Haniyeh was informed of the timing of the truce by Egypt, Hamas spokesman in Gaza Hazem Qassem said.

The Egyptian mediator informed Hamas that Israel had agreed to a mutual ceasefire, "and therefore we also agreed to the ceasefire," a Hamas source told Xinhua on condition of anonymity.

"We have obtained guarantees from the mediators that the aggression on Gaza will stop," Hamas leader in Lebanon Osama Hamdan told the news website Al Resala.

Taher al-Nouno, the media adviser of Haniyeh in Gaza, said the Palestinian armed resistance will be committed to the agreement as long as the Israeli side is.

Israel has been launching massive raids on the Palestinian enclave with airstrikes, artillery shellings and drone attacks since May 10, in response to the rockets fired by Palestinian militants in Gaza to retaliate for Israel's violation of the sacred Islamic holy site of Al-Aqsa Mosque in Jerusalem.

This is the heaviest fighting between Israel and Gaza militants since 2014, which has so far killed 232 Palestinians, including 65 children and 39 women, and 12 Israelis.

Egypt, which has been leading the international mediation to end the Israeli-Palestinian bloodshed, will send two security delegations to Israel and Palestine to ensure the implementation of the truce, Egypt's official MENA news agency reported on Thursday.