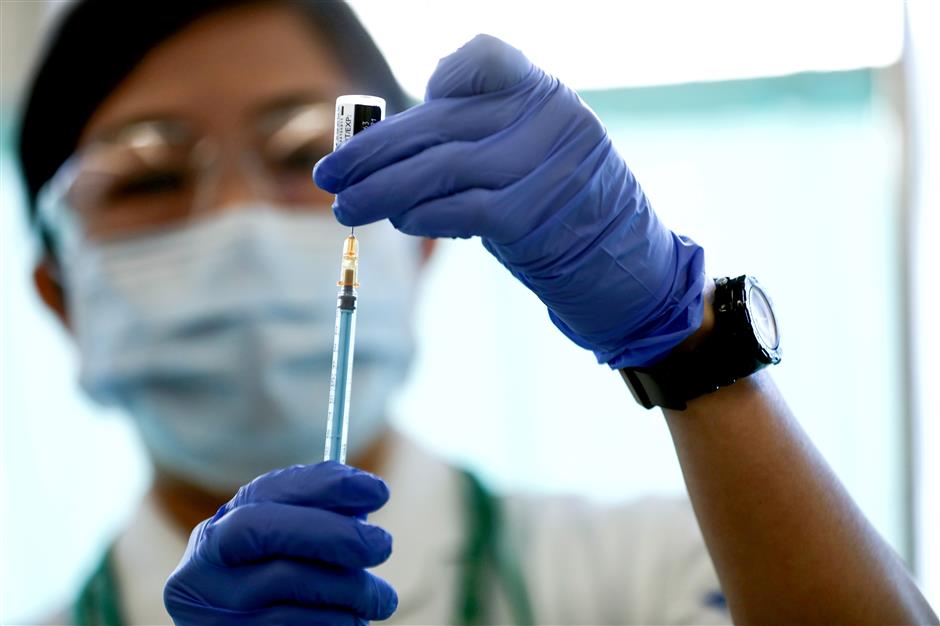 A medical worker fills a syringe with a dose of the Pfizer-BioNTech coronavirus disease vaccine at Tokyo Medical Center in Tokyo, Japan on February 17, 2021.

Japan is expected to expand a state of emergency to cover the island of Okinawa on Friday, and it is also set to approve Moderna Inc and AstraZeneca Plc COVID-19 vaccines after health regulators' green light a day earlier.

Japan kicked off its vaccination campaign in mid-February using Pfizer Inc's vaccine but has so far inoculated just 3.9 percent of its population — the slowest rate among the world's larger, rich countries.

Media reported on Friday that despite the expected approval of the two additional vaccines, the government was likely to wait on using AstraZeneca's shots for the time being due to concerns over blood clots. Japan has arranged to buy 120 million doses of the British-Swedish drugmaker's vaccine, enough for 60 million people.

In contrast to some other Group of Seven countries that are beginning to end coronavirus-led lockdowns, much of Japan remains under emergency curbs amid a fourth wave of the pandemic.

On Friday, medical experts approved the government's proposal to add the southern prefecture of Okinawa to the emergency state, which now covers nine prefectures including Tokyo, host of the Olympic Games starting in about two months.

The state of emergency for Okinawa, expected to be formalized later on Friday, would run for about a month from Sunday through June 20, Economy Minister Yasutoshi Nishimura said, beyond the May 31 for the other nine. It would mark the third straight week that Japan has expanded the state of emergency.

Japan has so far recorded about 695,000 coronavirus infections and 12,000 COVID-19 deaths — much fewer than many countries — but its medical system is increasingly strained by a spike in more infectious variants of the virus.

With the Olympics starting on July 23, Tokyo is under particular pressure to bring infections and strain on the medical system down from the most dire "Stage Four" level and emerge from a state of emergency as scheduled this month.