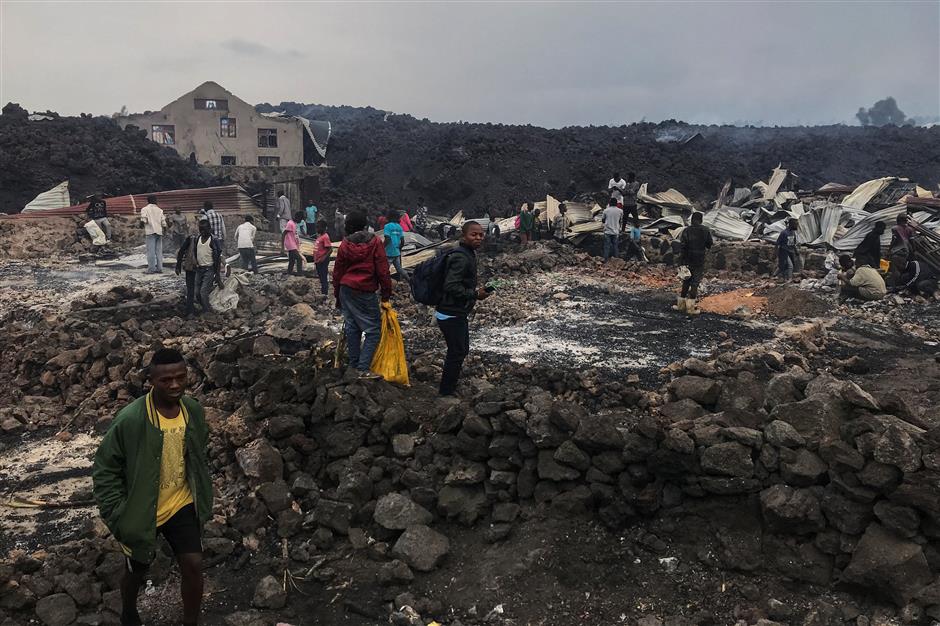 Residents stand next to destroyed structures near smouldering ashes early morning in Goma in the East of the Democratic Republic of Congo on Sunday following the eruption of Mount Nyiragongo.

Congo's Mount Nyiragongo unleashed lava that destroyed homes on the outskirts of Goma on Sunday, but witnesses said that the city of 2 million had been mostly spared after the volcano erupted at night and sent thousands fleeing in panic.

Residents said there was little warning before the dark sky turned a fiery red, leading to fears that the eruption could cause the same kind of devastation as the last time in 2002 when hundreds died. There was no official word on how many may have been killed amid the scramble to flee the city late on Saturday.

The United Nations peacekeeping mission had said that it didn't appear the lava was flowing toward Goma based on reconnaissance flights, but untold thousands still set off in search of safety.

Some boarded boats onto Lake Kivu while others attempted to reach Mount Goma, the highest elevation point. At least 3,000 fled across the nearby border into Rwanda.

Yesterday, residents ventured out to assess the damage after a night of panic. Smoke rose from smoldering heaps of lava in the Buhene area near the city.

"We have seen the loss of almost an entire neighborhood," said Innocent Bahala Shamavu. "All the houses in Buhene neighborhood were burned and that's why we are asking all the provincial authorities and authorities at the national level as well as all the partners, all the people of good faith in the world, to come to the aid of this population."

Elsewhere witnesses said lava had engulfed one highway connecting Goma with the city of Beni. Yet, the airport appeared to be spared the same fate as 2002 when lava flowed onto the runways.

Goma is a regional hub for many humanitarian agencies in the region.