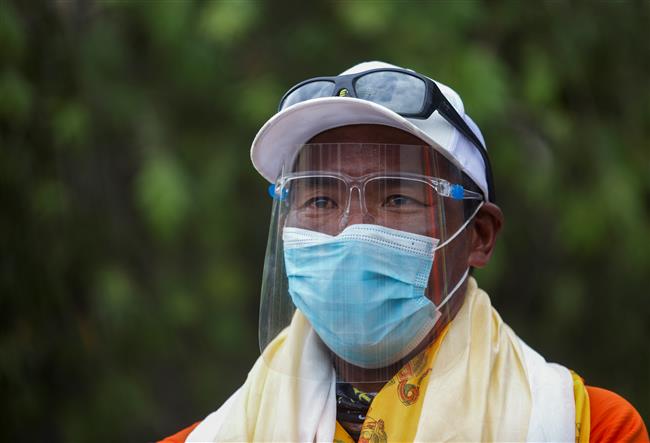 A record-holding Sherpa halted his attempt to scale Mount Everest for a 26th time because of a bad dream but plans to try again next year.

Kami Rita already reached the summit of the world's highest mountain for a record 25th time earlier this month but stopped his most recent climb more than halfway to the top.

"I was making attempt and had reached up to Camp Three but the weather turned bad and I had a really bad dream," Rita said on return to Kathmandu on a helicopter from the mountain on Tuesday.

"The gods were telling me not to go and because I really believe in God, I decided to return," he said but would not elaborate on the dream.

Sherpas believe Everest to be a goddess and have a religious ceremony before stepping on the mountain to make their climbs.

Rita said he would certainly return next year to try to scale the peak a 26th time.

His wife, a few of his friends and government officials greeted him at the Kathmandu airport, but there was no celebratory parade like in the past because the capital is under lockdown due to spiking cases of coronavirus.

Rita and 11 other Sherpa guides reached the summit on May 7 and fixed ropes that enabled hundreds of other climbers to use the icy route to the top.

He did not comment about the current virus situation on Everest after a prominent Austrian outfitter over the weekend said at least 100 climbers and support staff on the mountain were infected.

Nepali mountaineering officials have denied there were any active cases at the base camps for climbing the country's Himalayan mountains.

Foreign guide Lukas Furtenbach halted his Everest expedition due to virus fears and said the outbreak was obvious because he could see sick people at base camp and hear them coughing in their tents.

A total of 408 foreign climbers were issued permits to climb Everest this season from the Nepali side, aided by several hundred Sherpas.

Rita, 51, first scaled Everest in 1994 and has been making the trip nearly every year since then. He is one of many Sherpas whose expertise and skills are vital to the safety and success of the foreign climbers who head to Nepal each year.