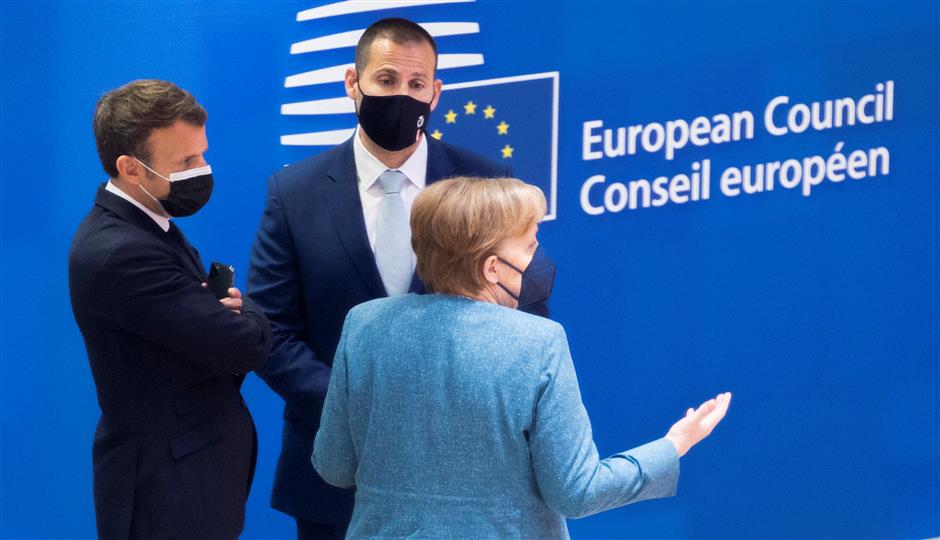 French President Emmanuel Macron speaks with German Chancellor Angela Merkel and Malta's Prime Minister Robert Abela during the second day of the EU summit at the European Council building in Brussels on Tuesday.

European Union leaders on Tuesday welcomed the introduction of a bloc-wide COVID-19 pass that they hope will unlock a tourist surge this summer.

The 27 member states would like the EU Digital COVID Certificate, to be launched July 1 for citizens and residents, to turn the page on coronavirus restrictions that have crimped Europeans' cherished freedom of movement.

Coupled with a separate plan to let in fully vaccinated travelers from countries outside the EU, Europe believes its vital tourist industry could claw back some of the losses racked up since the start of the pandemic.

European Commission chief Ursula von der Leyen stressed that the union had made "steady progress on vaccination" – permitting the reopening of travel.

She said 46 percent of the EU's adult population have received at least one dose of a COVID-19 vaccine, tweeting that 300 million doses would have been delivered by the end of this month. The goal is to fully vaccinate 75 percent of adults by late July.

An agreement reached with the European Parliament last week on the EU legislation for the digital COVID certificate "is important for tourism countries like Austria, because many of our jobs depend on tourism," Austrian Chancellor Sebastian Kurz said as he went into the summit.

The leaders of Greece, Spain and Croatia, whose economies strongly rely on tourist spending, were equally effusive.

The certificate will show the bearer's vaccination status, or whether they have immunity from a COVID-19 infection they have recovered from, or the result of a virus test.