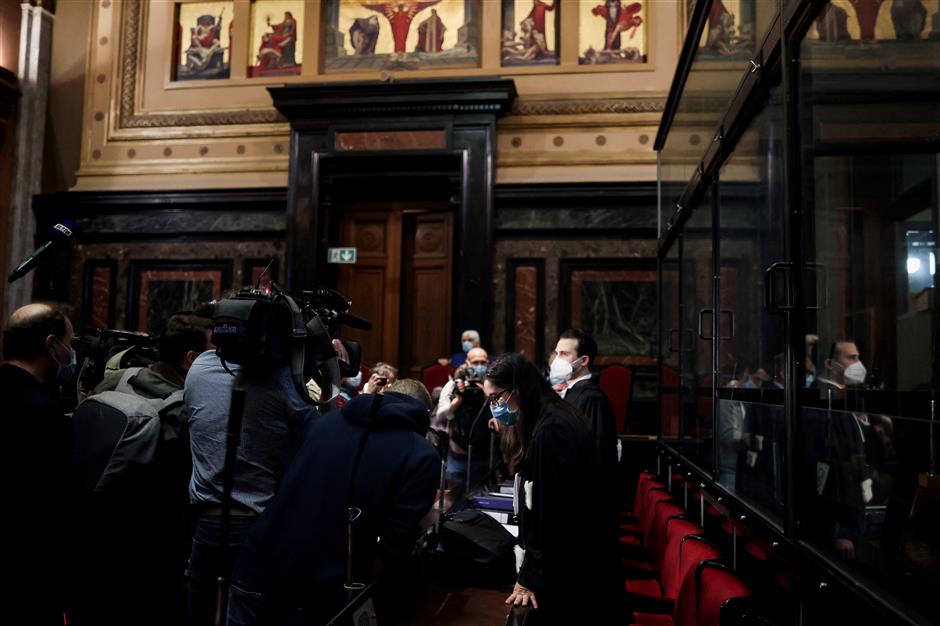 Lawyers of the pharmaceutical company Astra Zeneca answers journalists' questions prior the start of the hearing concerning the legal action by the European Commission against the firm at Brussels' Courthouse on Wednesday.

The European Union accused AstraZeneca of a "flagrant violation" of its contract to rapidly build up coronavirus production capacity in the bloc, as it began legal action against the drugs giant on Wednesday.

The EU member states and their executive, the European Commission, brought the case before a court in Brussels, the union having signed its supply agreement with the British and Swedish firm under Belgian law.

The EU is suing the group in a bid to force it to deliver 90 million more doses of its COVID-19 vaccine before July – arguing that it failed in its contractual duty by handing over only a quarter of the doses it promised for the first quarter of 2021.

The deadline for the contract was set for mid-June, according to the commission, and the EU says the company will face financial penalties if it does not meet this deadline.

AstraZeneca delivered only 30 million doses in the first quarter out of the 120 million it was contracted to supply. For the current quarter which ends June 30, it plans to deliver only 70 million of the 180 million initially promised.

A commission official close to the case said this month that AstraZeneca was delivering doses at a rate of only 10 million per month, well below the planned pace.

The company's defense – articulated ahead of the case in a series of media interviews by AstraZeneca's boss Pascal Soriot – has been that the contract only stipulates that it make "best reasonable efforts" and that production was hit by unavoidable delays.

But, opening the attack for the EU, lawyer Rafael Jeffareli argued that the firm had privileged supplies to Britain and beyond, while failing to make the best effort to step up production at its EU site in the Netherlands, operated by its sub-contractor Halix.

In court, Jeffareli alleged that for several weeks after the EU signed its contract with the firm in September last year, the Dutch plant had continued to supply markets other than the EU.

"Best effort means flexibility! Why did the switchover of the Halix site (to EU supply) only start on October 13?" he demanded.

"AstraZeneca did not even use all the tools at its disposal," he said, claiming that the group could at the time mobilize "six production sites to meet the set schedule."

The Halix plant in Leiden, the Netherlands, had sent supplies to Japan at the end of last year, he said.

In total, "50 million doses were diverted to third countries in flagrant violation of the contract."

The group denies having failed in its obligations and at the end of April denounced the lawsuit as "unfounded."

One lawyer for AstraZeneca – which worked with Oxford University in the development of its vaccine – has claimed that the EU had been warned "as early as February" of the delays and expressed surprise that the bloc had waited at least two months to take the matter to court.

But the European Commission says the contract proves AstraZeneca is legally responsible.

EU diplomats and lawmakers have pointed out that the company has largely delivered promised doses to Britain, where it is headquartered.