Earth's shadow crept across the moon Wednesday night as people across the Pacific Rim waited for a cosmic event known as a super blood moon.

As the eclipse deepened, it appeared as though half the moon had vanished. The other half looked fuzzy in the center with a bright outer edge, the last remnants of the glittering orb that had earlier risen above the horizon.

A super blood moon is when a full lunar eclipse coincides with a supermoon, which is when the moon is particularly close to Earth and appears brighter than normal.

For about 15 minutes, as the moon moves fully into Earth's shadow, the moon darkened, turning a smudgy burnt orange color for many viewers.

"It's our turn," said John Rowe, an educator at the Stardome Observatory & Planetarium in Auckland, New Zealand.

"We are in a prime position for it. The moon is really high in the sky for us, and everyone should be able to see it."

New Zealand, Australia and some other places in the Pacific and East Asia will see the show before midnight, while night owls in Hawaii and the western part of North America will be able to see it in the early morning hours.

Sky gazers along the US East Coast will be out of luck because the moon will be setting and the sun rising. Europe, Africa and western Asia will miss everything. 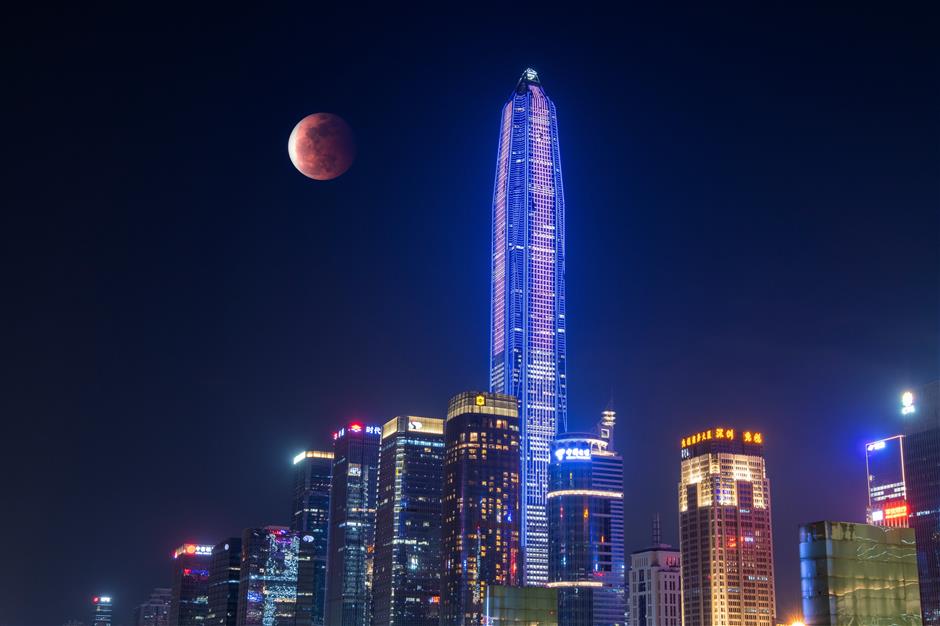 In Hong Kong, Dickson Fu left work early to watch the eclipse from a seaside promenade in the Sai Kung neighborhood.

Fu, who is president of Hong Kong's Sky Observers' Association, picked that particular spot because it would give him an unobstructed view of the eclipse.

"In recent years I'm more interested in taking photos, and in the past few days I have already done rehearsals, testing out equipment such as the camera and lenses for the eclipse tonight," said Fu, who has been observing eclipses since his high school years in the 1990s.

For those living in places where the eclipse isn't visible, there will be livestreams available. And everyone around the world will be able to soak in the brighter-than-usual moon, weather permitting.

It's the first total lunar eclipse in more than two years. While the total eclipse will be just 15 minutes, the entire show will last five hours, as Earth's shadow gradually covers the moon, then starts to ebb. The color is the result of the sunrises and sunsets in Earth's atmosphere projected onto the surface of the eclipsed moon.

The moon will be more than 357,460 kilometers away at its fullest. It's this proximity, combined with a full moon, that qualifies it as a supermoon, making it appear slightly bigger and more brilliant in the sky.