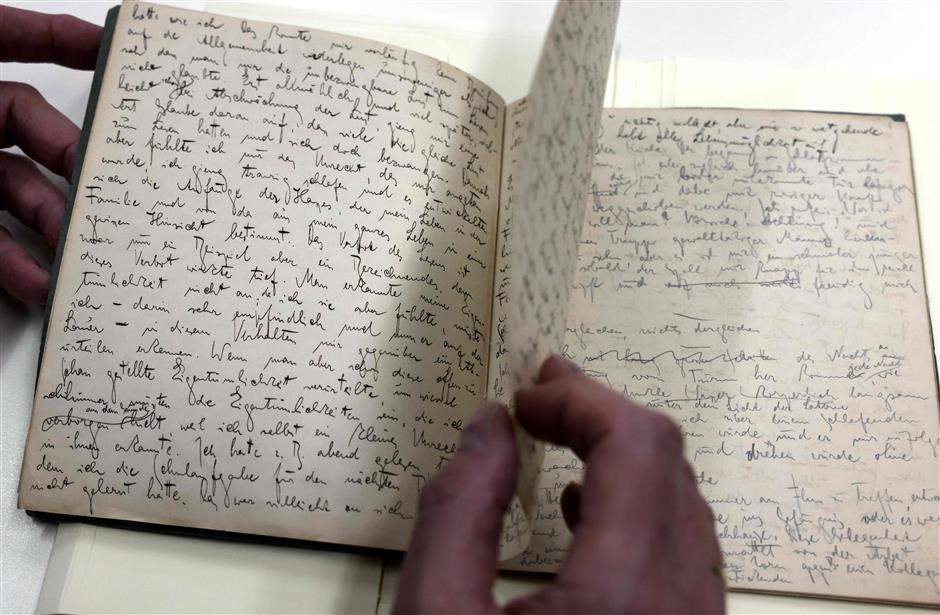 Original manuscripts written in German by Franz Kafka on display at the National Library of Israel in Jerusalem on Monday.

An unpublished collection of letters, manuscripts and drawings by Franz Kafka are now available online via the Israel National Library, which recovered the documents after years of legal wrangling.

Some 120 drawings and more than 200 letters to his friend Max Brod are among the archives now available for public viewing, said the project's curator Stefan Litte.

The documents exist thanks to Brod's decision to break a pact with his friend Kafka, the acclaimed Czech Jewish author of "The Trial" and "The Metamorphosis," who as he suffered from tuberculosis asked his writings be destroyed.

But after the author died in 1924, Brod decided to keep the papers and in 1939 fled Nazi-occupied Czechoslovakia for Tel Aviv with them.

Prague-born Brod, also Jewish, published many of the works, playing a pivotal role in establishing Kafka as one of the 20th century's key literary figures.

Following Brod's death in 1968, a multi-country legal soap opera – some might even call it "Kafkaesque" – entangled rights holders and academics for years.

After years of court proceedings and searches, the fifth and final cache was located in a vault at the Zurich headquarters of UBS bank.

Most of the recovered material had already been published by Brod, but two surprises were in store for archivists in Jerusalem.

"We discovered unpublished drawings, neither signed nor dated, but that Brod had kept," said Litt, who showed drawings of characters on small pieces of paper, including drawings of Kafka's mother and a self-portrait.

"The big surprise we received when we opened these documents was his blue notebook, in which Kafka wrote in Hebrew, signing 'K,' his usual signature."

In one entry, dated to 1920, he asks a teacher in Hebrew not to get angry for mistakes in his homework – "because I am already angry for both of us."