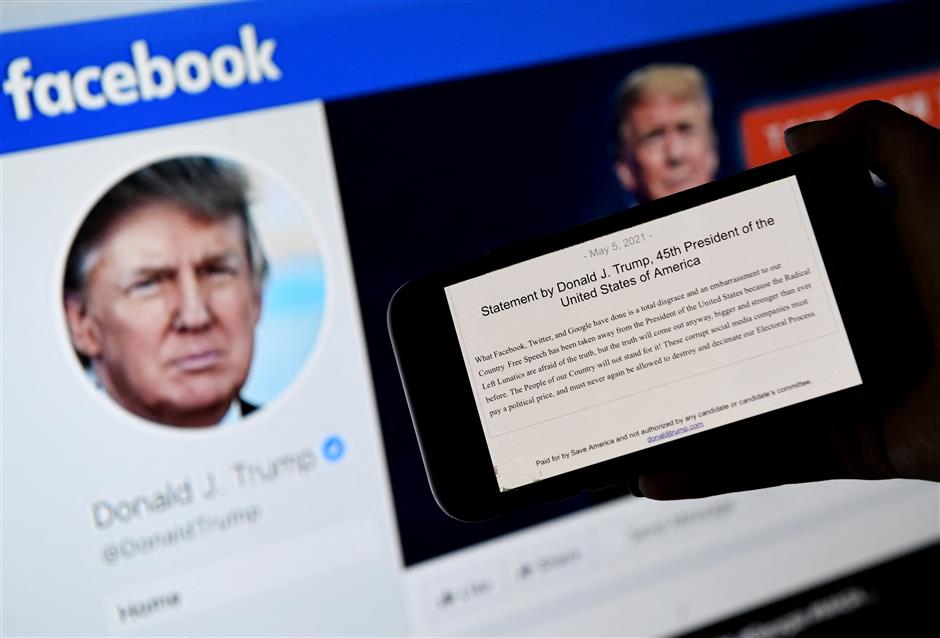 In this file photo illustration taken on May 5, 2021, a phone screen displays the statement of former US President Donald Trump on his Facebook page background in Arlington, Virginia.

Facebook on Friday banned former US president Donald Trump for two years, saying he deserved the maximum punishment for violating platform rules over a deadly attack by his supporters on the US Capitol.

The punishment will be effective from January 7, when Trump was booted off the social media giant, and comes after Facebook's independent oversight board said the indefinite ban imposed initially should be reviewed.

"Given the gravity of the circumstances that led to Mr. Trump's suspension, we believe his actions constituted a severe violation of our rules which merit the highest penalty available under the new enforcement protocols," Facebook vice president of global affairs Nick Clegg said in a post.

In updating its policies, Facebook also said it will no longer give politicians blanket immunity for deceptive or abusive content based on their comments being newsworthy.

At the end of Trump's two-year ban, Facebook will enlist experts to assess whether his activity on the platform still threatens public safety, according to Clegg.

"If we determine that there is still a serious risk to public safety, we will extend the restriction for a set period of time and continue to re-evaluate until that risk has receded," Clegg said.

When Trump's suspension is lifted, he will face strict sanctions that could rapidly escalate to permanent removal for rule-breaking, according to Clegg.

Last month, the independent oversight board said Facebook was justified in ousting Trump for his comments regarding the deadly January 6 rampage at the US Capitol but that the platform should not have applied an "indeterminate and standardless penalty of indefinite suspension."

Trump said in a statement the ban was an "insult" to voters, renewing his false claims that the 2020 presidential election was stolen from him.

"They shouldn't be allowed to get away with this censoring and silencing," Trump said.

Trump also took a jab at Facebook founder Mark Zuckerberg, who attended a White House dinner with the former president in 2019.

"Next time I'm in the White House there will be no more dinners, at his request, with Mark Zuckerberg and his wife," Trump said. "It will be all business!"

Zuckerberg has long maintained private companies should not be the arbiters of truth.

"American democracy doesn't belong to Silicon Valley; it belongs to the American people," Clegg said in a podcast with Richard Reeves of the Brookings Institution.

"And it's the legislators and politicians of this country who in the end have to govern the rules that prevail."

Some activists criticized Facebook for even opening the door to reinstating Trump.

Angelo Carusone of left-leaning watchdog Media Matters for America called Facebook's move dangerous, saying if Trump is reinstated, "the platform will remain a simmering cauldron of extremism, disinformation and violence."

Activists in a group that calls itself The Real Facebook Oversight Board said: "Facebook shouldn't have needed a US$130 million Oversight Board and a team of law professors to tell them dictators and authoritarians were running wild on their platform."

White House press secretary Jen Psaki, when asked about the Facebook decision, said a social media platform which is disseminating information to millions of Americans "has a responsibility to crack down on disinformation... whether it's about the election or even about the vaccine."

As part of its new policy, Facebook will step back from its "newsworthiness" exception which allowed false information from Trump and others to circulate.