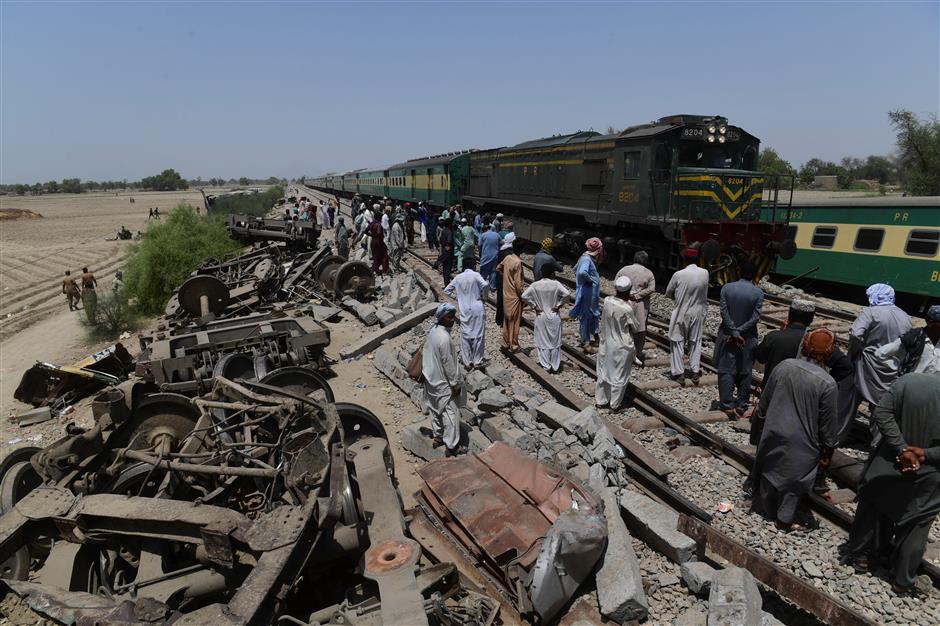 A passenger train passes by the wreckage of a train in Daharki on Tuesday, a day after a packed inter-city train ploughed into another express that had derailed killing at least 63 people.

At least 63 people died early on Monday when a high-speed passenger train knifed through carriages of another express that had derailed minutes earlier near Daharki in Sindh province.

It took army and civil engineers a day and a half to clear the wreckage of carriages that were crushed or sliced open like tin cans.

A heavy stench of diesel, sweat and blood hung over the scene, with workers saying bodies were still being pulled overnight from mangled carriages.

"This is the most colossal accident I have seen in about 10 years of service," railway engineer Jahan Zeb said, his eyes puffy from sleeplessness.

The Millat Express was heading from Karachi to Sargodha when it derailed, its carriages strewn over the tracks as the Sir Syed Express from Rawalpindi arrived minutes later in the opposite direction, smashing into it.

The accident has reignited debate about the parlous state of Pakistan's public transport system – particularly a rail network that has seen little investment in decades.

It is not known what caused the Millat Express to jump its tracks, but Interior Minister Sheikh Rashid – a former railways minister – described that section of the line as "a shambles," while current minister Azam Swati called it "really dangerous."

Usman Abdullah, the deputy provincial commissioner, said that 63 people had died in the accident, issuing two lists that named 51 victims and marked 12 others as unidentified. They ranged from a months-old infant to a woman who was 81.

Pakistan Railways has not issued a final death toll, but spokesperson Ijaz Shah said the families of those killed would receive compensation of 1.5 million rupees (US$9,600).

Khan Mohammad, station master at nearby Reti junction, said more lives could've been saved if they had just a few more minutes after the derailment.

"I saw a 6 or 7-year-old girl trapped underneath the locomotive, her knee stuck in the track," he said.

"We somehow rescued her, and she was miraculously alive."

But then the oncoming train hit.

"If there had been a delay of about 10 minutes, this accident could have been averted," the station officer added.

The crash happened around 3:30am when most of the 1,200 passengers aboard the two trains would have been dozing.

Farmer Ali Nawaz, 47, was out watering his crop – normal at this time of year to stop summer evaporation – when he heard screeching sounds and then saw flames. "We gathered that the train had derailed and frantically started calling up the railways official," he said.

"While we were trying to call, the other train came up ... with a very big blast and flames riding high in the sky."