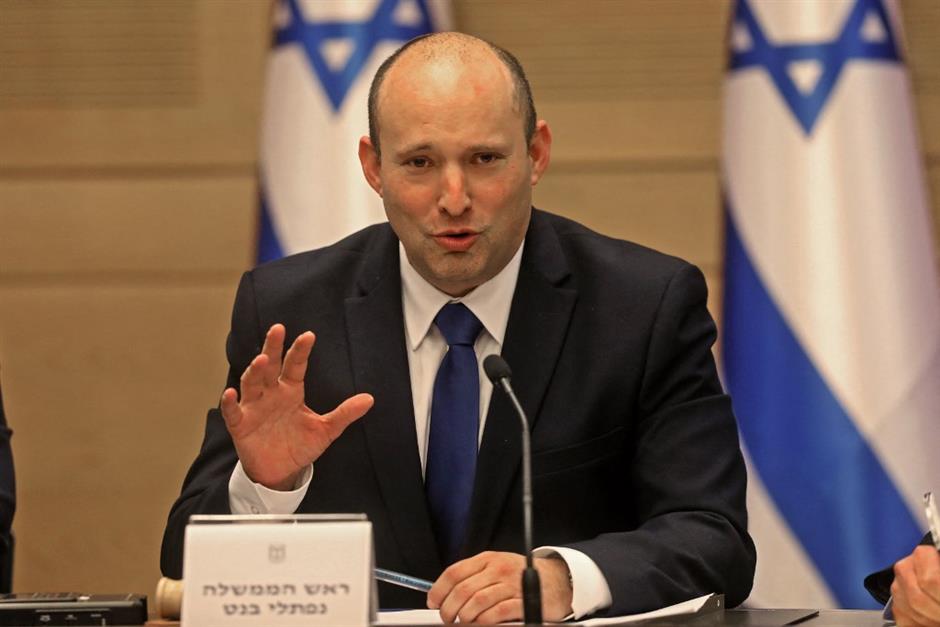 Israel's incoming Prime Minister Naftali Bennett gives an address before the new cabinet at the Knesset in Jerusalem on June 13, 2021. Featuring Israeli political veterans and a record number of female lawmakers, a motley coalition including two left, two center, one Arab Islamist and three right-wing parties came to power Sunday in an eight-party alliance united by animosity for outgoing prime minister Benjamin Netanyahu.

Naftali Bennett, leader of the right-wing Yamina (United Right) party, was sworn in as new Israeli prime minister on Sunday night, sending Benjamin Netanyahu to the opposition after a record 12-year rule.

This came after the new coalition government, headed by Bennett and Yair Lapid, leader of the centrist Yesh Atid (Future) party, was approved by the parliament, or Knesset, in a vote of confidence.

In the vote of confidence held in the parliament earlier, 60 lawmakers of the 120-member chamber voted in favor of the new government while 59 voted against it.

TV footages of the parliament session showed Bennett and Lapid taking their new seats at the coalition seats in the parliament, while Netanyahu, Israel's longest-serving leader, moved to the back seats of the opposition.

At the same time, the 27 new ministers of the new governing coalition were also sworn in.

The new coalition includes eight parties, including the Islamist Ra'am party, the first Arab faction to be included in a governing coalition in Israel.

Thousands of Israelis gathered on Rabin Square in central Tel Aviv on Sunday night to celebrate the end of Netanyahu's rule.

The forming of the new coalition government has ended a political crisis in Israeli, that has seen four elections in two years.