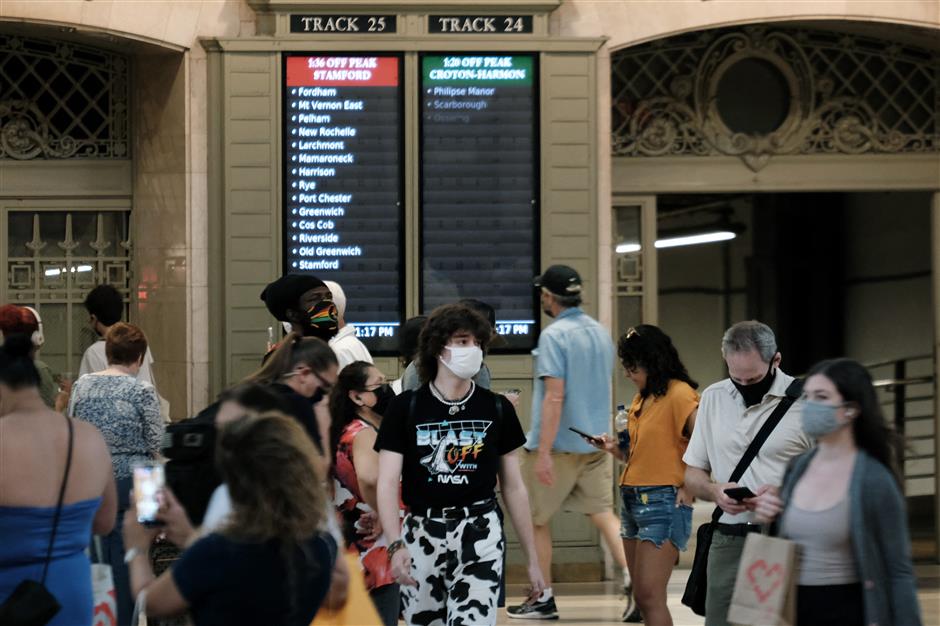 People vaccinated against COVID-19 in high-risk parts of the United States should resume wearing masks indoors, the top health authority said on Tuesday, a major reversal in guidance that underscored the country's struggle to suppress the Delta variant.

President Joe Biden said the announcement showed that America needs to "do better" on vaccinations, adding that a vaccine mandate for the country's more than 2 million federal workers is now "under consideration."

As recently as last week, the CDC had defended its surprise decision in May that vaccinated people did not have to wear masks indoors in most circumstances.

In another setback, the White House on Tuesday also ordered all its staff to mask up again due to local transmission rates in Washington.

According to the latest CDC data, 63 percent of the country's more than 3,200 counties are experiencing substantial or high transmission.

Biden said he would lay out new steps on Thursday to overcome the lag in vaccinations after the country's strong start to its program.

In a separate address to the US intelligence community, when asked about a possible vaccine mandate for US federal workers, Biden replied: "That's under consideration right now."

On Monday, the Veterans Affairs department said it would require its front-line health workers, some 115,000 people, to get the shot, becoming the first federal agency to institute the requirement.

Walensky stressed that so-called "breakthrough" cases among people who are vaccinated remain rare – shots reduce the risk of symptomatic disease seven-fold, and hospitalizations and deaths by a factor of 20.

"That leads us to believe that the breakthrough infections, rare as they are, have the potential to forward transmit at the same capacity of an unvaccinated person," she said.

To stem the spread of the Delta variant, the CDC will recommend schools adopt universal masking, including teachers, staff, students and visitors, regardless of vaccination status, when they reopen in fall, she added.

Infection numbers in the United States are now swelling, thanks to the Delta variant, which accounts for around 90 percent of cases.

The latest seven-day average of daily cases is more than 56,000, similar to levels last seen in April.

Forty-nine percent of the US population is fully vaccinated, but the vaccination rate is heavily skewed toward politically liberal parts of the country.

Walenksy stressed she saw masks as a "temporary" measure, adding: "What we really need to do to drive down these transmissions in areas of high transmission is to get more and more people vaccinated."

﻿
Special Reports
﻿
61922
,
61927
,
Vaccinated people in high-risk areas told to mask again in US
S. Korea, DPRK restore communication hotlines
One dead, four missing in blast at German chemical park
Biden announces end of US combat operations in Iraq
'Crowds' take to the streets to protest at COVID-19 lockdowns
COVID-19 vaccination for children likely to start by September
Tensions high as Haiti says farewell to slain president
Tokyo 2020: It's time for the Games to begin
Fewer than 1,000 to watch Tokyo 2020 opening ceremony in stadium: official
COVID Delta variant to dominate within months: WHO
EXPLORE SHINE