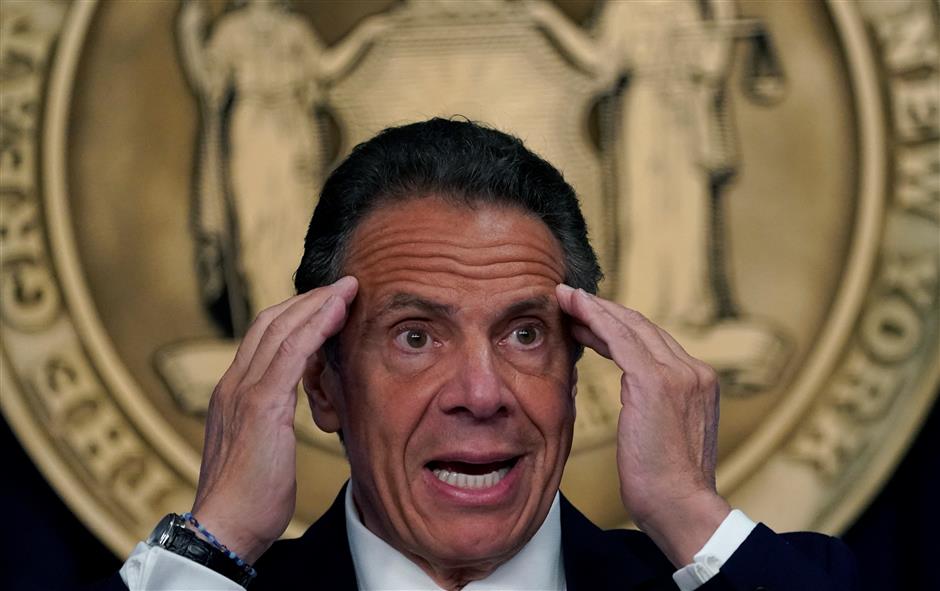 In this file photo New York Governor Andrew Cuomo holds a news conference in New York on May, 3, 2021.

But his position was looking increasingly untenable late Tuesday after Biden and House speaker Nancy Pelosi said the three-term governor should step down and state lawmakers moved to impeach him.

"I think he should resign," Biden told reporters in Washington.

The explosive report detailed allegations by 11 women that paint a "deeply disturbing yet clear" picture of a pattern of abusive behavior by Cuomo and his senior staff, state Attorney General Letitia James said, announcing the findings.

It was not clear if the governor would face criminal prosecution, with James saying the investigation was "civil in nature," but US media reported that the district attorney's office in state capital Albany had opened an investigation.

She said Cuomo engaged "in unwelcome and non-consensual touching and making numerous comments of a suggestive sexual nature that created a hostile work environment for women."

The investigation also found that Cuomo and his senior team took retaliatory action against at least one former employee for coming forward with her story, she added.

"I am 63 years old. I have lived my entire adult live in public view. That is just not who I am. And that's not who I have ever been."

And he suggested that resignation was not on his mind, saying: "What matters to me at the end of the day is getting the most done I can for you.

"And that is what I do every day. And I will not be distracted from that job. We have a lot to do."

Cuomo also published a response to every allegation made by the women against him on his website, adding: "Please take the time to read the facts and decide for yourself."

Defending his actions, he included photos of prominent Americans, including Biden and ex-President Barack Obama, kissing and hugging people.

One former employee said Cuomo slipped his hand under her blouse last year, while a trooper on Cuomo's protective detail said he inappropriately touched her stomach and hip.

His conduct was "not just old fashioned affection and behavior as he and some of his staff would have it, but unlawful sex-based harassment," said Anne Clark, one of the lawyers heading the investigation.

None of the women welcomed his attentions, the other lawyer leading the probe, Joon Kim, said. "All of them found it disturbing, humiliating, uncomfortable and inappropriate."

Clark detailed one incident where Cuomo prepared a letter he wanted to release to the press attacking one of the alleged victims, though he was ultimately persuaded not to.

And Kim said Cuomo and his staff fostered a "climate of fear" that kept women from speaking out.

The investigators said that at least one report has been made to police about Cuomo's behavior, and that their findings could be used in any criminal investigations.

The women involved can also decide whether they want to sue Cuomo, they said.

"I am inspired by all the brave women who came forward. But more importantly, I believe them," said James.