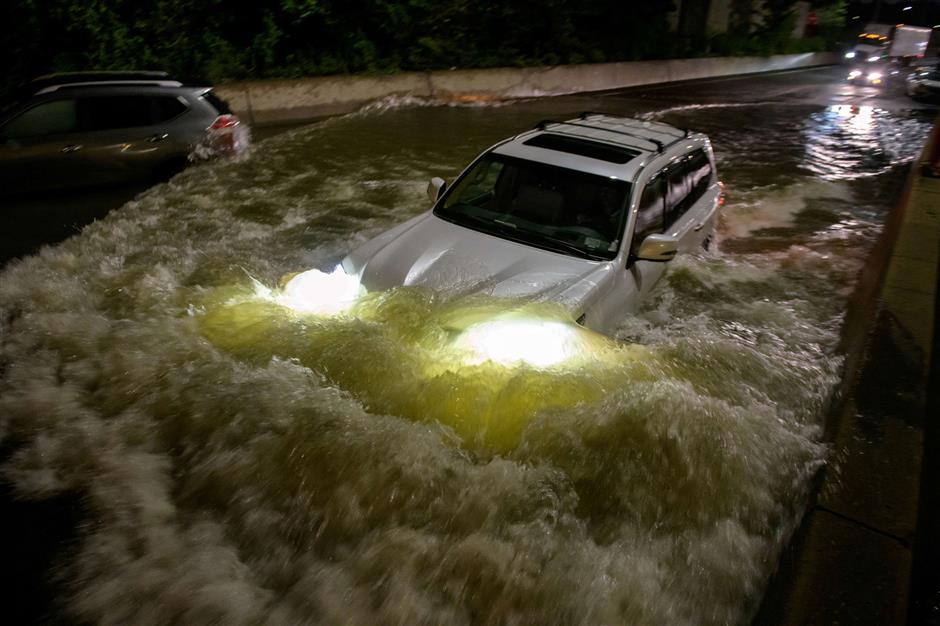 A motorist drives a car through a flooded expressway in Brooklyn, New York, early on September 2, 2021.

Flash flooding caused by the remnants of Hurricane Ida killed at least 41 people in the New York area overnight into Thursday, including several who perished in their basements during the "historic" weather event that officials blamed on climate change.

Record rainfall, which prompted an unprecedented flash flood emergency warning for New York City, turned streets into rivers and shut down subway services as water cascaded down platforms onto tracks.

"I'm 50 years old and I've never seen that much rain ever," said Metodija Mihajlov whose basement of his Manhattan restaurant was flooded with 92cm of water.

"It was like living in the jungle, like tropical rain. Unbelievable. Everything is so strange this year," he told AFP.

Hundreds of flights were canceled at LaGuardia and JFK airports, as well as at Newark, where video showed a terminal inundated by rainwater.

"We're all in this together. The nation is ready to help," President Joe Biden said ahead of a trip on Friday to the southern state of Louisiana, where Ida earlier destroyed buildings and left more than a million homes without power.

Flooding closed major roads across New Jersey and New York boroughs including Manhattan, The Bronx and Queens, submerging cars and forcing the fire department to rescue hundreds of people.

"The majority of these deaths were individuals who got caught in their vehicles," he said.

Twelve died in New York City, including 11 who could not escape their basements, police said. The victims ranged from the ages of 2 to 86.

"Among the people MOST at risk during flash floods here are those living in off-the-books basement dwellings that don't meet the safety codes necessary to save lives," lawmaker Alexandria Ocasio-Cortez tweeted.

"These are working class, immigrant, and low-income people & families," she added.

Three also died in the New York suburb of Westchester while another three died in Montgomery County outside Philadelphia in Pennsylvania, a local official confirmed.

Ida blazed a trail of destruction north after slamming into Louisiana over the weekend, bringing severe flooding and tornadoes.

"You do not know how deep the water is and it is too dangerous," the New York branch of the National Weather Service said in a tweet.

The NWS recorded 80 millimeters of rain in Central Park in just an hour – beating a record set just last month during Storm Henri.

The US Open was also halted as howling wind and rain blew under the corners of the Louis Armstrong Stadium roof.

New Yorkers woke to clear blue skies on Thursday as the city edged back to life but signs of the previous night's carnage weren't far away: Residents moved fallen tree branches from roads as subway services slowly resumed.

It is rare for such storms to strike America's northeastern seaboard and comes as the surface layer of oceans warms due to climate change.