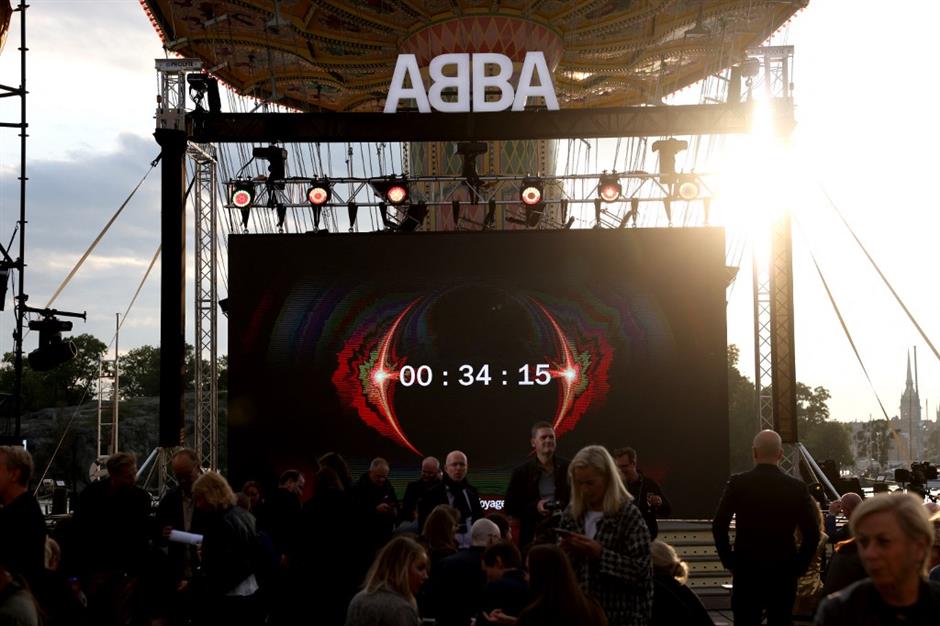 The countdown of Swedish group ABBA Voyage event is seen on September 2, 2021 on a display at Grona Lund, Stockholm, prior to the presentation of the first new song after nearly four decades.

Nearly four decades after disbanding and vowing never to get back together, Swedish superstars ABBA on Thursday announced a musical comeback with a new album and a London show featuring their performances captured by digital avatars.

ABBA notched up over 400 million album sales over 50 years despite parting ways in 1982 and resolutely resisting all offers to work together again – until now.

"We have made a new album with ABBA!" the band's Bjorn Ulvaeus and Benny Andersson announced via a video presentation in London, delivering the news fans have waited decades for.

But on Thursday, Ulvaeus and Andersson put an end to the suspense, following hints that something was in the pipeline.

After the video announcement, both men appeared in person, dressed in black, for a presentation of the forthcoming album.

"The album is in the can now, it's done," said Andersson, describing the group's return to the studio, against the spectacular backdrop of the view from the top of London's ArcelorMittal Orbit tower.

"We've done as good as we could at our age.

The pair looked relaxed and described their reunion as very friendly.

"No imagination could dream up that: to release a new album after 40 years and still be the best of friends", said Ulvaeus.

"It's the most fun thing you can do: to write songs," he added.

The album will come out on November 5, the musicians said, with the show expected in May 2022.

The now septuagenarian stars of pop classics such as "Dancing Queen", "The Winner Takes It All" and "Take a Chance on Me", last recorded new music together in the 1980s.

British radio presenter Zoe Ball, hosting the interview, said: "This is huge: yes ABBA are back together officially."

She hailed this as "one of the biggest reunions ever".

The presentation came after the group – Anni-Frid Lyngstad, 75, Agnetha Faltskog, 71, Ulvaeus, 76, and Andersson, 74 – announced on Twitter last week: "Thank you for waiting, the journey is about to begin."

The Swedish pop icons had announced they were returning to the studio in 2018, saying: "We all four felt that, after some 35 years, it could be fun to join forces again and go into the recording studio."

Two new songs – "I Still Have Faith in You" and "Don't Shut Me Down" – were played in London Thursday, featuring the band's characteristic sound.

Acknowledging their age, the musicians said they were not trying to imitate contemporary stars.

"We're not competing with (Canadian rapper) Drake and all those other guys," said Andersson.

The musicians also described the process of being transformed into digital avatars using hologram technology for a new show set to launch in London next year.

They described how they were photographed in leotards to create the avatars for the show called "ABBA Voyage" which will play at a theater being built close to the presentation venue in east London's Queen Elizabeth Olympic Park.

He said the show will feature the group as "digital characters" in 1979 when they were "in their prime". They will look "perfectly real", he said.

The show is "technically immensely complicated, the screen, the sound, all the lights", he added.

It will feature 22 songs, mostly the group's classic hits, and last 90 minutes, the musicians said, with tickets going on sale later this month.

The group broke up in 1982 by which time both of the quartet's married couples were divorced.

They long steered clear of a reunion despite their music's enduring popularity, fuelled by a hit compilation album in 1992, the "Mamma Mia" musical and later spin-off films starring Meryl Streep, Colin Firth and Pierce Brosnan.

"There is simply no motivation to regroup. Money is not a factor and we would like people to remember us as we were," Ulvaeus said in a 2008 interview.

According to Celebrity Net Worth, each member of Abba is worth between $200-300 million. In 2000, they turned down a $1 billion offer to perform a 100-show world tour.

"They're very independently wealthy so I don't think it's because of the money," Swedish Abba expert and author of several books on the group Carl Magnus Palm said of their comeback in a comment to AFP.

"I think they're genuinely excited by the possibilities of this."