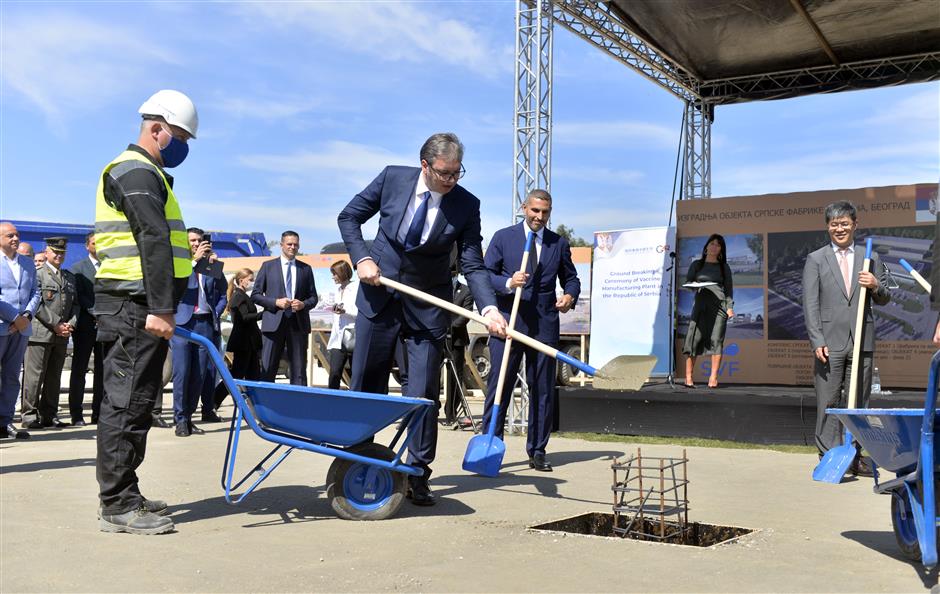 Construction of the first Chinese COVID-19 vaccine production facility in Europe started in Serbia on Thursday.

The factory is planned to produce 30 million vaccine doses annually starting in April 2022, and is expected to supply Serbia and several countries in the region and Europe with the Chinese-developed Sinopharm vaccines.

The foundation stone for the new factory was laid by Serbian President Aleksandar Vucic in the presence of Chinese Ambassador Chen Bo, according to a press release from the president's office.

Vucic said that he was proud that Serbia, together with partners from China and the United Arab Emirates, was "trying and seems to be able to solve some global problems."

"This is not a partnership of interest but a proof of friendship," Vucic said.

Back in January this year, Serbia started a mass vaccination campaign with the Sinopharm jab, which has been most widely used among Serbian citizens along with products from other manufacturers.

In June, Serbia started to produce Russia's Sputnik V COVID-19 vaccine at the Institute of Virology, Vaccines and Sera "Torlak" in Belgrade.

Chinese vaccines, including Sinopharm and Sinovac, have been approved by the World Health Organization for emergency use.

Chinese President Xi Jinping said on Thursday while addressing the 13th BRICS summit via video link that China will strive to provide a total of 2 billion doses of COVID-19 vaccines to the world by the end of this year, noting that China, to date, has provided more than 1 billion doses of finished and bulk vaccines to over 100 countries and international organizations.

Since the pandemic broke out, China has sent medical aid and batches of vaccines to Serbia and helped build two "Fire Eye" laboratories for PCR testing. Chinese doctors spent months helping set up prevention measures in the country.