France recalls ambassadors to Australia, US in escalating row 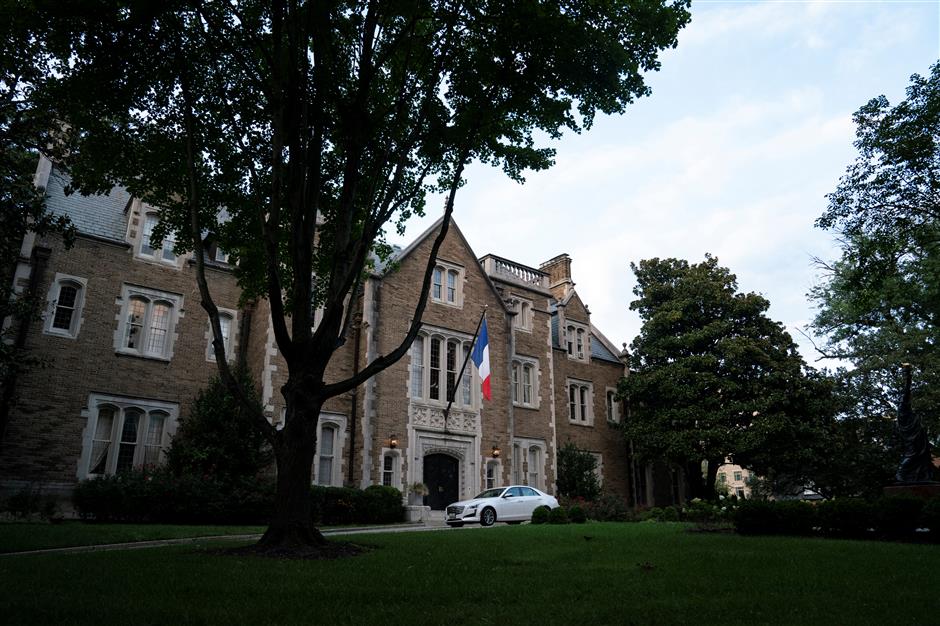 The home of the French Ambassador to the US, Philippe Etienne, is seen on the evening of September 17, 2021, in Washington, DC.

France on Friday recalled its ambassadors to the United States and Australia for consultations in a ferocious row over the scrapping of a submarine contract, an unprecedented step that revealed the extent of French anger against its allies.

President Emmanuel Macron ordered the recalling of the envoys after Canberra ditched a deal to buy French submarines in favor of US vessels, Foreign Minister Jean-Yves Le Drian said.

Le Drian said in a statement that the decision was made to "immediately" recall the two French ambassadors due to "the exceptional seriousness of the announcements made on September 15 by Australia and the United States."

The abandonment of the ocean-class submarine project that Australia and France had been working on since 2016 constituted "unacceptable behavior among allies and partners," the minister said.

"Their consequences affect the very concept we have of our alliances, our partnerships, and the importance of the Indo-Pacific for Europe," he added.

The move infuriated France, which lost a contract to supply conventional submarines to Australia that was worth A$50 billion (US$36.5 billion) when signed in 2016.

A White House official expressed "regret" over the French envoy's recall but added "we will continue to be engaged in the coming days to resolve our differences, as we have done at other points over the course of our long alliance."

Pentagon spokesman John Kirby meanwhile acknowledged that telephone talks earlier between US Defense Secretary Lloyd Austin and French counterpart Florence Parly showed "that there is still much work to do in terms of our defence relationship with France."

The French ambassador recalls from the United States and Australia, key allies of France, are unprecedented. Withdrawing envoys is a last resort diplomatic step taken when relations between feuding countries are plunged into crisis but highly unusual between allies.

"I am being recalled to Paris for consultations," France ambassador to the US Philippe Etienne wrote on Twitter. "This follows announcements directly affecting the vision we have of our alliances, of our partnerships and of the importance of the Indo-Pacific for Europe."

Paris sees itself as a major power in the Indo-Pacific due to overseas territories such as New Caledonia and French Polynesia which give it a strategic and military foothold unmatched by any other European country.

France had made no effort to disguise its fury even before the recalls and on Thursday Le Drian accused Australia of back-stabbing and Washington of Donald Trump-era behavior over the submarines deal.

The row has for now at least put on hold hopes of a post-Trump renaissance in Paris-Washington relations under Biden and his Secretary of State Antony Blinken, a fluent French speaker who was educated in Paris.

France meanwhile called off a gala at its ambassador's house in Washington scheduled for Friday.

The event was supposed to celebrate the anniversary of a decisive naval battle in the American Revolution, in which France played a key role.