A student armed with a hunting rifle opened fire at a university in the Russian city of Perm on Monday, killing at least six people and wounding many others, law enforcement said.

Students built barricades out of chairs to stop the shooter from entering their classrooms, they said. The university, which has 12,000 students enrolled, said about 3,000 people were on the campus at the time of the shooting.

The Investigative Committee had initially said eight people had been killed.

The gunman was wounded after resisting arrest and was being treated in hospital, the Investigative Committee law enforcement agency said in a statement.

University spokesperson Natalia Pechishcheva had earlier said the shooter had been "liquidated" but later said he was in police custody. Footage from the scene showed his prone body on the ground outside.

"There were about 60 people in the classroom. We closed the door and barricaded it with chairs," student Semyon Karyakin said. 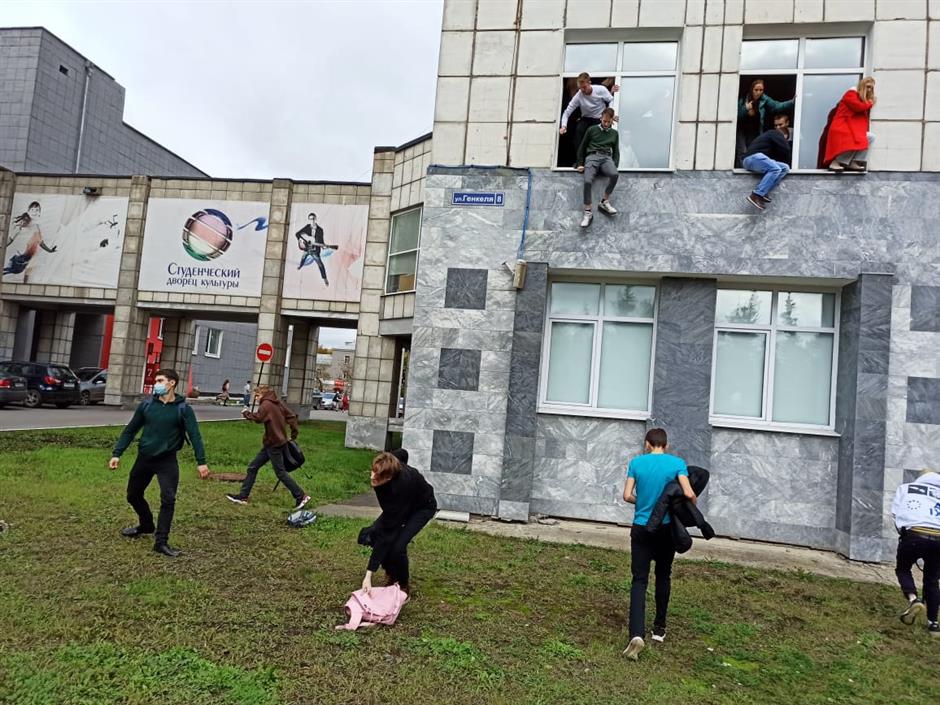 Students jump from windows of Perm State University during a shooting in Russia on Monday.

The gunman was identified as a university student who obtained the hunting rifle in May, the Investigative Committee said.

Local media identified the gunman as an 18-year-old student who had earlier posted a social media photo of himself posing with a rifle, helmet and ammunition. That photo could not be independently verified.

"I've thought about this for a long time, it's been years and I realized the time had come to do what I dreamt of," said a social media account attributed to him that was later taken down.

He indicated his actions had nothing to do with politics or religion but were driven by hatred.

The perpetrator used a gun designed to fire non-lethal rubber or plastic projectiles, the university press service said. Such weapons can be modified to fire other ammunition. State news agency RIA-Novosti cited local officials as saying the gunman owned the weapon legally.

Russia has strict restrictions on civilian firearm ownership, but some categories of guns are available for purchase for hunting, self-defense or sport, once would-be owners have passed tests and met other requirements.

The shootings were the latest in a series.

Earlier this year a lone teenage gunman opened fire at a school in Kazan, killing nine people and wounding many more.

That was Russia's deadliest school shooting since 2018 when a student at a college in Crimea killed 20 people before turning his gun on himself.