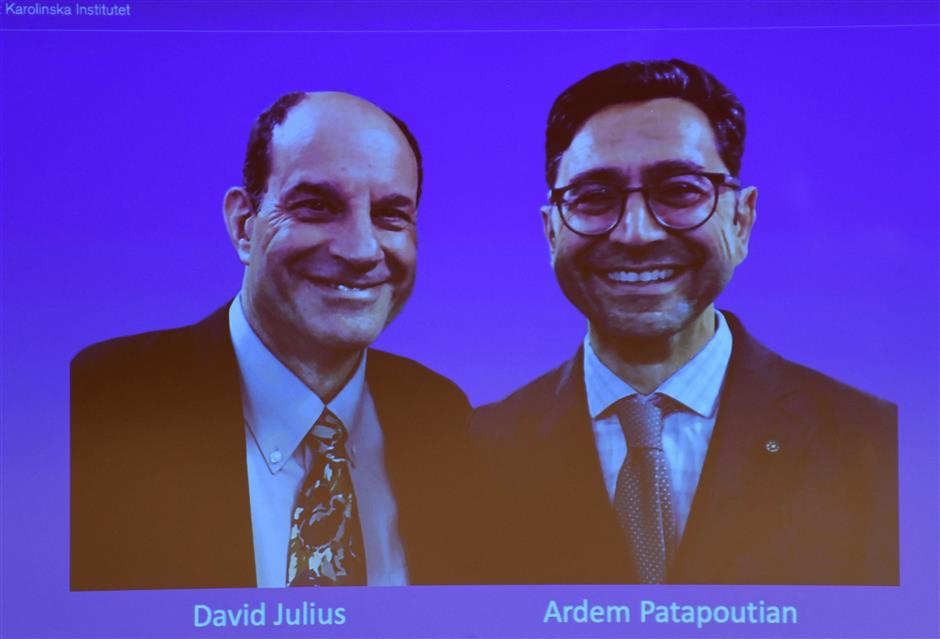 The winners of the 2021 Nobel Prize in Physiology or Medicine David Julius (L) and Ardem Patapoutian are displayed on a screen during a press conference at the Karolinska Institute in Stockholm, Sweden, on October 4, 2021.

Two scientists have shared the 2021 Nobel Prize in Physiology or Medicine, the Nobel committee announced on Monday.

The Nobel Assembly at Karolinska Institutet has today decided to award the 2021 Nobel Prize in Physiology or Medicine jointly to David Julius and Ardem Patapoutian "for their discoveries of receptors for temperature and touch."

"David Julius utilized capsaicin, a pungent compound from chili peppers that induces a burning sensation, to identify a sensor in the nerve endings of the skin that responds to heat. Ardem Patapoutian used pressure-sensitive cells to discover a novel class of sensors that respond to mechanical stimuli in the skin and internal organs," according to a statement by the committee.

"These breakthrough discoveries launched intense research activities leading to a rapid increase in our understanding of how our nervous system senses heat, cold, and mechanical stimuli. The laureates identified critical missing links in our understanding of the complex interplay between our senses and the environment," the statement added.

Intensive ongoing research originating from this year's Nobel Prize awarded discoveries focuses on elucidating their functions in a variety of physiological processes. This knowledge is being used to develop treatments for a wide range of disease conditions, including chronic pain, according to the statement.

Thomas Perlmann, secretary-general of the Nobel Committee and the Nobel Assembly, told a press conference that he contacted the laureates about the news and that they were "incredibility happy, and a bit shocked".

Ardem Patapoutian, born in 1967 in Beirut, Lebanon, received a Ph.D. in 1996 from California Institute of Technology, US, and he is now professor at Scripps Research, La Jolla, California.

According to the Nobel Foundation, this year's prize is 10 million Swedish krona (about US$1.14 million), which will be equally shared among the two laureates.