Former US Secretary of State dies from COVID-19 complications 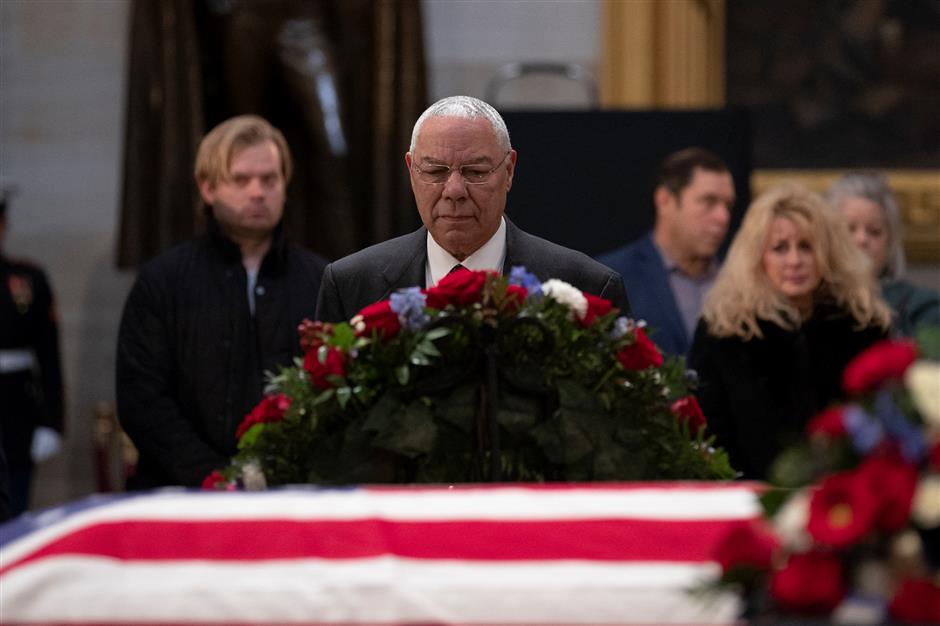 In this file photo taken on December 4, 2018, former US Secretary of State Colin Powell pays his respects as the remains of former US President George H. W. Bush lie in state at the US Capitol rotunda in Washington, DC.

Colin Powell, the first black secretary of state who saw his trailblazing legacy tarnished when he made the case for war in Iraq in 2003, died on Monday from complications from COVID-19.

The 84-year-old retired four-star general was fully vaccinated, his family said in a statement, making him one of the most high-profile US public figures to die of a breakthrough infection.

President Joe Biden led an outpouring of tributes from home and abroad, describing the officer-turned-statesman, who had battled cancer and was reportedly immunocompromised, as a breaker of racial barriers who believed in "the promise of America."

"Colin embodied the highest ideals of both warrior and diplomat," said Biden, who ordered flags flown at half-staff at federal government properties.

"He was committed to our nation's strength and security above all."

After engineering military victory in the 1991 Gulf War, Powell was so widely popular and respected that he was considered a strong candidate to become the first black US president.

He ultimately decided against running for the White House, although he later broke with his Republican Party to endorse Barack Obama.

A son of Jamaican immigrants, Powell frequently shattered glass ceilings in a career that took him from combat in Vietnam to becoming America's first black national security adviser under Ronald Reagan.

He was also the youngest and first African-American chairman of the Joint Chiefs of Staff under Reagan's successor, George H.W. Bush.

Serving four presidents, Powell made his reputation as a man of honor distant from the political fray – an asset in the corridors of power.

There were glowing tributes from all living ex-presidents except Donald Trump – the pair had a public falling out – with Barack Obama calling Powell "an exemplary patriot."

George W. Bush, who made Powell the highest-ranking black US public official ever when he chose him as secretary of state in 2000, mourned a "family man and a friend."

Powell had a reputation for bipartisanship, straight talk and integrity, and was praised for his officer's instincts of duty and honor.

US Cabinet secretaries paying their respect included Defense Secretary Lloyd Austin, who said Powell was among the "greatest leaders that we have ever witnessed," and Secretary of State Antony Blinken, who recalled how his predecessor had modernized the agency.

"He was a man of ideas but he wasn't ideological. He was constantly listening, learning, adapting. He could admit mistakes," Blinken said.

There were very few glaring missteps in public life, but Powell found it hard to live down his infamous February 2003 speech to the United Nations Security Council about the alleged existence of weapons of mass destruction in Iraq – evidence which was later proven to be false.

"It's a blot... and will always be a part of my record. It was painful. It's painful now," Powell said in a 2005 interview with ABC News.

The statesman's reputation never fully recovered, and ordinary Iraqis interviewed by AFP reacted indifferently or bitterly to the news of his death.

"His failed policy led to the destruction of Iraq and all the destruction that befell Iraq, and we went back to the past because of it, unfortunately," Amin Ahmed, 53, told AFP in Baghdad.