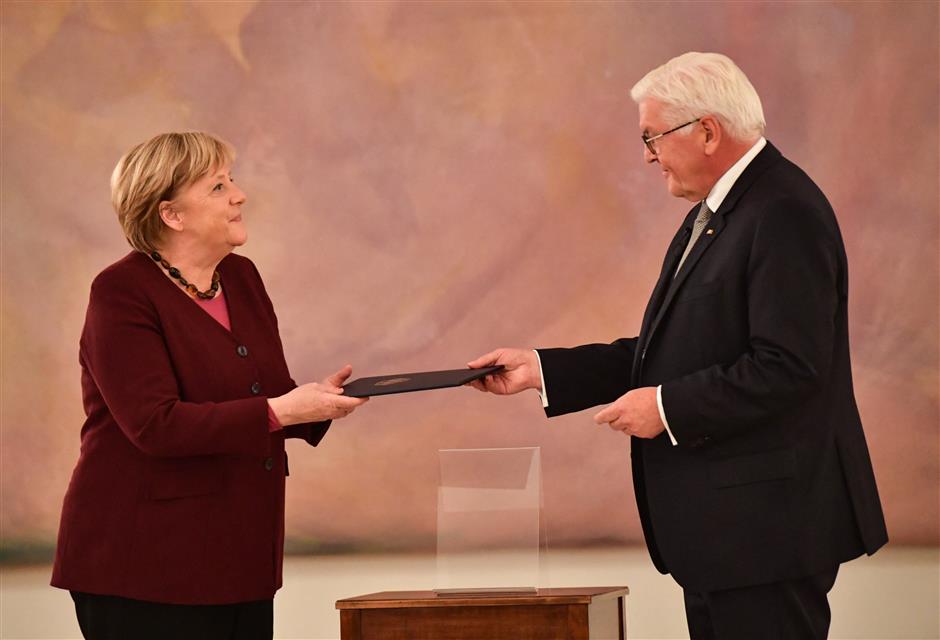 German Chancellor Angela Merkel is handed the certificate of dismissal by German President Frank-Walter Steinmeier during an official dismissal ceremony on Tuesday at the presidential Bellevue Palace in Berlin.

Angela Merkel took a step closer to political retirement on Tuesday after receiving her formal dismissal certificate from the post of chancellor after 16 years in office, though she will lead a caretaker government until her successor is sworn in.

Hours earlier, Merkel attended the opening session of Germany's new parliament in Berlin, taking a seat in the VIP gallery as the recently elected lawmakers met for the first time. Merkel, who first won a seat in the Bundestag 31 years ago, did not run again in the September 26 election.

Lawmakers elected Baerbal Bas, a member of the center-left Social Democratic Party, as speaker of the 736-member lower house. She succeeds Wolfgang Schaeuble, a 79-year-old conservative and former finance and interior minister, who was also the longest-serving member of the last parliament, having first been elected in 1972.

Bas, whose party narrowly beat Merkel's center-right Union bloc, has been a member of the Bundestag since 2009. The 53-year-old was a deputy leader of her party's parliamentary group in the last parliament and its spokesperson on health, education and research.

Bas told fellow lawmakers that she would work for fairer representation of women in parliament. She is only the third woman to head the Bundestag since its creation in 1949.

"The responsibility has by far not been spread fairly on all shoulders," she said.

While the Bundestag has more female members following last month's election, women are still a long way from reaching parity in the national legislature. More than a third, or 34.7 percent, of the new lawmakers are women compared to 31.4 percent in the previous parliament, according to the German news agency dpa.

Bas emphasized that even though parliament does not yet reflect the full diversity of German society, the new Bundestag has become more diverse, with more immigrant lawmakers and younger members.

She vowed to protect the lower house against hatred and promised, "I will defend democracy against its enemies."

The three parties that hope to form Germany's new government said last week they aim to have the country's next chancellor in place in early December, but acknowledged that they face a complex task.

The Social Democrats, environmentalist Greens and pro-business Free Democrats opened formal coalition talks following a preliminary deal earlier this month, which set out their priorities but left many open questions.

German coalition talks are an elaborate affair, producing an agreement that sets out details of the government's program for its four-year term. They have tended to get longer over the years as the country's political landscape has fragmented, meaning that elections rarely produce parliamentary majorities for traditional allies.

If the negotiations succeed, the new government will send Merkel's center-right Union bloc into opposition after 16 years at the helm. Her likely successor would be Olaf Scholz of the Social Democrats, her vice chancellor and finance minister since 2018.

Handing Merkel her dismissal certificate, German President Frank-Walter Steinmeier thanked her for steering the country through difficult times, particularly during her final four-year term. He cited the coronavirus pandemic, Britain's departure from the European Union and a US government under President Donald Trump that he said "had little to no interest in the international order and trans-Atlantic partnership."

Merkel last week received a warm farewell from fellow European Union leaders and former US President Barack Obama. Her final weeks as caretaker include representing Germany as the G-20 meeting in Italy and next week's UN climate conference in Glasgow.