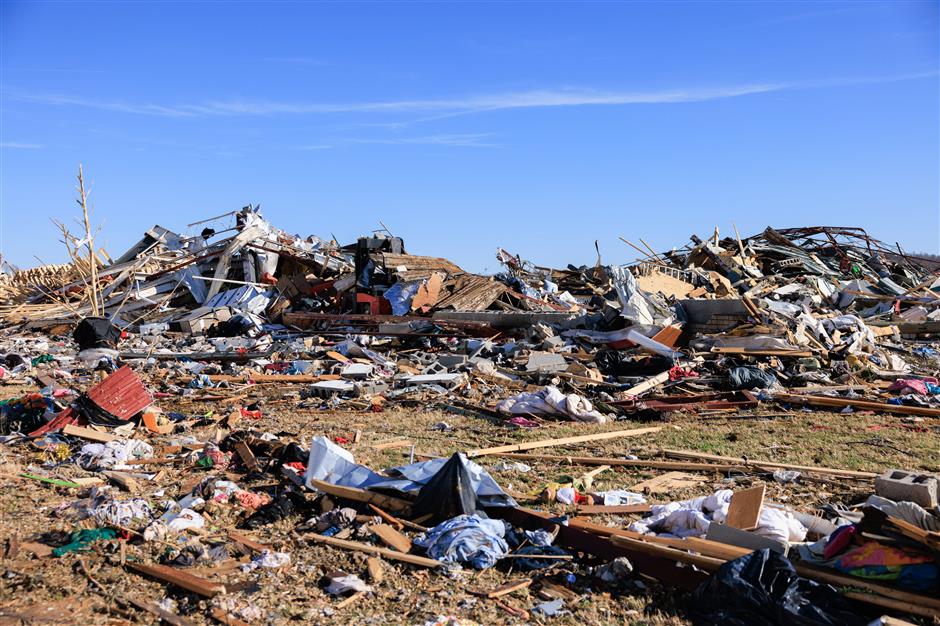 Debris are piled after a tornado tore through rural Kentucky.

Rescue and recovery efforts are underway after dozens of tornadoes swept through parts of the US Midwest and South late Friday and early Saturday, causing severe casualties and damage.

"There is no lens big enough to show you the extent of the damage" in Kentucky, Governor Andy Beshear told reporters on Sunday, as several other states have also reported storm-related damage and deaths.

The tornado outbreak of that magnitude was unusual during this time of the year and the road to recover could be long in some affected regions, experts and officials have said. 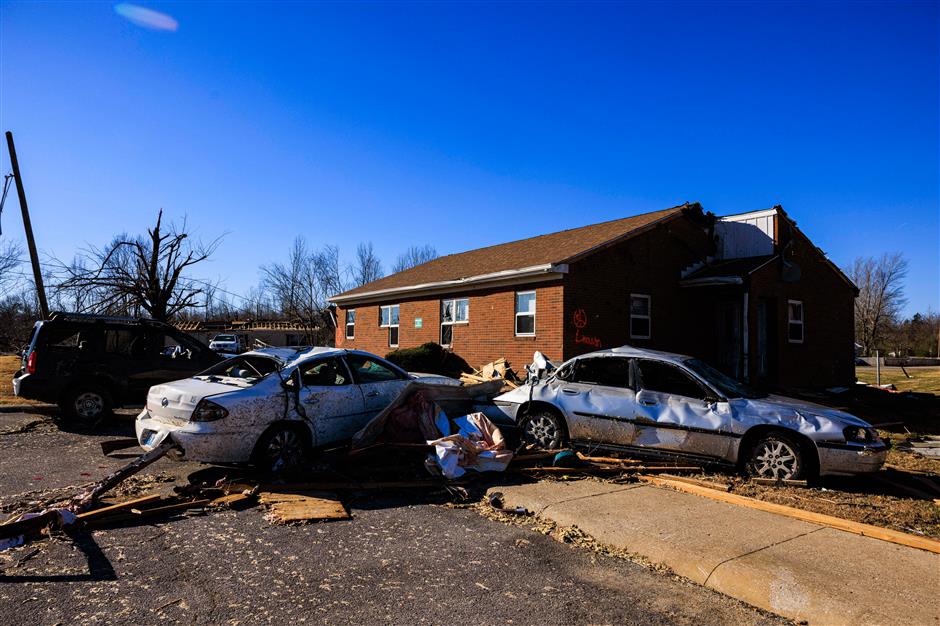 Houses, structures, and Vehicles are seen with damage after a tornado tore through rural Kentucky.

Eighteen counties in Kentucky have reported damage from an extremely devastating tornado, which carved out a long path of about 227 miles (roughly 365 kilometers) of terrain – almost all of that in the "Bluegrass State," said Beshear.

The National Weather Service on Sunday classified the tornado as an EF-3 and estimated its maximum width to be about three-quarters of a mile (roughly 1.2 kilometers) wide.

Beshear, after previously estimating that the state's death toll could exceed 100, said on Sunday afternoon that it might be as low as 50. "We are praying that maybe original estimates of those we have lost were wrong," he reportedly said. "If so, it's going to be pretty wonderful."

The comments came after a spokesperson for a candle factory in the western Kentucky town of Mayfield, which had been flattened by the violent twister, said that eight of the 110 workers on the overnight shift Friday had been confirmed dead and another eight are still missing, while 94 others have been accounted for.

The tornado also uprooted trees, downed power lines, and damaged or destroyed houses and vehicles in Mayfield, where thousands of people have been left homeless.

Bulldozers began removing debris in some neighborhoods on Sunday. Residents of Wickliffe, a county neighboring Mayfield which narrowly escaped storm's impact, told Xinhua that they had been encouraged to help shelter the displaced.

Rescue efforts are being conducted by local response teams, Kentucky emergency officials said. The state has also deployed the National Guard to conduct searches and take generators to help power shelters and hospitals.

"We want to focus today and the next day on life-saving. We really want to make sure that we find anybody who still might be trapped in the rubble," Deanne Criswell, administrator of the Federal Emergency Management Agency (FEMA), said on Sunday.

Tornadoes also ripped through Illinois, Tennessee, Arkansas, Missouri and Mississippi, and brought about deadly and tragic destruction in several of the states.

At least six people died in Illinois, where a distribution center owned by e-commerce giant Amazon in Edwardsville was struck and collapsed.

"The news from Edwardsville is tragic," Amazon founder Jeff Bezos tweeted on Saturday. "We're heartbroken over the loss of our teammates there, and our thoughts and prayers are with their families and loved ones."

Besides, four deaths were confirmed in Tennessee; two people were killed in Arkansas; and one death was reported in Missouri.

Tennessee Governor Bill Lee on Saturday surveyed storm damage in the western part of the state, including Dresden, where multiple downtown buildings were torn apart. "This is about the saddest thing I've ever seen," Lee told reporters. "The whole town, the whole town."

US President Joe Biden said on Saturday that he's "monitoring the situation very closely since early this morning" and called the disaster likely "one of the largest tornado outbreaks in our history."

The White House said on Sunday that Biden had declared that a major disaster exists in Kentucky and ordered federal aid to supplement the state and local recovery efforts "in the areas affected by severe storms, straight-line winds, flooding, and tornadoes."

"It's going to be a long recovery," said Criswell, adding that the FEMA is working with communities in making efforts to "help reduce the impacts that we're seeing from these severe weather events."

Tornadoes can form at any time of year, but most occur in the spring and summer months, according to meteorologists.

Defined as vertical funnels of rapidly spinning air, these violent twisters are born in thunderstorms and are often accompanied by hail. Their winds may top 250 miles (roughly 402 km) an hour and can clear a pathway a mile wide and 50 miles (roughly 80 km) long.

Tornadoes occur around the world, but the United States is a major hotspot with about a thousand tornadoes every year.

Victor Gensini, an extreme weather researcher at Northern Illinois University, pointed out, however, that the powerful tornadoes churning through the US states were unusual coming in December, when colder weather normally limits the storms.

Criswell said something similar on Sunday.

"We do see tornadoes in December, that part is not unusual, but at this magnitude I don't think we've ever seen one this late in the year," the FEMA chief said. "But it's also historic. Even this, the severity and the amount of time this tornado, or these tornadoes, spent on the ground is unprecedented."

She also warned such extreme weather events could be a "new normal," pointing to the effects of climate change.

Biden said "the intensity of the weather across the board has some impact as a consequence of the warming of the planet and the climate change."

"The specific impact on these specific storms, I can't say at this point," the president added. "But the fact is that we all know everything is more intense when the climate is warming – everything. And, obviously, it has some impact here, but I can't give you a quantitative read on that."