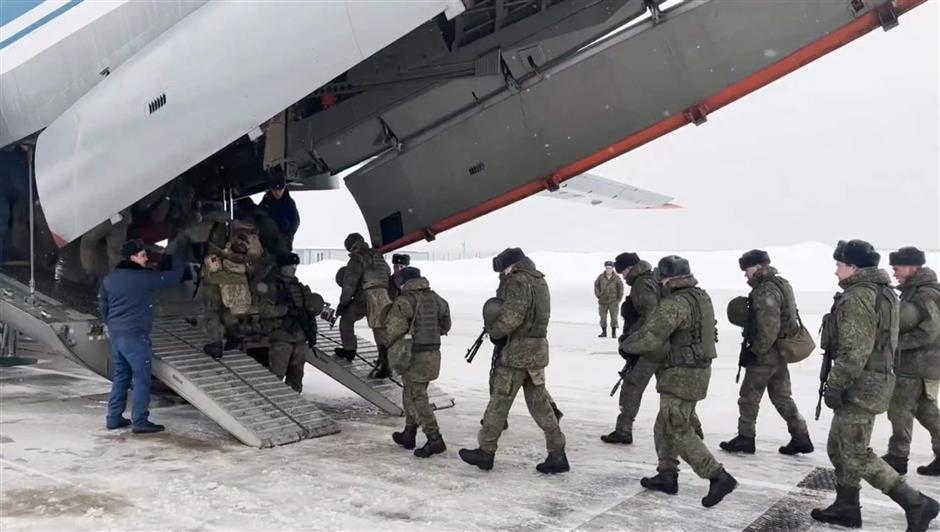 Russian troops board a plane at Chkalovsky Airport near Shchyolkovo, Moscow Oblast, Russia, on January 6, 2022.

After days of stormy unrest, the constitutional order has been largely restored in Kazakhstan, according to a statement by Kazakh President Kassym-Jomart Tokayev on Friday.

"Local authorities are monitoring the situation, but terrorists are still using weapons, causing damage to civilian property," Tokayev said during a meeting with the leadership of the Presidential Administration, the Security Council, and law enforcement agencies.

"Therefore, the counter-terrorist operation will continue until the total destruction of the militants," he said.

Protests erupted on Sunday after the government lifted a cap on fuel prices Saturday, causing a spike in the cost of fuel. Tens of thousands of citizens have since joined the demonstrations which soon spread into other parts of the country and turned increasingly violent.

Early Wednesday, Tokayev signed a presidential decree, accepting the resignation of the country's government, while the government members will continue to fulfill their duties until a new government is formed.

In the decree, Tokayev also declared a state of emergency in Almaty, the country's largest city, and the Mangystau Region in southwest Kazakhstan.

But the situation soon escalated into unprecedented violence against the government.

Later Wednesday, Tokayev said he intends to "act as tough as possible" as the situation becomes "extremely tense."

"Despite my repeated appeals for calm, individuals calling themselves 'protesters' continue to exacerbate the situation in the country," Tokayev said in his address to the people of Kazakhstan.

According to a report by TASS news agency on Thursday, a total of 12 law enforcement officers had been killed and 353 others injured in their clashes with the rioters in Almaty. Over 1,000 people were injured across Kazakhstan with almost 400 of them hospitalized as a result of the violent protests.

While the surging fuel prices seemed to be the direct cause of the protests, many believe external forces might have exploited the protests and played a role in provoking the riots.

In a televised speech on Thursday, Tokayev urged his people "not to succumb to internal and external provocations, the euphoria of rallies and permissiveness."

The Russian Foreign Ministry said on Thursday that it also views the riots in Kazakhstan as an attempt, stoked by the outside, to undermine the country's security and integrity with trained armed formations.

In a verbal message to Tokayev on Friday, Chinese President Xi Jinping said China strongly rejects any attempt by external forces to provoke unrest and instigate "color revolutions" in Kazakhstan.

The riots in Kazakhstan have also caused widespread concerns from the international community.

UN Secretary-General Antonio Guterres has called on parties in Kazakhstan to refrain from violence and promote dialogue so as to address the volatile situation, said his spokesman on Thursday.

Josep Borrell, high representative of the European Union for foreign affairs and security policy, also expressed "great concern" about the unrest in Kazakhstan on Thursday.

In a phone call with Tokayev on Thursday, Turkish President Recep Tayyip Erdogan said Turkey is in solidarity with Kazakhstan and hopes the unrest in the Central Asian country will ease soon.

Meanwhile, Turkish presidential spokesperson Ibrahim Kalin tweeted that peace and stability of Kazakhstan is a top priority for Turkey, adding "we are deeply saddened by the incidents and loss of lives in Kazakhstan."

On Friday, Secretary General of the North Atlantic Treaty Organization Jens Stoltenberg said he was concerned about the crisis and was following the situation very closely.