Kazakhstan's former intelligence chief has been arrested on suspicion of treason, the state security agency said on Saturday, as the former Soviet republic cracks down on a wave of unrest.

The detention of Karim Massimov was announced by the National Security Committee which he headed until he was fired by President Kassym-Jomart Tokayev on Wednesday after violent protests swept across the Central Asian nation.

Tokayev's office said he had told Russian President Vladimir Putin in a phone call that the situation was stabilizing. "At the same time, hotbeds of terrorist attacks persist. Therefore, the fight against terrorism will continue with full determination," it quoted him as saying.

Chinese President Xi Jinping on Friday sent a verbal message to Tokayev over the riots.

Noting that the riots have caused heavy casualties and property losses, Xi expressed his sincere sympathies to Tokayev in the message.

He said President Tokayev has taken decisive and effective actions at a critical moment, quickly calming the situation, which has shown his sense of responsibility as a statesman, and demonstrated a highly responsible attitude to the country and the people.

Furthermore, China strongly rejects any attempt by external forces to provoke unrest and instigate "color revolutions" in Kazakhstan, as well as any attempt to harm the friendship between China and Kazakhstan and disrupt the two countries' cooperation, the president added.

Xi said that China, as a fraternal neighbor and permanent comprehensive strategic partner of Kazakhstan, is ready to provide necessary support to help it overcome the difficulties.

No matter what risks and challenges get in the way, China will always remain as a trustworthy friend and reliable partner of Kazakhstan, and the Chinese people will forever stand with the Kazakh people, Xi added. 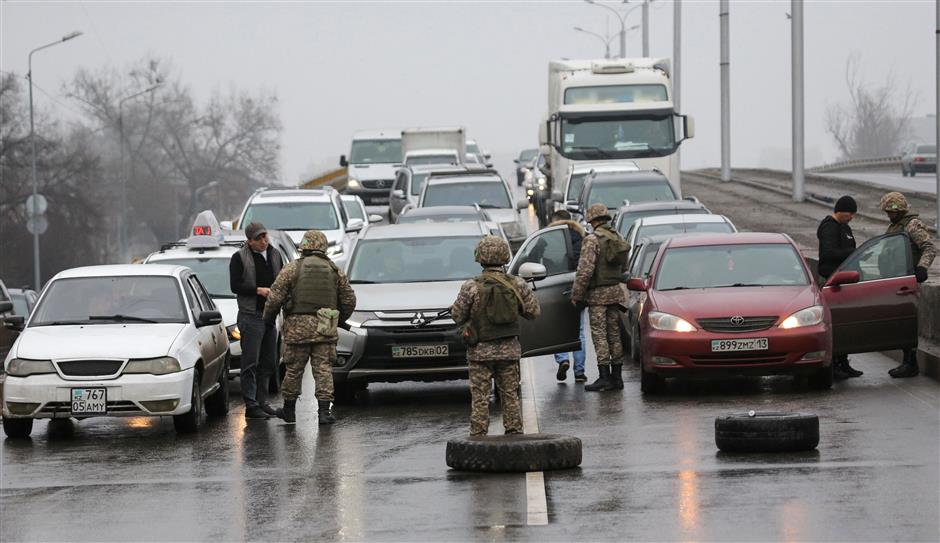 Kazakh law enforcement officers check vehicles on a road in Almaty on Saturday, after mass protests triggered by fuel price increase erupted all over the country.

The Kremlin said that Putin backed Tokayev's idea to convene a video call of leaders from the Collective Security Treaty Organization, under whose umbrella Russia and four other former Soviet republics have sent troops into Kazakhstan to help restore order.

Dozens of people have been killed, thousands have been detained and public buildings across Kazakhstan have been torched over the past week in the worst violence experienced in the oil and uranium producer since it became independent in the early 1990s as the Soviet Union collapsed.

Tokayev has ordered his troops to end what he has called attacks by bandits and terrorists.

He said on Friday the state had "slept through" instigators' preparations to launch attacks on the biggest city, Almaty, and across the country. Massimov's arrest indicated moves were under way against those deemed responsible.

Apart from heading the intelligence agency that replaced the Soviet-era KGB, Massimov was twice prime minister and worked closely with former president Nursultan Nazarbayev, the country's ruler for three decades until he turned over the presidency to Tokayev in 2019.

There were no details of the treason allegations. The security service said other officials were also detained, but did not name them.

On Friday, a pro-government politician said on television he had information that the security forces had been ordered to abandon Almaty airport so protesters could take it over. He said they had left a security building in the city undefended, enabling people to seize weapons.

It was not immediately possible to verify this account. The airport remains closed but is now under the control of Kazakh security personnel and Russian troops, according to Russia's defense ministry.

The demonstrations began as a response to a fuel price hike but swelled into a broad movement against Tokayev's government and 81-year-old Nazarbayev.

Tokayev removed Nazarbayev on Wednesday as head of the country's Security Council, a role in which he had continued to wield significant influence. Interfax news agency reported on Saturday that the council's deputy head had also been fired.

In Almaty, where security forces have reclaimed control of the streets since Friday, a reporter said occasional gunshots were heard on Saturday.

In the capital Nur-Sultan, police were stopping drivers at a checkpoint with armed soldiers nearby.

Tokayev announced a national day of mourning for today to commemorate those killed.