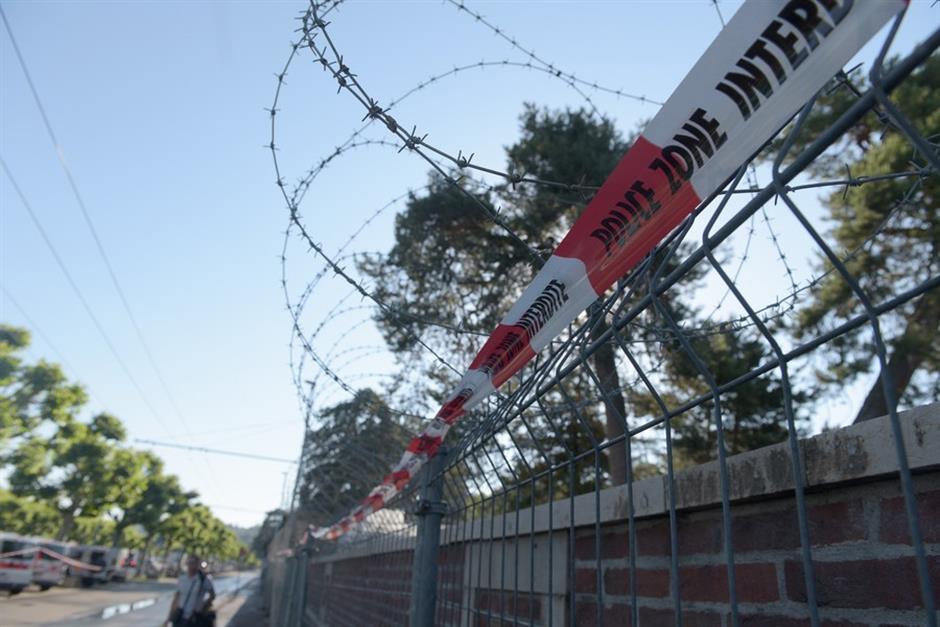 Photo taken on June 15, 2021 shows fences with barbed wires are seen outside the Villa La Grange, the venue for a summit in Geneva, Switzerland, between US President Joe Biden and his Russian counterpart Vladimir Putin.

A new round of security talks between the United States and Russia concluded Monday evening in Geneva without yielding any diplomatic breakthrough.

While the US side called the latest talks between the two major global powers "our diplomacy in pursuit of a de-escalation with Russia," the Russian side called the talks US-Russia "security guarantees negotiations."

Like the two previous bilateral US-Russia Strategic Stability Dialogues in Geneva last year, the US delegation is headed by US Deputy Secretary of State Wendy Sherman, while the Russian side is headed by Deputy Foreign Minister Sergei Ryabkov.

"The talks were difficult, long, very professional, deep, concrete, without attempts to gloss over some sharp edges," Ryabkov told a press briefing after the talks. "We had the feeling that the American side took the Russian proposals very seriously and studied them deeply."

Sherman told a separate press briefing after the talks that "We had a frank and forthright discussion over the course of nearly eight hours at the US Mission in Geneva. This is the third time the US-Russia Strategic Stability Dialogue has convened since President Biden and President Putin met in Geneva last June."

Ryabkov was cited by the Russian Mission in Geneva on Monday that what Russia seeks is legally binding guarantees of the North Atlantic Treaty Organization (NATO) not to expand further to the East.

"It should dismantle everything it has created while driven by anti-Russia phobias and delusional perceptions about our country's policies since 1997," he was cited as saying.

Ryabkov told reporters after the talks that "the main questions are still up in the air, and we don't see an understanding from the American side of the necessity of a decision in a way that satisfies us."

"We do not trust the other side," he stated. "We need ironclad, waterproof, bulletproof, legally binding guarantees - not assurances, not safeguards."

He said that he has told his US counterpart that Russia has no plans to attack Ukraine, and there was no reason to fear an escalation of tensions with Ukraine.

"Certain threats or warnings were put forward, We explained to our colleagues that we have no plans to attack Ukraine," Ryabkov said. "There is no basis for fearing any escalated scenario in this regard."

Sherman told reporters that the United States came to Monday's meeting to hear Russia's security concerns and to share its own, "We came with a number of ideas where our two countries could take reciprocal actions that would be in our security interests and improve strategic stability."

The senior US diplomat said that the US will not stop NATO's "Open Door" policy, it will not forego bilateral cooperation with sovereign states that wish to work with the United States, and it will not make decisions about Ukraine without Ukraine, about Europe without Europe, or about NATO without NATO.

"We've made it clear that if Russia further invades Ukraine, there will be significant costs and consequences well beyond what they faced in 2014. Russia has a stark choice to make," she said.

She also said that the United States offered to meet again soon with Russian officials to discuss these bilateral issues in more detail.

According to the US mission in Geneva, after Monday's talks with the Russian officials, Sherman will then travel to Brussels on January 11 to 12 for further consultations with NATO leadership, NATO allies, and EU officials.