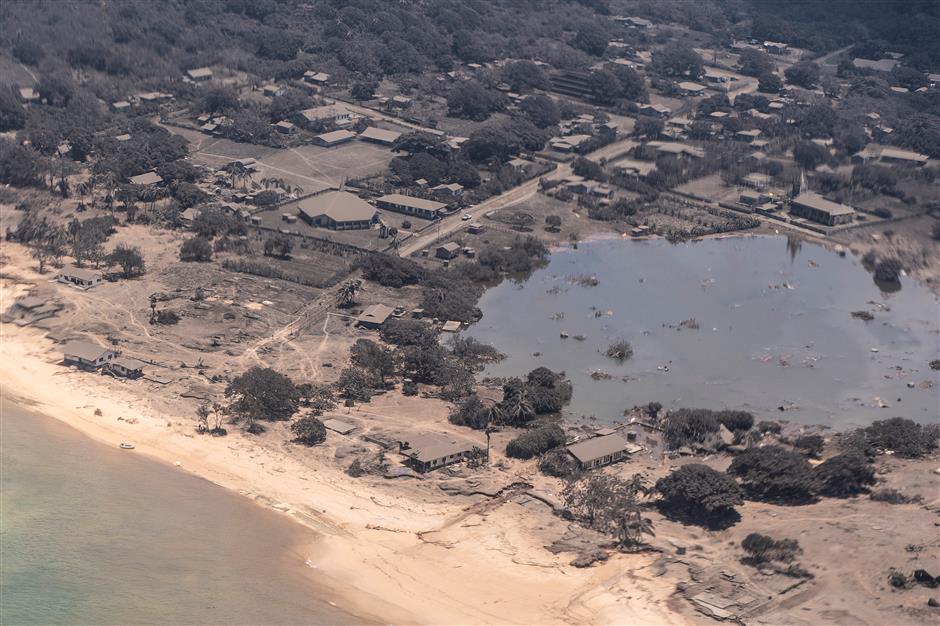 This handout photo taken on January 17, 2022, and received on January 18 from the New Zealand Defence Force shows a view from a P-3K2 Orion aircraft of an area covered in volcanic ash in Tonga, after the eruption of the Hunga-Tonga - Hunga-Haa'pai volcano on January 15.

They said the casualty toll remained at three dead and an unknown number of people injured.

"Needs assessments by the Tongan authorities are ongoing and should provide a better estimate of what is required of the international community," said Stephane Dujarric, the chief spokesman for UN Secretary-General Antonio Guterres. "We are on standby with teams and emergency supplies, and stocks in Tonga are being readied for distribution once humanitarian needs are identified."

"Our staff there are working to assist coordination and response efforts in-country," he told a regular press briefing. There are 23 UN workers in Tonga – 22 local hires and one international staffer.

Communications within the 36 inhabited of the nation's 169 islands were limited to satellite phones, as was the capital Nuku'alofa and between Tonga and the outside world.

The major submarine communications cable was severed, cutting voice, video and Internet services. Still, Veitch said, "I'm able to send basic messages by SMS (Small Message Service –text) to our colleagues through satellite systems, and we hope that soon phones will be back up and running."

While the natural choice for humanitarians is to fly in relief, Veitch said the Nuku'alofa airport remained closed because workers were unable to finish clearing ashfall. He said ships sailing from Australia and New Zealand would take six to eight days to arrive in a Tonga port.

He also said there is a question of just how the authorities would handle people coming to Tonga when it has extremely strict protocols against COVID-19. No cases have been reported in the nation. Authorities are keen to keep the country COVID-free, especially in light of past Pacific island populations wiped out by rampant disease.

While there are no casualties among the 23 UN workers, there are an unknown number of injuries on outlying islands, Veitch said.

He said damage reports from those islands are coming in slowly. The coordinator said it is possible that damage on the outlying islands may not be as severe since they are further from the volcaNo. The eruption occurred only 65 km from the main island of Tongatapu, home of the capital.

"We are concerned about the water situation," Veitch said. "I haven't heard that people have run out of water which would be obviously an emergency situation. Of course we have heard that shops are running out of food and also there has been quite a lot of ... mass purchasing as always happens in these circumstances, including of water and of food supplies too."

The sooner, the better to get the supplies, the coordinator said. "It is urgent."