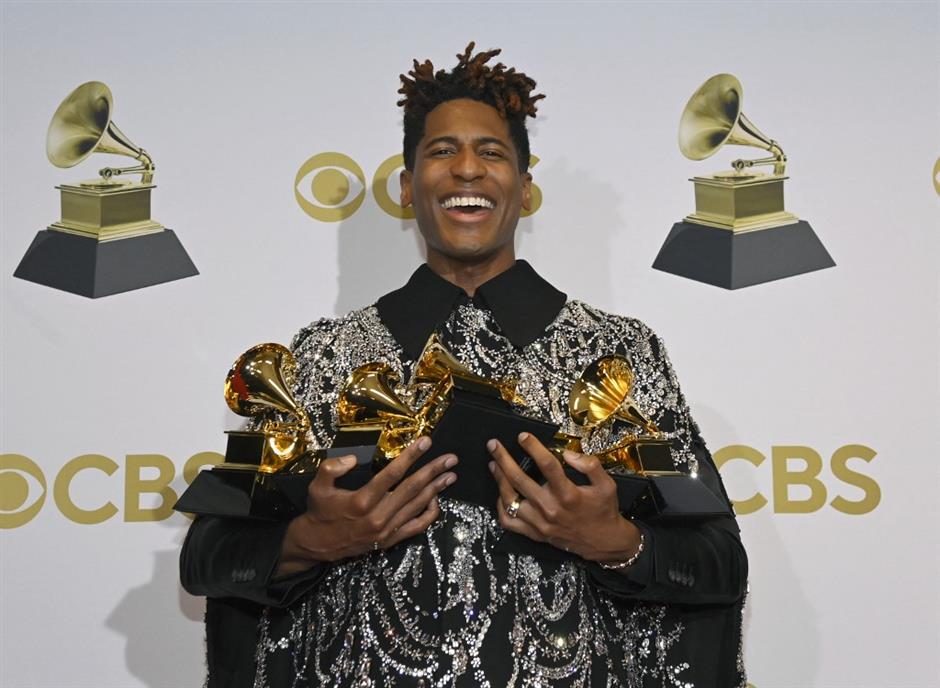 Industry watchers had tipped pop superstars as the likely big winners at Sunday's Grammys – but jazzman Jon Batiste instead was crowned king, taking home five awards including the prestigious Album of the Year prize.

At the star-studded gala, held for the first time in Las Vegas, Silk Sonic – the 70s revival project of Bruno Mars and Anderson .Paak – won all four of their potential prizes, including both Record and Song of The Year for their single "Leave The Door Open."

Olivia Rodrigo didn't win as many awards as predicted – but the Filipino-American pop phenom did scoop the coveted prize for Best New Artist, and two trophies in the pop category.

That meant the winners of all four top Grammys were people of color – a milestone for the Recording Academy, which for years has faced criticism that it disproportionately honored white men.

The night was heavy on performances but also held a number of somber moments – most notably when Ukrainian President Volodymyr Zelensky delivered a pre-taped plea for support.

Zelensky's message led into a performance by John Legend of the song "Free," with the help of Ukrainian singer Mika Newton, musician Siuzanna Iglidan and poet Lyuba Yakimchuk.

"On our land, we are fighting Russia, which brings horrible silence with its bombs. The dead silence," Zelensky said.

"Fill the silence with your music, fill it today to tell our story."

Despite being among the night's most nominated artists, pop juggernauts Billie Eilish, Justin Bieber and Lil Nas X were shut out completely.

But they all staged impressive performances: Eilish belted out "Happier Than Ever" in a lightning-backed downpour, Bieber delivered a crooned-up version of "Peaches," and Lil Nas X hosted an unabashed celebration of sexuality and queerness set to a medley of his songs including "MONTERO (Call Me By Your Name)."

"This is my biggest dream come true," the 19-year-old said as she accepted the gramophone for Best New Artist.

Big winner Batiste also performed, showcasing his elasticity as an artist by starting at the piano for a classical piece before transitioning to a rhythmic dance number.

The night's leading nominee with 11 nods, Batiste had already scooped four ahead of his big sleeper win for the year's best album.

But he looked shocked when presenter Lenny Kravitz declared him the night's big hit.

"I really don't do it for the awards," the 35-year-old Batiste told journalists backstage. "Music is something that's so subjective."

Earlier onstage, the artist born into a prominent New Orleans musical dynasty told a cheering audience: "I believe this to my core: there is no best musician, best artist, best dancer, best actor."

"I just put my head down and work on the craft every day," he continued. "It's more than entertainment for me – it's a spiritual practice."

The timing of the Grammys just one week after Will Smith stunned the world by slapping Chris Rock on stage at the Oscars added an extra layer of unpredictability to what is already usually one of the edgier nights on the showbiz awards circuit.

That fiasco prompted some gentle zings over the course of the night Sunday, but antics were virtually non-existent at what ultimately proved to be a heavily scripted show.

Music's chaos agent Kanye West stayed home even as he won two Grammys, one of which he shared with Jay Z.

Among the diverse crop of winners was Doja Cat, who took home her first ever Grammy in the pop category – which she had to sprint back to accept after dipping out of the gala for a bathroom break.

The Brooklyn-based Pakistani vocalist Arooj Aftab, who won her first Grammy for Best Global Music Performance for "Mohabbat," and had also been in the running for Best New Artist, told journalists the win left her "beyond thrilled."

And it was a special night for folk icon Joni Mitchell, who won the prize for Best Historical Album days after being honored at a moving tribute gala Friday.

She made a rare public appearance onstage, looking fly in a red leather beret, sunglasses and floral pants, her long blonde hair in pigtails.