Two Australian scientists working with an international team have captured images of a giant gas planet that is being formed some 500 light-years from Earth.

"It's been extremely exciting," Norris told Xinhua on Tuesday. "We had been looking for something like this for years, hoping to catch a young planet still being formed."

The researchers, writing on Tuesday in the Conversation, an online science and current affairs site, said their "rare baby snaps" revealed a glowing formation, estimated to be as hot as 2,000 degree Celsius, embedded within a thick, swirling halo of dust and gas beyond the solar system.

Their findings were made using observations from the Subaru Telescope in Hawaii and the Hubble Space Telescope.

"It was a difficult challenge as the planet is incredibly faint and extremely far away," Norris said.

"The big question was, how could we be sure we were seeing a forming planet, and not just a particularly dense clump of dust?"

"The key is that, because of the energy of its rapid, violent formation process, the planet glows red-hot. By comparing these different images taken in different colors we were able to spot its tell-tale glow."

Their discovery defies a long-held concept known as "core accretion" which explains how giant gas planets such as Jupiter and Saturn came into existence.

That theory is that the planets were created near "host" stars when dust grains clumped together into successively bigger grains, then pebbles, then rocks building up into a "cascade" of baby planets or "planetesimals".

In recent years, however, astronomers have noticed some ancient planets do not follow that process as they orbit too far away from their host stars to, in the words of Tuthill and Norris, have "run the business of planet building".

Adding to the mystery, astronomers could not tell how such planets were actually formed, given they were billions of years old.

That age problem, however, is not the case with the newest planet which is likewise distant from its host star, called AB Aurigae. To put it into perspective, the planet is about 93 times further away from AB Aurigae than the Earth is from the Sun. 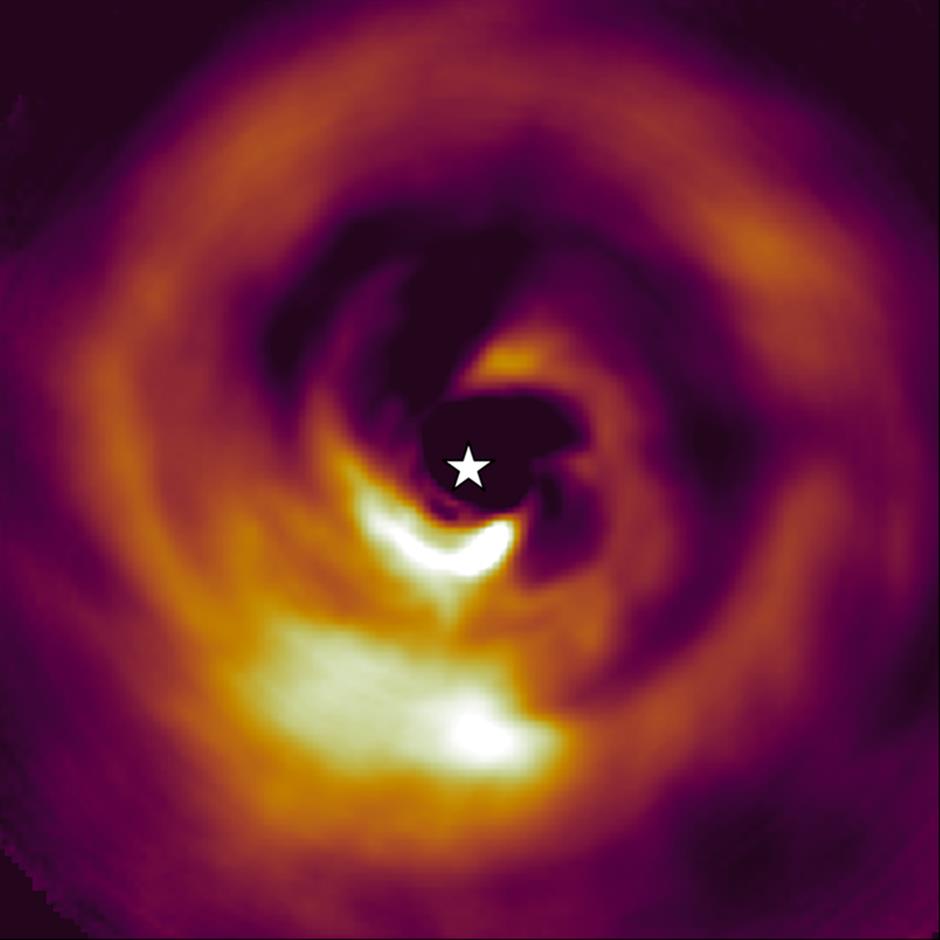 The disk around AB Aurigae. The forming planet is the bright blob at the bottom. Currie et al. / Nature Astronomy, provided by Peter Tuthill and Barnaby Norris.

Tuthill and Norris, therefore, believe the planet, dubbed AB Aurigae b, will provide new clues and ultimately an alternative theory into the origins of at least some planets.

They do, however, concede many unknowns will continue to linger with Norris saying "when it comes to understanding planet formation, this is just the tip of the iceberg".

"So much is unknown about how planets, and solar systems like our own, are formed," he said.