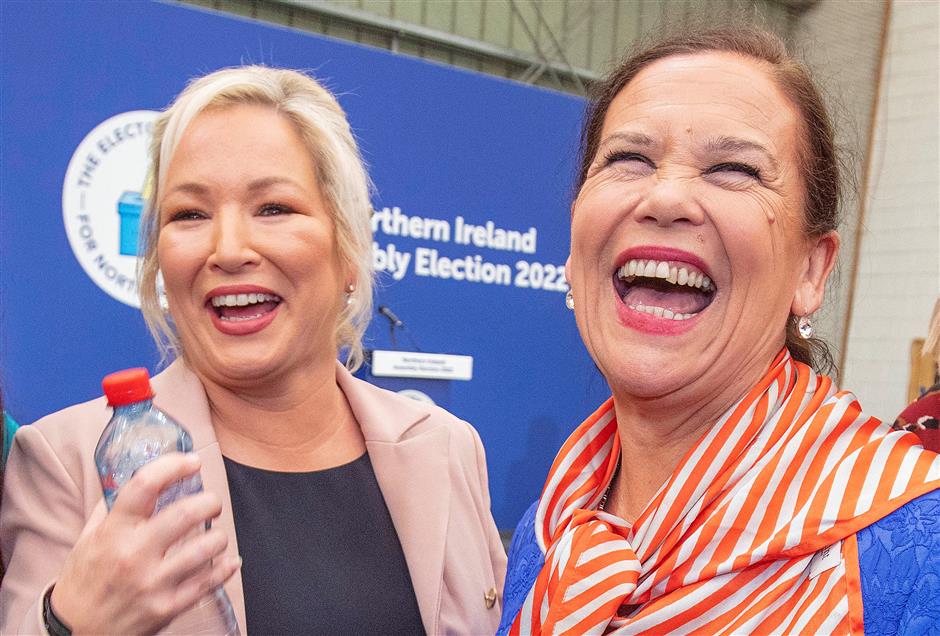 Once the political wing of the paramilitary IRA, Sinn Fein won enough seats in the devolved legislature to nominate its Northern Ireland leader Michelle O'Neill as first minister.

The result from Thursday's election for the Stormont assembly marked a potentially seismic shift, a century after Northern Ireland was carved out as a Protestant fiefdom under British rule.

O'Neill said the result "ushers in a new era" for the divided territory, and Sinn Fein said it wanted a referendum on reuniting Ireland within five years.

But only the UK government can grant a referendum, and Northern Ireland Secretary Brandon Lewis noted that a majority of voters overall still backed the constitutional status quo.

Ahead of convening party leaders for talks in Belfast on Monday, Lewis recognised nevertheless that Sinn Fein's triumph was a "significant moment for Northern Ireland".

"I think it is an important moment to show that everybody can work together, regardless of who is first and deputy first minister," he told BBC television.

"That's what democracy is about," Lewis added, urging the leaders to "work with each other to find a way to come back into Stormont (and) form the executive".

The Irish and US governments also urged Northern Ireland's leaders to form a new power-sharing executive, under the terms of a 1998 peace deal that ended three decades of bloodshed.

Johnson under pressure too

With all 90 Stormont seats filled from Thursday's proportional voting, Sinn Fein won 27 seats, ahead of the Democratic Unionist Party (DUP) on 25 and the cross-community Alliance party on 17.

"The people have spoken, and our job is now to turn up. I expect others to turn up also," O'Neill told reporters.

Lewis said the government still preferred to negotiate a solution with Brussels -- but reserved the right to act unilaterally to protect intra-UK trade and Northern Ireland's constitutional status.

"It's very disappointing that what we're hearing is the EU is already saying it won't show any flexibility," the minister said.

While Sinn Fein will get to nominate a first minister, Northern Ireland's government can only form under the 1998 deal if the DUP agrees to take part and serve in the role of deputy first minister.

The parties will have 24 weeks to resolve their differences or face a new election.

"You could easily see everyone taking the full six months for negotiation," commented Katy Hayward, professor of political sociology at Queen's University Belfast.

She noted the DUP wants the protocol removed, Sinn Fein has longstanding demands to protect the Irish language and the Alliance wants an overhaul at Stormont to recognise the rise of the middle ground -- none of which can be easily achieved.

"But given the urgency of crises in the cost of living and healthcare, we do need an executive formed and then can think of bigger adjustments to the (1998) Good Friday Agreement when we're in a better place," Hayward told AFP.