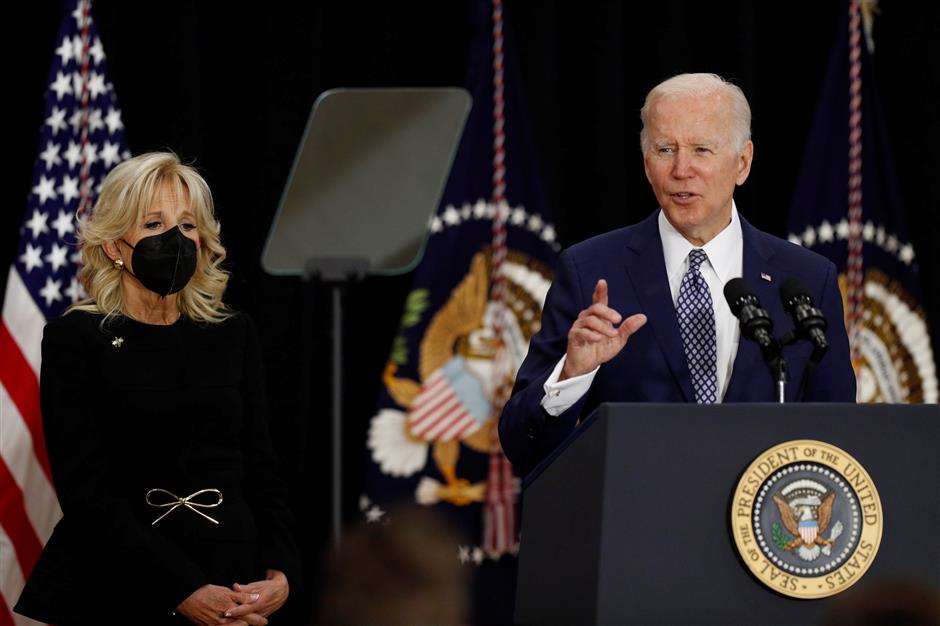 US President Joe Biden on Tuesday called out what he branded the "poison" of white supremacist ideology behind a deadly mass shooting in Buffalo, New York, and said that racism is being stoked for political gain.

Speaking in the city where a white teen is accused of murdering 10 African Americans in a neighborhood supermarket, Biden said, "What happened here is simple and straightforward: terrorism, terrorism. Domestic terrorism."

"White supremacy is a poison running through our body politic and it's been allowed to fester right in front of our eyes," Biden said, condemning "those who spread the lie for power, for political gain and for profit."

In a searing speech that also called for restrictions on ownership of assault-style rifles, Biden listed the victims, fighting tears as he recounted how one of the dead, named 53-year-old Andre Mackniel, had been buying a birthday cake for his 3-year-old son when the gunman entered the store.

Biden's harshest comments were directed at what he described as the "perverse ideology" of white supremacists that police say inspired the shooter.

In a manifesto, the alleged mass killer referred to the so-called "replacement theory," which claims the existence of a leftist plot to overwhelm the white population with non-white immigrants.

Biden described "a hate that through the media and politics (and) the Internet has radicalized angry, alienated, lost and isolated individuals into falsely believing that they will be replaced – that's the word, replaced – by 'the other.'"

"No more. I mean no more. We need to say as clearly and forcefully as we can that the ideology of white supremacy has no place in America," he said to applause.

'Soul of the nation'

Earlier on Tuesday, Biden and his wife, Jill Biden, laid a bouquet at a makeshift memorial outside the supermarket where the slaughter took place.

A strong breeze tugged at balloons and flowers piled under a tree while the Bidens paid their respects, the president making the sign of the cross before giving way to a delegation of elected officials laying their own bouquets.

Biden then went into private meetings with relatives of the victims and first responders.

Payton Gendron, the 18-year-old murder suspect, planned the shooting for months, and scoped out the location ahead of time, according to a stream of posts attributed to him on social media sites.

Gendron first wrote about killing Black people in December and decided to target the Buffalo store based on its large surrounding African American population, according to US media analysis of hundreds of pages of messages.

The so-called replacement plot allegedly motivating Gendron is a conspiracy theory that, like bizarre QAnon beliefs, has spread from the furthest fringes of society to surprisingly mainstream areas – most notably Tucker Carlson's enormously influential nightly talk show on Fox News.

The White House has steadfastly refused to join some who directly blame Carlson and several prominent Republicans for promoting the theory and, by extension, bearing responsibility for white supremacist violence.

However, Biden's strong comments in Buffalo left little doubt that he was referring not just to the actual shooter but the powerful voices spreading the ideology.

He recalled that he had left retirement to take on Donald Trump in the 2020 presidential election after being shocked that Trump refused to clearly condemn neo-Nazis demonstrating in Charlottesville, Virginia.

"Democracy is in danger like it hasn't been in my lifetime," he said. "Hate and fear have been given too much oxygen by those who pretend to love America. They don't understand America.

"Now's the time for people of all races, of every background, to speak up as a majority of America and reject white supremacy," he said. "We can't allow them to destroy the soul of the nation."

Later, Biden was asked by reporters about Carlson and the Republican members of Congress who have echoed supremacist language.

Biden did not name names but said "anybody who echoes a replacement (theory) is to blame," even if "not for this particular crime."