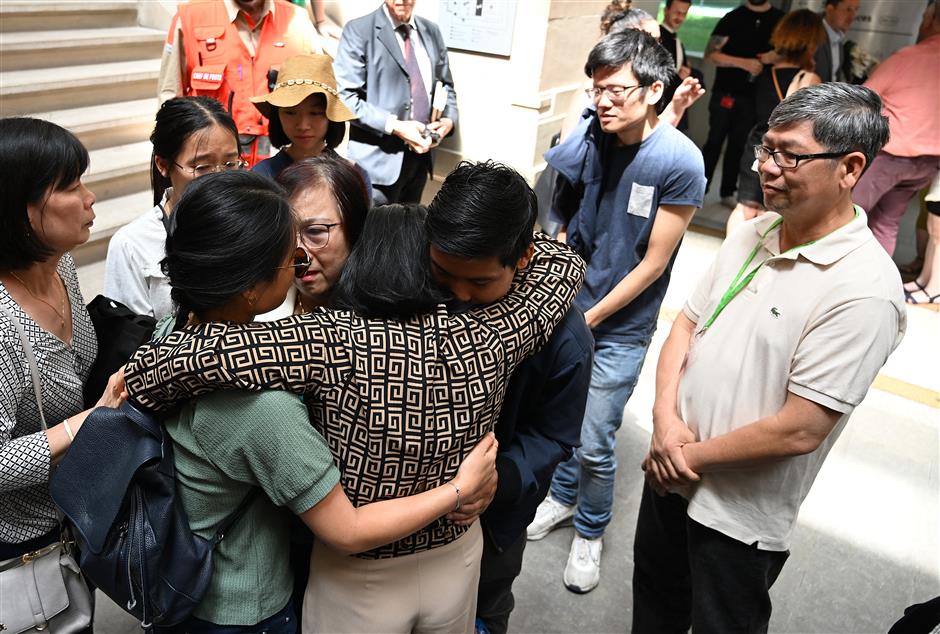 Relatives and father Tri (right) of Sophie Le Tan react after the verdict at the end of the trial of Jean-Marc Reiser, accused of murdering student Sophie Le Tan in 2018, at the courthouse of Strasbourg, eastern France, on Tuesday.

A French court on Tuesday sentenced a convicted rapist to life in prison for the murder of a student who he claimed until the end to have killed accidentally.

Sophie Le Tan vanished on her 20th birthday after failing to return from what was supposed to be a visit to a rented apartment outside the eastern city of Strasbourg on September 8, 2018.

She was described by those close to her as a serious and likeable young woman.

Her dismembered body was found by hikers in a forest in October 2019.

Jean-Marc Reiser, now 61, was arrested a week after she disappeared and was tracked down by police through phone records.

After speaking to other students who responded to the same property advert only to be stood up, investigators believe Reiser used it to lure young women, observing the agreed meeting spot to see if they came alone.

A search of his flat uncovered large bloodstains that had been carefully cleaned up, as well as Le Tan's DNA on a saw in the cellar, according to court documents.

For two years, Reiser denied any involvement in Le Tan's death, before claiming in January 2021 that she died in a fall after he struck her.

He stuck to that version of events until the end of the trial.

"There was nothing premeditated about that madness, for which I still have no explanation," he told the court on Tuesday.

"I had had no reason to be angry at Sophie Le Tan. I had nothing against her," he said.

But after two hours of deliberations, the jury sentenced him to life in prison for murder, without the possibility of parole for the first 22 years.

After Le Tan's remains were discovered, court documents said it was no longer possible to determine the cause of her death or whether she had suffered sexual violence.

Addressing Le Tan's mother, father and other family members in the courtroom, Reiser said he accepted that they would never forgive him.

"I am guilty of their daughter's death even if I never wanted it. This will haunt me for the rest of my days," he said.

Reiser was previously convicted of rape in 2003 and has served several prison sentences. In 2001, he was acquitted for lack of evidence in connection with another disappearance dating back to 1987.

Reiser was raised in eastern France by an alcoholic father and had held a variety of jobs.

"He had delusions of grandeur," lawyer Jean-Pierre Degeneve, who defended Reiser in previous cases, said during the trial.

In May, Reiser was convicted of witness tampering relating to a former girlfriend, who described his rages and physical violence while they were together.